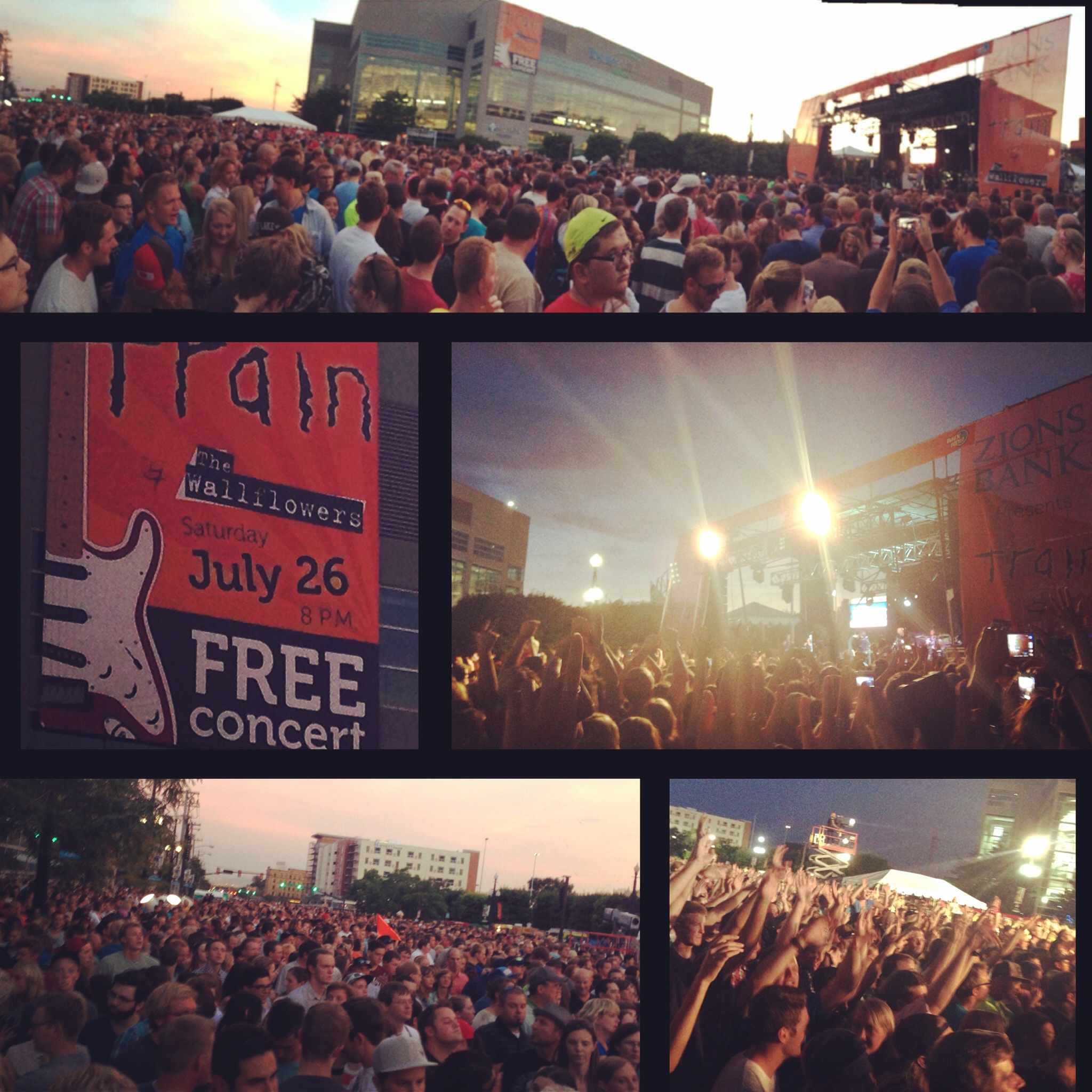 There is such an interesting dynamic to a free concert. For starters, not everyone is necessarily a fan of the band performing. Many times they are just there because they didn’t have to pay for it. Free concerts are generally not held in typical concert venues, which lead people to be confused at what type of concert this will be. Do they bring their own seating or blankets? Is this a stand up show? Is this even my kind of music? This past weekend I was able to observe all of this at the free Train concert in downtown Salt Lake City. The concert was performed in the shadow of Energy Solutions Arena on a closed off 300 W block. The crowd was diverse. Well, this is Utah, by diverse I should clarify by saying there were people of all ages at the show. Some were confused, and brought their lawn chairs and blankets as close as 30 feet from the stage. Maybe Mix 107.9, the radio station that hosted the event, should have announced this wasn’t a concert in the park, it was a show in the middle of the street where people would be standing the whole time. Anyway, these people were bummed once this concert started. I imagine they either couldn’t see, had their blankets trampled, changed locations, or closed camp and stood like the rest of the throng.

I always feel the need to divulge my level of interest in the particular bands I review. To be perfectly honest, I’m not a Train fan. Although I do respect them for their longevity, and their success in the music business. I found it surprising that a band that could probably fill the building next door on their own tour, was willing to play a free show to close the “Days of ‘47” celebration and Pioneer Day weekend. Don’t get me wrong, I’m sure they were paid handsomely and I overheard some mega fans state that some band members have property in Park City. If this is true, it was an easy payday, and easy commute for the band during what appears to be their touring off season.

It was fun to see die hard fans in pure bliss that they were seeing their favorite band for free! But there seemed to be a fun atmosphere in the air, that we were all there for a good time, with a band, fan or not, whose songs we know whether we want to or not.

The show was opened by mid nineties “one hit wonders” The Wallflowers. For me, this was a great choice for an opener. They are a band I’ve thought might be fun to see, but I don’t know that I would make it a point to go to their show. The thing with most “one hit wonders”, they actually have more hits than the one. The Wallflowers opened with “Three Marlenas” which was actually a hit for them. They also played “6th Avenue Heartache” and, “The Difference”, both hits for them. But let’s be honest, if we’re going to see The Wallflowers, we want to hear their big hit “One Headlight”. And of course, they did not disappoint. Sometimes I feel for these bands, because they probably have other good songs that they would love to play. But at the same time, I know tons of artists who would give anything to have just one hit. So, I don’t have too much sympathy for them. They’re still doing shows almost 20 years after that song came out.

There was a quick turn around with a DJ from Mix 107.9 coming out and preparing the crowd for Train. He noted that there were more than 20,000 in attendance. When I looked behind me, I couldn’t see the end of the crowd. It looked like people went on for forever. Train came out strong opening with one of their hits “Calling All Angels”. This was a song where fans and people like me, just there for the experience, could get into. The crowd was immediately into this show. To me their only misstep was trying to cover Led Zeppelin’s “Ramble On”. I’m sorry, but that is just too far of a reach for me. And I don’t think the crowd loved it either. But we moved past that musical blasphemy, and got back on track. They returned to their hit list with what I believe was their first big hit “Meet Virginia”. The thing that has always impressed me with Train, is the fact that when you think they’re done producing radio friendly hits, they’re not. When I heard “Meet Virginia” back in 1999, I thought this was a group that would be popular until about 2002, and then they’d ride those hits the rest of their career. But here we are in 2014, and they’re still releasing songs that will most certainly chart. Which was proved when they sang a yet to be released “Bulletproof Picaso”. The way the crowd reacted to this new song, I’m certain I’ll be hearing it for years to come at my local grocery store.
Above anything else, Train are the consummate professionals. They know just how to entertain a crowd like this. They knew not everyone there were Train fans. Lead singer Pat Monahan did a great job interacting with the crowd. After the first song he jumped to the security aisle and told everyone along the aisle to pull out their phones and he’d let them take selfies with him. PS-Selfie is such an awful word! I imagine he does that at a lot of his shows, but it was clear to me that the crowd, even those no where near the security aisle, were excited at the thought. He also brought up about 20 or so girls/women during the song “Mermaid” to be his backup singers. He brought up a young girl to sing “Bruises” with him. Again, all of these things may be done at all of their shows. I wouldn’t know. But like I’ve always said, when playing a show in the middle of the street, best to interact with and involve the audience.
The main set concluded with monster hits “Hey Soul Sister” and “Drive By”. Young and old alike at this show were singing along, and waving their arms in unison at Pat’s command. Train came back and sang “Marry Me”, which I’m sure reminded many of their first dance at their wedding, or opened the door for some sweet public making out that never makes anyone in close proximity uncomfortable. They couldn’t do a show without performing their enormous hit “Drops of Jupiter”. The sing a-long was defining. It was irresistible not to join in. They closed the show with an interesting choice. They ditched their songs to perform “Dream On” by Aerosmith. After just experiencing what I believe was a failed attempt at Led Zeppelin, I was nervous as to how this would go. But to the general public, this song is probably more well known these days. And because this was done during the encore, Train could have probably performed “Hangin’ Tough” by New Kids on the Block, and the crowd would have been in just as much of a frenzie. Come to think of it, I really wish I would have heard that! Anyway, Train did their thing with the song. The crowd was way into it, the band sounded great, and Pat Monahan actually killed it. He it all the notes you have to hit to make that song rad. I was actually impressed.
As someone who isn’t a card carrying member of the Train fan club, I walked away more than satisfied with the show. As I mentioned, they are true professionals. They came to entertain a crowd, and entertain they did. Their fans were happy, people just looking for good times, found it, and even when I asked a friend who doesn’t like Train at all what his thoughts were, he said “It was well put together.” I admire a band, who can come out, and perform successfully to a crowd that isn’t theirs. So for that I say choo choo Train. Choo effin Choo.

Calling All Angels
Save Me, San Francisco
If its Love
Get To Me
Ramble On (Led Zeppelin cover)
Meet Virginia
50 Ways to Say Goodbye
Mermaid (Beauty in the Water)
Bruises
Free
Bulletproof Picasso
Angel in Blue Jeans
Hey Soul Sister
Drive By

Marry Me
Drops of Jupiter
Dream On (Aerosmith cover)