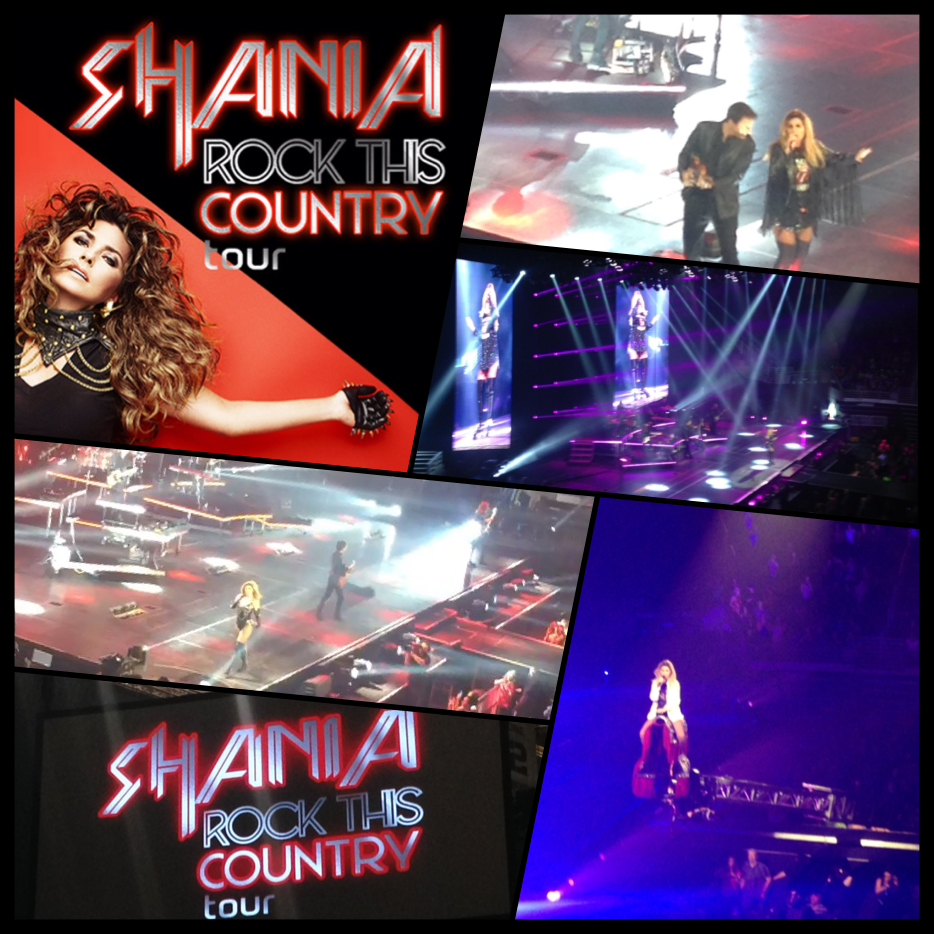 What a night it was this past Saturday when Shania Twain brought her “Rock this Country” tour to the Energy Solutions Arena. There is something about going to a concert on a Saturday evening. You have a day off of work, to relax and have all the energy you need to get into a concert. We’re especially grateful for weekend shows here in Utah. Most big shows will stop by mid week on their way to a larger city. So when we actually get a weekend show, the appreciation from the crowd in obvious.

As I waited for Shania Twain to start I looked around the venue to see what kind of crowd was here to see the Queen of Country. The age range of the audience was across the board. I had a girl not older than 4 sitting next to me, girls no older than 14 to the other side of me, and a couple no younger than 74 behind me. But the common theme was the eager anticipation of seeing one of their favorite artists, a star who hadn’t been on tour in over a decade, and one who has sold around 80 million albums. The anxious anticipation was intense!

After about a half hour of set up, Joan Jett’s “I Love Rock n’ Roll” played over the speakers. The entire audience sang along, as the lights slowly dimmed, and in unison the crowd rose to their feet. It was time for Shania!

After a instrumental intro that had a video montage/ light show, the stage fog had reached it’s maximum, and sure enough Shania Twain rose from beneath the stage singing her opening song, appropriately, “Rock this Country”. She continued to rise until she was about 30 feet in the air, and then came down to the stage about mid song. Energy Solutions Arena was on fire. Sometimes literally with the pyrotechnics going off!

Before I move on, I’m sure you’re wondering, “Really dude, Shania Twain?” And I have to say with no apologies, YES, Shania Freaking Twain! (Edited for the kids. This is a family friendly blog folks.) I mean, I get it. She’s doesn’t write songs with as much deepest, most artistic, or most edgy songs. And yes, many of her songs have a cheesy spoken sentence before the song starts, but I dare you to not tap your foot during “If You’re Not in it For Love”, or not have “Don’t Be Stupid” stuck in your head for hours. She is simply good times. Her songs are fun, and her lyrics are positive, and people seem to be able to listen to her over and over and over again. I think of Shania Twain as the musical version of the TV show “Friends”. Sure that show might not have been world changing, or ground breaking. But it was relatable, fun, and people still keep going back to watch the reruns. So it is with Shania Twain.

It has been so long since Shania toured, that you almost forget just how many hit songs she has. And she just kept rolling them out. No new stuff for us to sit through until our next favorite hit. Shania plans to release a new album next year, and that would be an appropriate time for her to sing her new songs live, but she is claiming that this is her final tour. Let’s hope not.

I think the best part about seeing a Shania Twain concert is how much she wants to entertain the audience. She pulled out almost every trick in the book. She had the pyrotechnics of a heavy metal show, stage lighting that would rival any tour out today, and of course a catwalk so that she could get out into the middle of the arena whenever she wanted. She also rode on a small cart during “Any Man of Mine” throughout the entire floor of the arena, high fiving, encouraging a sing a long, and taking selfies with her phone and selfie stick. She sat on a saddle, and made her song “Up!” literal by being raised by a huge mechanical crane (Think Disneyland’s Dumbo ride, but on a saddle) and soared around the arena singing her hit song.

But despite the special effects, and flash, it really does come down to the music. She sang acoustic versions of a couple songs. Just sitting in a chair, telling stories, and engaging with the crowd. The backup band is flawless, from their instruments, to their harmonies, to their crowd engagement, they are a really great addition to the show. Of course everything in the show is totally polished, and rehearsed perfectly, even the stories, or where she walks and when, but it doesn’t feel like that. It feels like this was the only show on her tour. She has a way of making her audience feel that special. Which is what made me fall in love with her in the first place.

Way way back in the late nineties when Shania was exploding with her multi platinum selling album “Come on Over”, a college buddy of mine asked me if I wanted to go see Shania that night at the Hollywood Bowl. My initial thought was , why would I, a guy, want to see Shania Twain. Other than the fact that she’s great looking, of course. Keep in mind, this was the era of “Girl Power!”, with the Spice Girls being huge, No Doubt being huge, and Shania Twain’s empowering songs like, “I Feel Like a Woman”, “Any Man of Mine”, and “Honey, I’m home”. I felt like I might not be the target audience for a Shania Twain show. Well, somehow, someway my friend convinced me to go. (She had a way of doing that.) Just like this past Saturday night, Shania entertained the crowd from the front row to the very back seat. I would know, because I’m pretty sure that’s where I was. But she made me feel as if I was in the front row. In fact, she even called out the ticket number of the seat just down the aisle from me, and invited them and a friend to sit in two front row seats she had saved for them. How awesome is that?! So from then on, I’ve admired her talent.

The only thing that bothered me about on Saturday night was watching the guys who were clearly dragged to the show by their wife or girlfriend. I get it, it’s not your kind of music, you’re not a Shania Twain fan. But you don’t have to spend the whole night proving it to the people around you. You’re there, obviously your significant other wants you to be there to have a good time with her. So have fun douches! You’re at a very entertaining show. No one is going to ask for your man card upon exiting the arena, no one will think you’re gay if you sing along and clap your hands to a couple Shania Twain songs, no one is going to blame you for having a good time even though this isn’t your thing. Get over yourselves. Sheesh! (Family friendly. Although I did say douche earlier. Oops.) I’m pretty sure you’ll make your girlfriend or wife’s night if you try to have a good time during what is clearly and fun and entertaining night. Anyway, my two cents to the douches of earth.

Clearly this was a night to be remembered. Shania departed after singing “Any Man of Mine”, and it was clear the crowd wanted more. This is probably the cheesiest thing I’ll ever say in one of my reviews, but I love seeing people have such a good time. From my seat I could see the people in the front row and I could see a couple of friends of mine way up in the upper level, dancing, smiling, and singing along. It feels good to be a part of a night like this. I’m not saying that Shania Twain is for everyone. And that’s fine if you don’t enjoy her music. But I dare you to not have a great time at her concert.

Setlist
Rock This Country!
Honey, I’m Home
You Win My Love
Whose Bed Have Your Boots Been Under?
I Ain’t No Quitter
Love Gets Me Every Time
Don’t Be Stupid (You Know I Love You)
Any Man of Mine
I’m Gonna Getcha Good!
Come on Over
Party For Two (with Gavin DeGraw)
Up!
Today Is Your Day
No One Needs to Know
You’re Still the One
From This Moment On
That Don’t Impress Me Much
(If You’re Not in It for Love) I’m Outta Here!
Encore:
Man! I Feel Like a Woman!