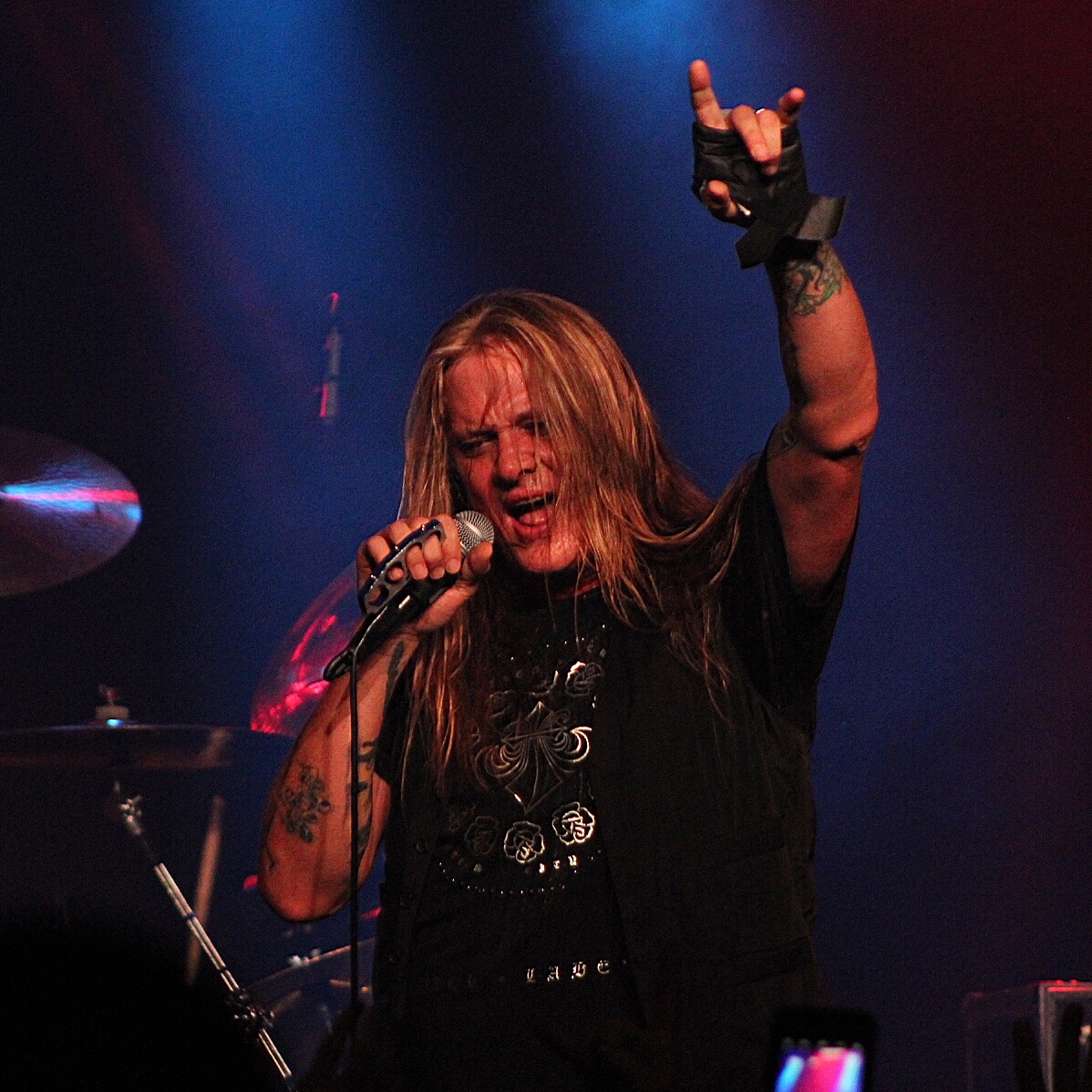 When Sebastian Bach stepped out on to The Commonwealth Room stage, all of a sudden everyone in attendance time-warped back to the late 1980’s.  I was standing at the front of the house waiting for the show to start, and I was talking to a man who had loved Sebastian Bach and his former band Skid Row since their inception.  This was going to be his first time seeing him perform and he couldn’t have been more excited. If I was to guess, the man was in his late 50’s. Once the show started, I looked back at him and he looked as if he was in his twenties again.  Of course, it was the way his eyes were looking at the stage, but it was crazy how youthful he all of a sudden looked.

There was another man in front of me wearing a studded jean vest, a headband, and hair that fit the hair metal stylings of 1988.  He was shouting the words to every song, and throwing up his index and pinky finger all night. Throughout the entire concert, I thought he was a young guy dressing up for the show.  Many times at Def Leppard or Poison shows you might see people with wigs and band shirts from Hot Topic. So I just assumed the guy in front of me was one of those guys.   I’m never sure if they’re paying tribute to that era or making fun of it.  After the show was over, the guy turned around and he couldn’t have been younger than 60. A 60 year old in fantastic shape I might add, but I was shocked.  Was it possible that the power of Bach made us all younger for a couple of hours?  That’s the only theory I got. 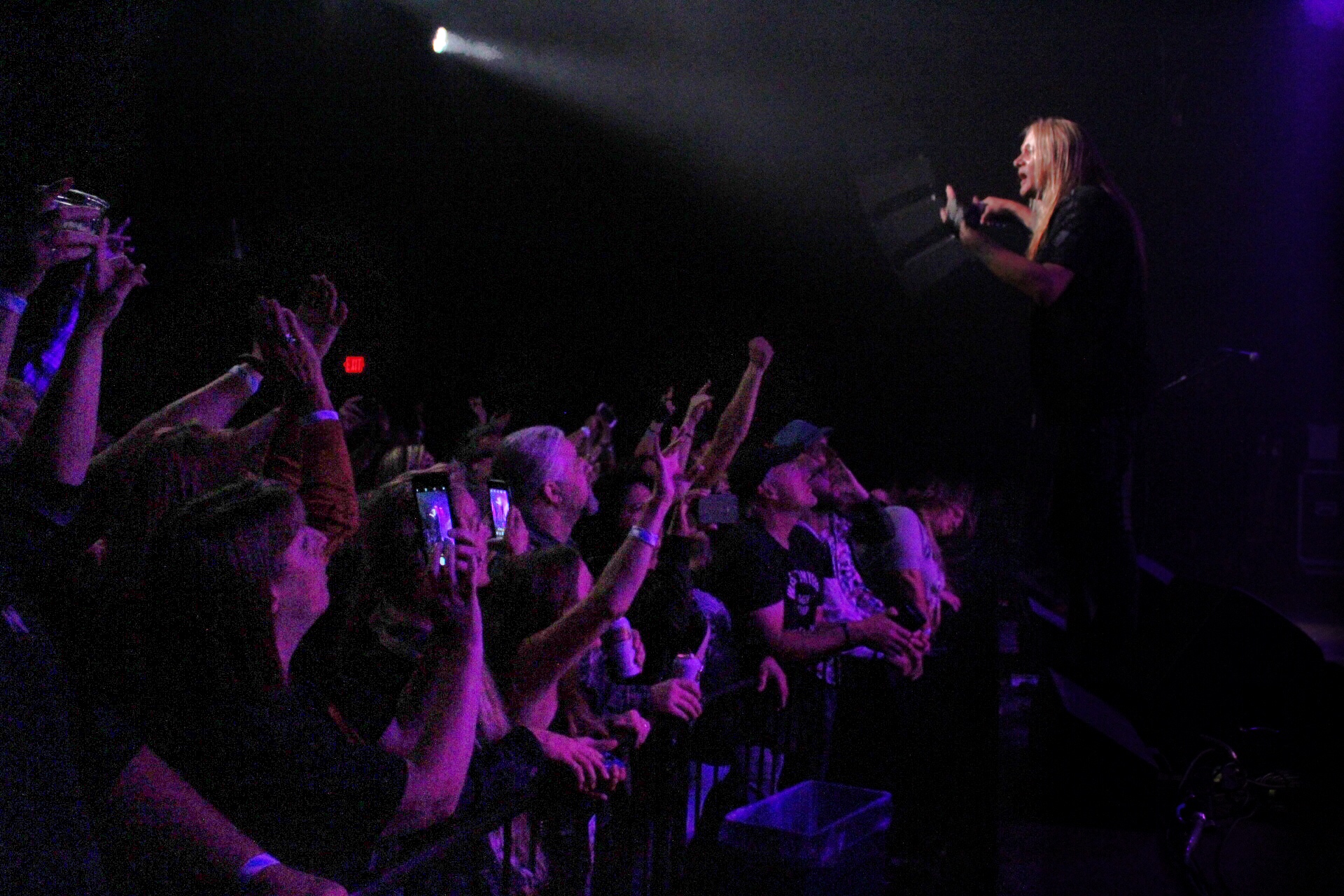 Sebastian came out fully energized and opened with the title track to Skid Row’s sophomore album Slave to the Grind.  He seemed in exceptionally good spirits and would later reveal that his aunt was in attendance. I think that gave him a little extra pep.

Bach told us about the first time playing in Utah with Skid Row opening for Bon Jovi.  He said they were in town on a Sunday in 1989 and they went to buy beer. They quickly learned just how difficult that would be.  He thought that this meant that Utah was a very tame place. But he quickly learned the next night at the show how unhinged rock fans can get in Utah! 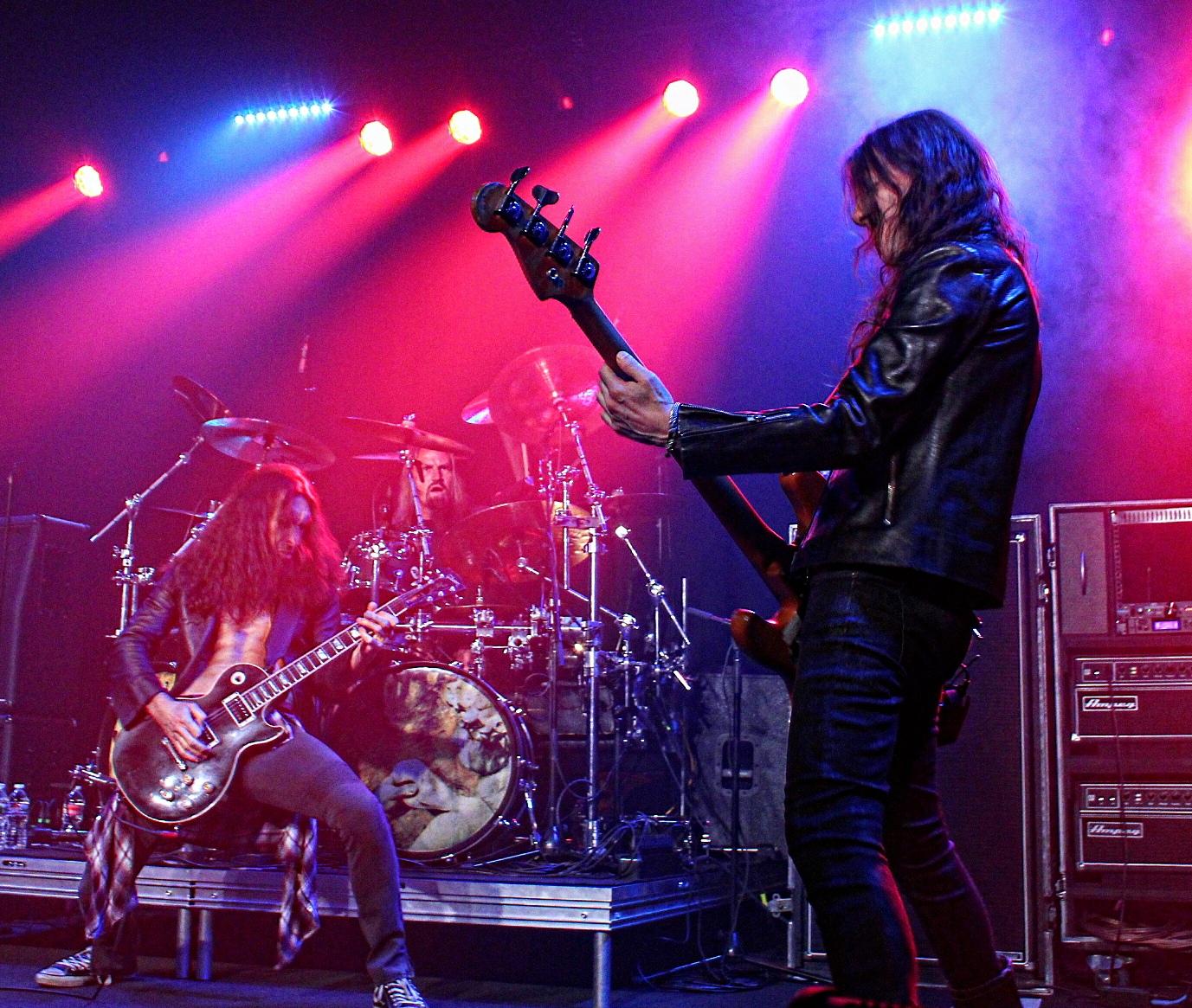 The thing that stood out above all else on the night was Sebastian Bach’s voice.  I thought he sounded great. He mentioned a number of times that he was now 50 years old.  Many rockers have said goodbye to their pipes long before they hit 40. But Bach’s voice has held up.  Of course, it doesn’t sound the same as it did when he was in Skid Row, but considering how long ago that was it makes sense. And yes there were effects on his voice, especially for the high notes, but I’ve heard other hard rock singers use these effects and they don’t work if you can’t sing. I remember reading an interview back when Sebastian was playing the title role in the rock opera Jesus Christ Superstar.  The interviewer asked him what he does to warm up. Bach stated that he sang along with Iron Maiden. Talk about a voice stretching warm up! I wonder if he still does that because Sebastian Bach can still sing some crazy notes. 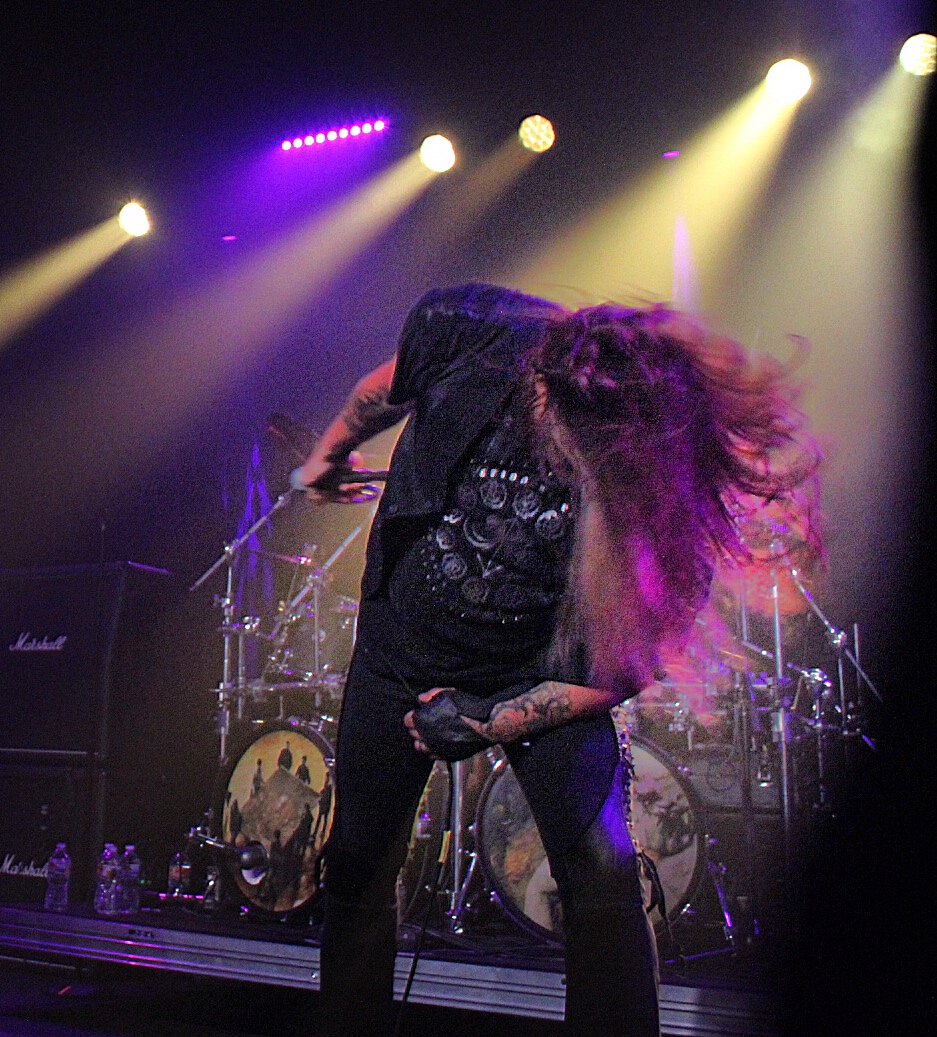 I remember when I was young I was reading a music magazine and they had a “New artists to pay attention to”  page. For some reason, I still remember that Skid Row and The Gypsy Kings were on that page. I’d say they’ve both stamped out a solid thirty-year career to one degree or another.  So I think for myself and the majority of those at The Commonwealth Room, the songs from that first self-titled Skid Row album were the major highlights. When “18 and Life” started there was a buzz in the crowd.  Cell phones lit up the floor as almost half the people recorded the song to send to their friends who missed seeing it live. As I mentioned, Bach’s voice was great all night, and this song was no exception. The same goes for the power ballad “I Remember You”.  People were swaying their hands in the air, and they were singing out the chorus in unison every time Bach pointed his brass-knuckled microphone at us. And of course “Youth Gone Wild” was a huge crowd pleaser. People were screaming the lyrics back at Sebastian Bach as if he didn’t know them and his life depended on him learning them immediately.

Sebastian had a lot of fun with his fans.  He consistently high fived, gave knucks, and even sang into people’s cell phones as they filmed him.  He even had some fun with me while I was taking photos as can be seen in the picture below.  I think this is what endears him to his fans.  He appreciates them, and they can feel it. 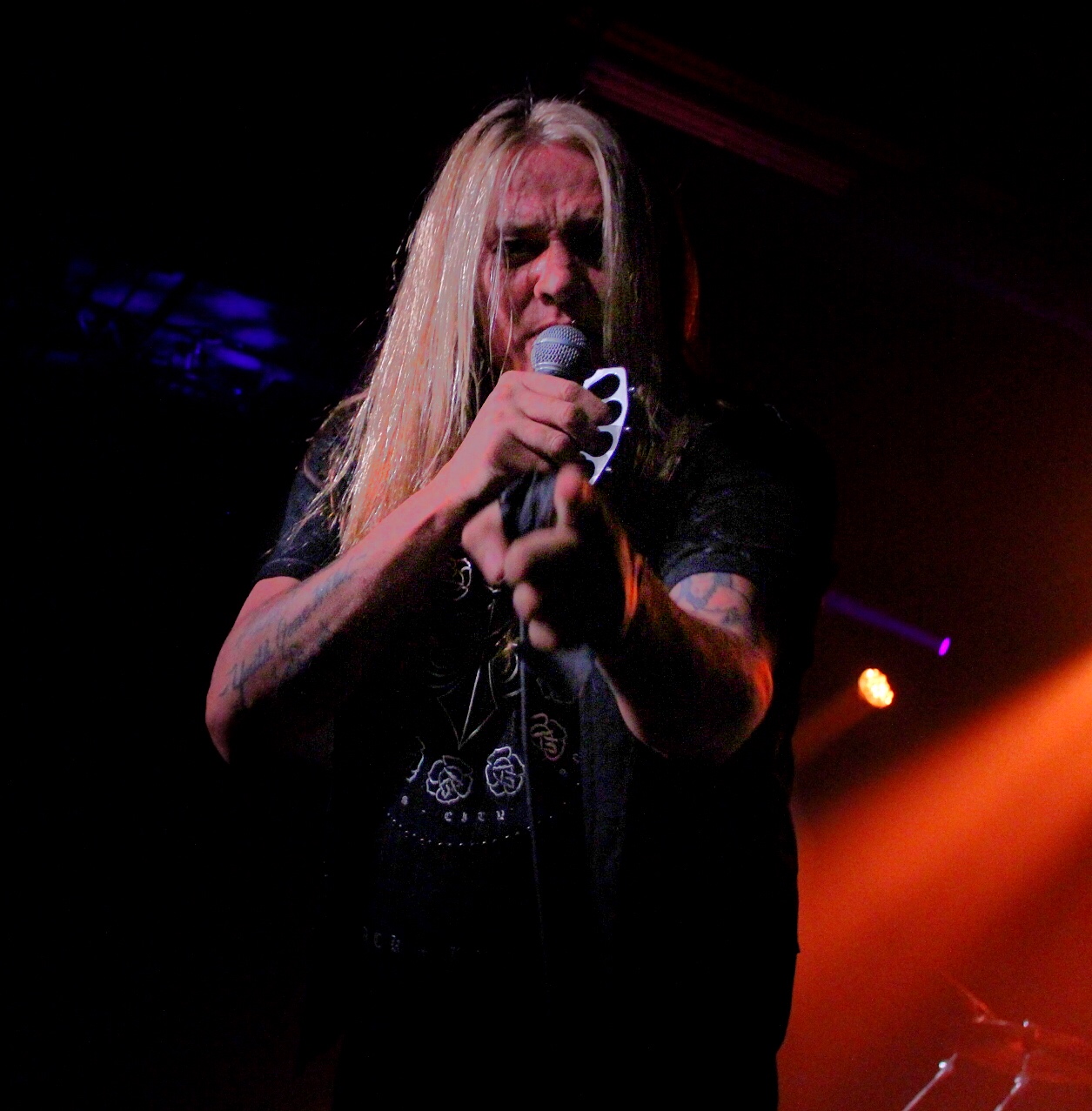 Sebastian joked about doing an encore by just hiding behind the stage curtain while we cheered.  I’d imagine those in the front row could totally see him. I thought it was funny. Outside of the big hits, my favorite song of the night was Bach’s cover of AC/DC’s “TNT”.  I love hearing covers from bands within a similar genre. They tend to keep it close to the original, but their vocals and their slight adjustments make it a great performance piece. 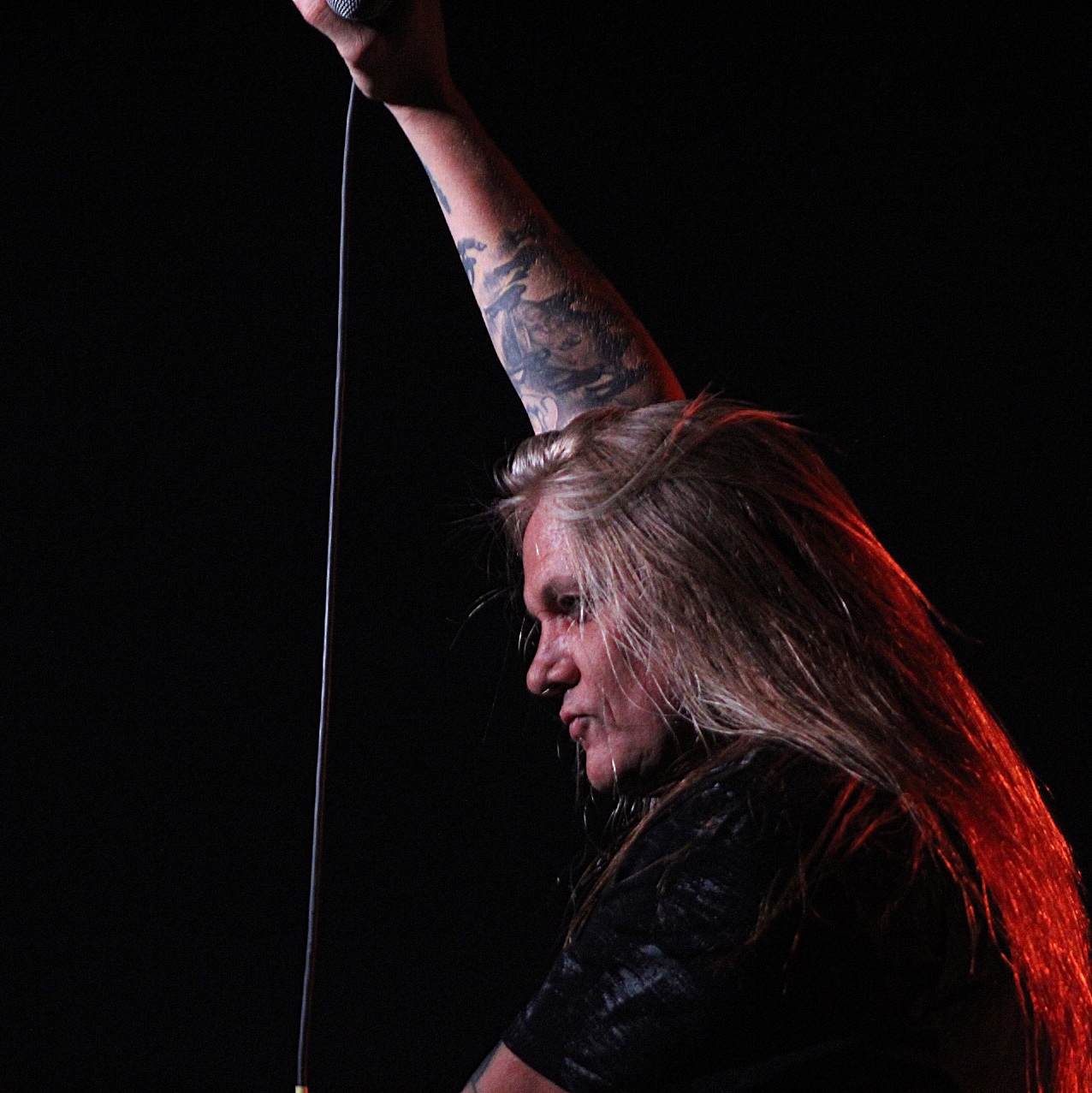 Sebastian and the band left, the lights came on, and we instantly became a little older again. But for that small window of time, I could tell how happy people were to be back in that time and place.  Metal, Hard Rock or Hair Metal from the 80’s was fun and carefree and I don’t think it took itself too seriously. I think that’s why people liked it so much. I remember a scene in the Mickey Rourke, Marisa Tomei film The Wrestler where Mickey’s character has taken Marisa’s character to a bar and RATT’s song “Round and Round” played through the speakers.  Rourke begins to talk about this music, how fun it was and how grunge ruined it. When I was watching Sebastian Bach perform, this scene came to mind and I totally got it.