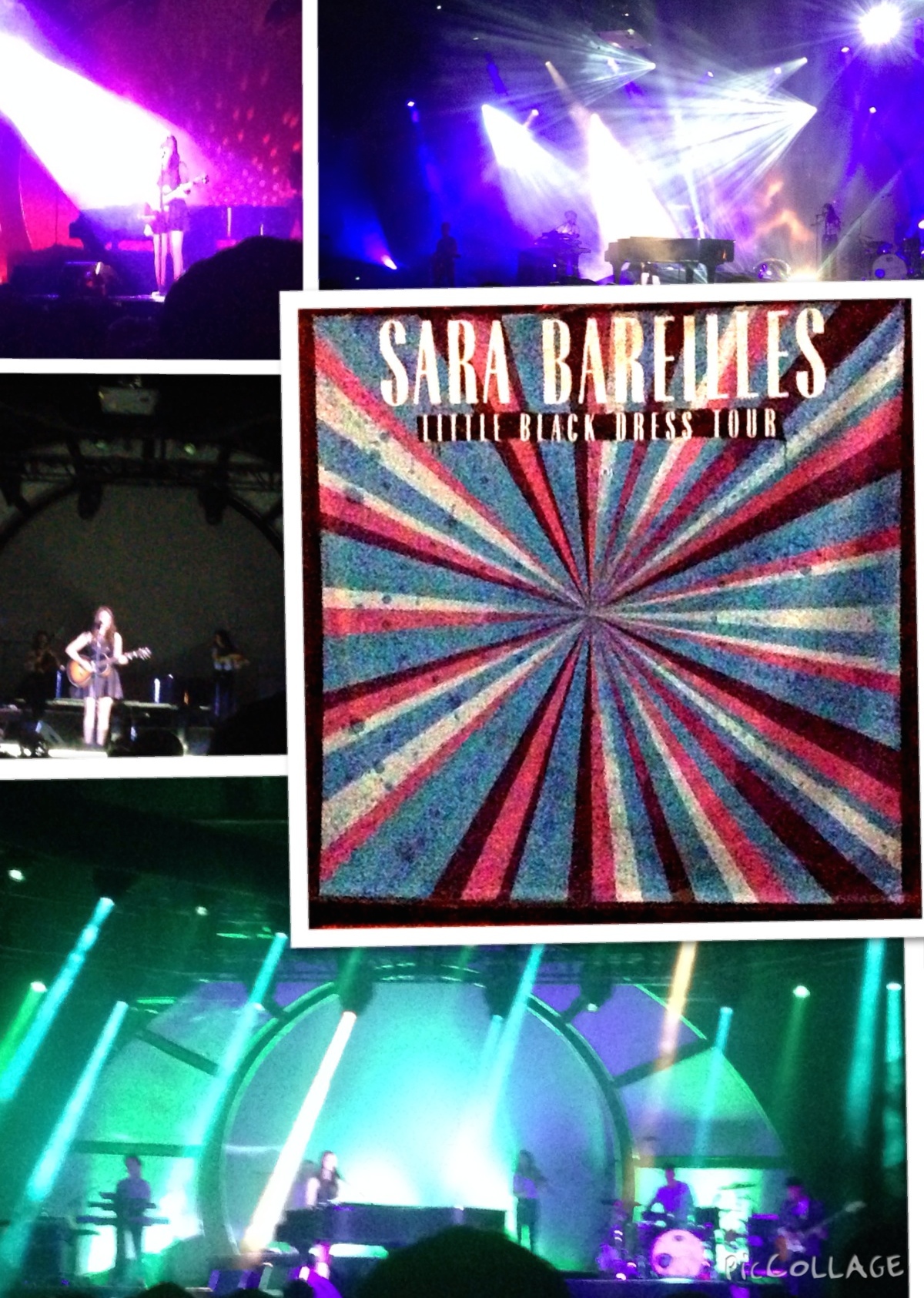 I was introduced to Sara Bareilles only a few years ago, when my sister and her husband went to see Sara at the Palladium in Los Angeles, CA. My sister being a huge fan, strongly encouraged (forced) her husband to go. But he like I imagine so many other men, came away very impressed. Sara has a huge female following and because of that, many men seem to feel like she is not for them. I think because she is such and honest songwriter, men may feel that because they are coming from a female’s perspective, they are not relatable songs. I’ll admit, I was of that belief as well. But when I spoke with my brother in law after that L.A. show, he came away very impressed. He came away a fan, and coming from a someone who is into Social Distortion, that says a lot to me. I thought, maybe I should give Ms. Bareilles a second chance. So I went to youtube and searched around, and came across Sara in concert singing a cover of Coldplay’s “Yellow”. Which is a song I very much like. If you haven’t heard this version, do yourself a favor and give it a listen. I know this sounds dramatic, but it honestly gave me chills to the point of almost getting emotional. Weird right? Well, maybe not. Sara Bareilles version of Yellow is simple, yet beautiful. So, after hearing that voice, I was hooked.

Now, fast forward to last night. Initially I was very surprised that this concert was not sold out. I easily walked up to the box office and bought a ticket just as the final opener was finishing her last song. Then I remembered that the concert was on a Sunday. With the large Latter Day Saint population in Utah, who generally speaking do not go out on Sunday, it was no surprise that the show was not sold out. I have no doubt that if this concert was held on Monday night, it would have been sold out months ago. With that being said, it’s not like there were 50 people there. I asked the box office what the attendance was, and they told me there were around 2,000 in attendance. The Saltair holds 3,500 so the place was plenty full.

The Great Saltair is an awesome place to see a concert. The whole place is general admission with a 21+balcony that wraps around the entire venue. Also, it’s so fun to see an artist in a more intimate venue. I love a good arena or stadium show, but give me a small venue anyday. Now, I’m not an expert on acoustics, but I have always loved the sound inside The Saltair. And tonight was no exception. Sara’s beautiful voice soared fantastically through those old wooden beams. Her band was mixed perfectly, and they were exceptional in every way.

Sara came out and the crowd was deafening. She opened with “Little Black Dress”, a song from her latest album and the name of this tour. She kept the energy rolling with songs like “I Wanna Be Like Me” and “Love Song”. She was also so great with audience interaction. She complimented the audience about their energy, saying she didn’t need to do anything, we were all ready to go. She made a joke that maybe it was the smell that was firing up the crowd. For those who have never been to The Great Saltair, it is right on the shore of the Great Salt Lake. And the sweet sulfury smell of the lake is as much a part of the show as the bass player. I like to use this amazing odor to gauge how the show is going. If it’s not a very good concert, that smell gets worse. And if the show is great, the smell becomes almost unnoticeable. Well about a third into the show, you could have sprayed perfume on me, or lake water, and I wouldn’t have even noticed. Sara was just that good.

She treated a good part of the show as if it was a VH-1 “Storytellers” episode. Telling us of her recent move from Los Angeles to New York, the heartache of ending a long term relationship, and how these songs were written in regards to those events, and at what time. I don’t think I have ever seen someone work an audience quite like Sara Bareilles. Her banter is as quick as a stand up comic being heckled. She really is hilarious. I was laughing really hard at times. She also has a way of putting you right there in that moment with her when she wrote that song. It takes a lot to visualize a song; To picture everything happening as if you were there. But she makes it so easy. There was a great part of the show where Sara performed alone with either her piano, or a guitar. I felt like I was in a living room with a few friends watching her perform for just us. It wasn’t until the song ended and the crowd was much louder than just a few friends, that I was brought back to where we were.

Sara debuted a new song that she has written for a Broadway Musical named “She Used to be Mine”. She is doing the music for a stage adaptation of the film “Waitress” starring Kerri Russel of “Felicity” fame. If the rest of the songs in this musical are anywhere near as good as this song, this musical will be a hit. Once again, we were taken from the concert stage, to the Broadway stage in our minds, and could visualize the staging of this show, just from how good this song was. I can’t wait to hear the rest.

Now as much as I love Sara’s cover of Coldplay’s “Yellow”, I was even more impressed with her cover of Sia’s “Chandelier”. I mean, wow! Her range is incredible. The girl performed just the night before in Denver. How is she hitting these notes on back to back nights? I was seriously blown away. The audience was excited to hear the cover, and then when she killed it, they were anxious to give Sara her due applause. People next to me were commenting on how amazed they were. One nice girl next to me said, “I never thought I could love a version more than the original. But I love this so much, I think I’ve changed my mind!”.

Sara concluded her main set with a string of her biggest hits. A song that is sure to be heard at wedding for years to come “I Choose You”. I try to never video songs while I’m at shows because I like to be in the moment. I might film a minute here and there, but I’d rather be in the present then watch it later on youtube. But for my faithful readers, I decided I would record this whole song, so that anyone who hasn’t seen Sara Bareilles live, would get an idea just how amazing she is. She followed this with a crowd favorite “King Of Anything”. I really like this song, but for a minute there, I felt like I was at a man haters convention. These drunk girls were singing the lyrics in my face as if I was their horrible ex boyfriend. It was pretty funny actually. But when things settled down, everyone was united in a great sing along. Sara finished this run with her now biggest hit, “Brave”. The audience was taken to a new high, and the volume of their singing almost eclipsed Sara’s voice at times. She finally just gave the crowd their moment to sing the chorus, and sing they did. PS-It’s really hard to sing at a concert where there are mostly women. I tried singing along, and I felt like my voice could be heard for at least 4 rows. So I let the ladies have their time and kept my singing to myself.

Sara came back with the three women in her band and did a four part harmony a capella version of “Bright Lights and Cityscapes”. To be able to quiet down a crowd of 2,000 people to sing a song a capella is not small task. But we shouldn’t be surprised to know that she did it. Sara did it. It was silent in there. The harmony’s were perfect, the song was beautiful, and it was a perfect moment for the once frenzied audience. She closed the show with “Satellite Call”, and then that was it. She was off. Ready to hit the road to entertain and inspire another anxiously awaiting audience.

I had seen Sara in concert once before this. But she was opening for another band. She sounded great, the crowd enjoyed her, but there is something to be said for when the show is your own. The setlist was as long as she wanted it to be. The lights were her lights. The staging was hers. It was her show, and she completely owned it. I love seeing artists in the prime of their career. The fans are still excited about “new stuff”. The music is fresh, and packs an impactful punch rather than reflections of nostalgia. This was Sara Bareilles live in the most perfect way.

Fan or not, man or woman, I cannot recommend seeing Sara in concert more. You won’t go home disappointed. It’s impossible. You’ll be impressed by her voice, you’ll convert to a fan of her seemingly “for women only” songs, and you’ll be guaranteed a hard laugh. What more do you need in a night?