Sam Smith made his Utah debut Friday evening October 2 at the Maverik Center. It’s amazing how famous he has become in a relatively short time. The Maverik Center holds about 10,000 people, and generally a band, or a singer with still just their first album won’t play a venue this large. Well, Sam not only played this venue, he sold it out.

To be completely honest, I wouldn’t consider myself a huge Sam Smith fan. (I only say this, so you know where my point of view is coming from in this review.) Don’t get me wrong, I like him, I respect him, and I am impressed by his voice, and his rapid rise to stardom. So I’m not hating on the guy. There are just some artists we’ll all be drawn to more than others. I however, do like attending concerts of artists I’m not super enamored with. It gives me an opportunity to notice all the things going on that I might not see when I’m there as a huge fan. 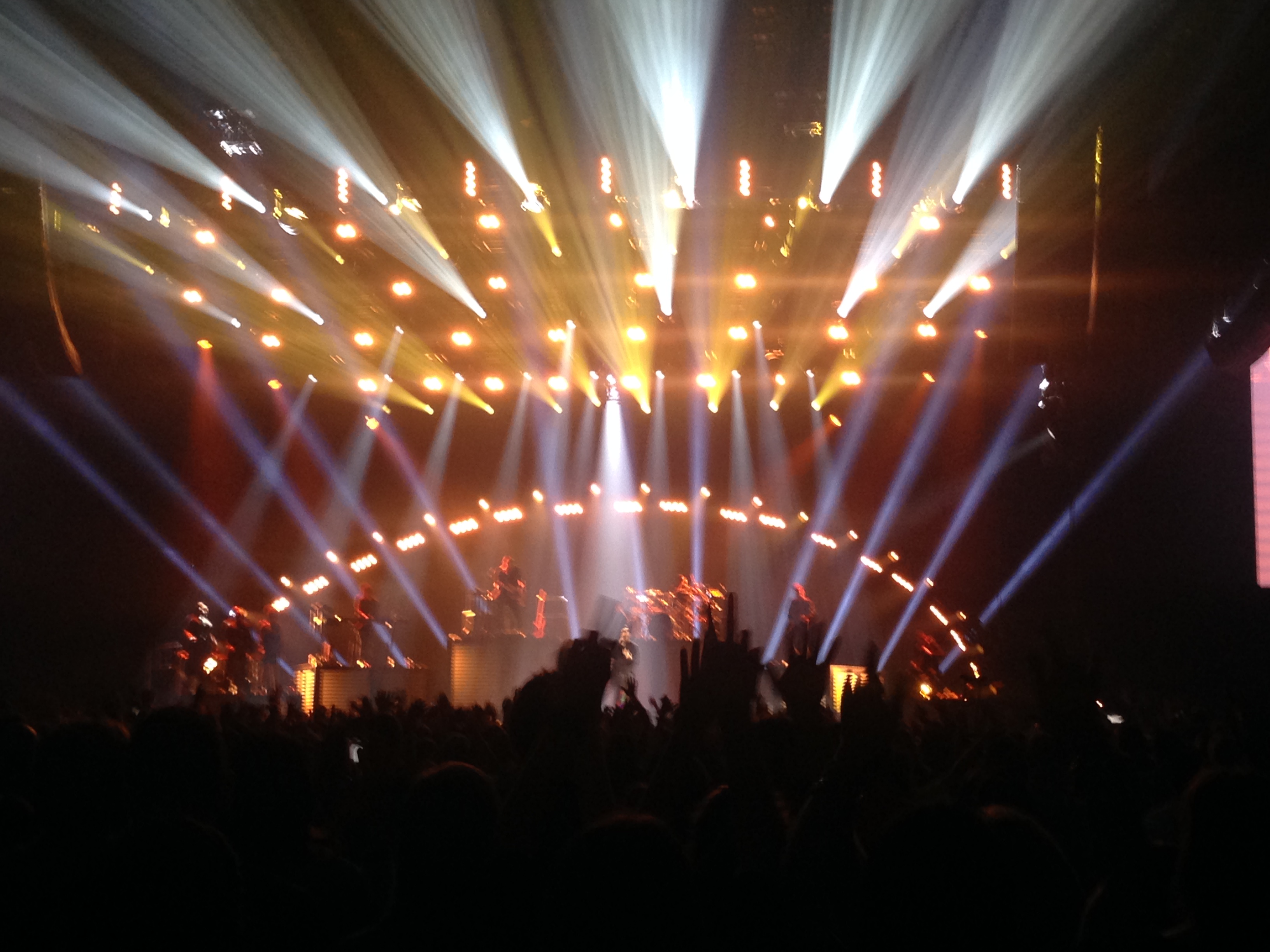 The first and most obvious thing was the crowd was about 95% female. Which I was surprised by. I guess I didn’t realize that was his main demographic. Maybe it is like that only in Utah, I have no idea. But it seemed the age ranged from 15-23 year old young women. So I was a little bit out of my element. Or a lot out of my element. As I mentioned, the Maverik Center was full. The front of the floor was general admission, which I thought was odd because it’s not like Sam Smith has big dance songs. But it was packed all the same. Then the second half of the floor were seats. I was fortunate enough to be on the front row of the seated area of the floor. It’s funny, of all the shows I’ve seen lately, the best seats I get are for the artist I’m least excited to see. I was just to the right of the soundboard, so while we were waiting for Sam to come on, I was entertained by the sound engineers and their prep work to begin the show.

When the show began, the band and Sam were behind two curtains. They dropped the first one, and then a thinly veiled second curtain was revealed. All that was heard about the ear bleeding shrieks of the girls in attendance was Sam Smith’s opening notes. Then the spotlights centered on the main event and Sam Smith appeared. I didn’t think I’d need ear plugs for a show like this, but with that type of audience I immediately regretted my decision. 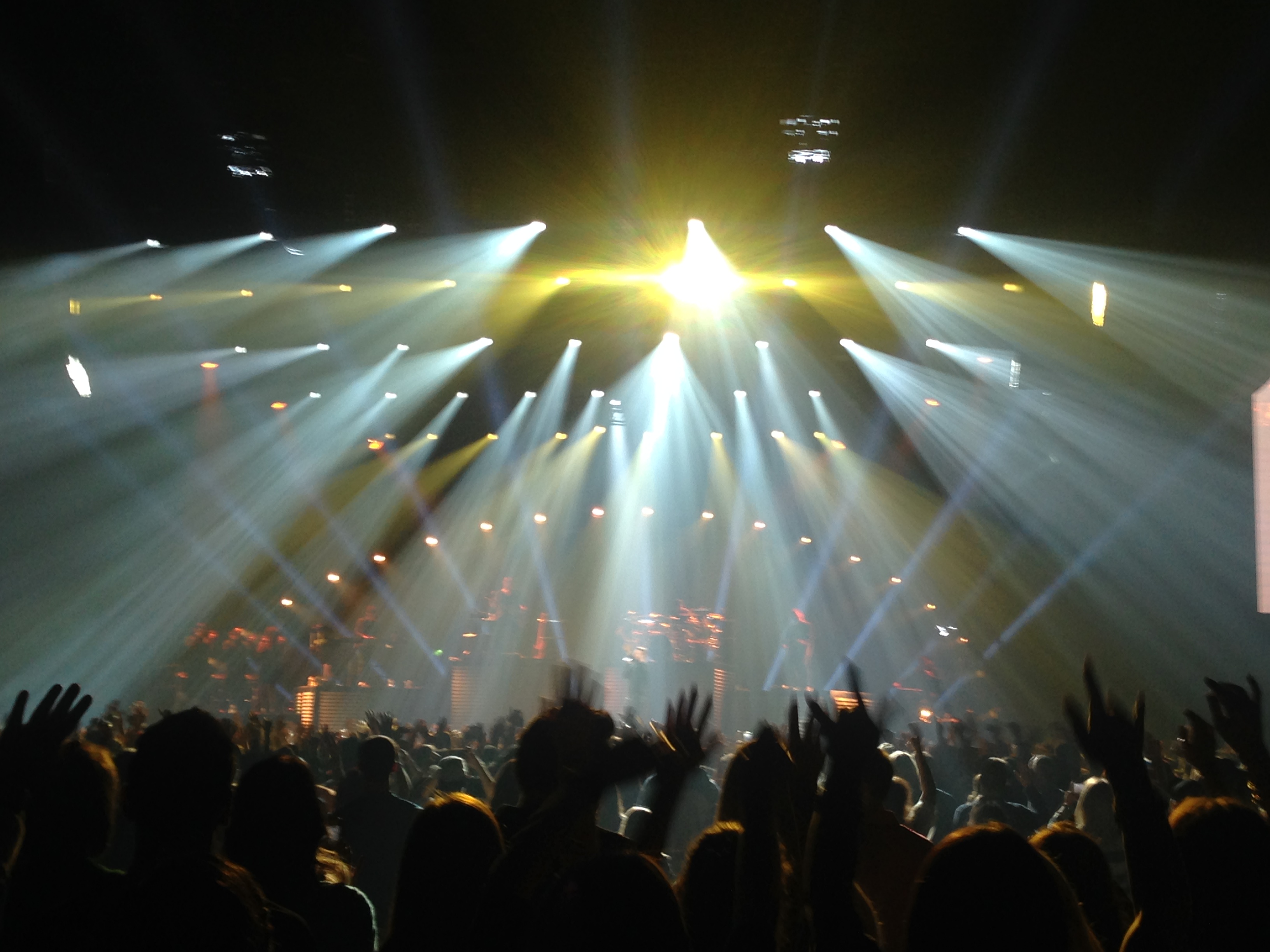 Sam played for about 80 minutes, singing what I can assume was his entire album, plus a cover of the old standard “My Funny Valentine”. What Sam lacked in stage presence, he made up for with talent and sincerity. When you think about it, it has to be so strange for an artist from England to come to a random place in the middle of America like Salt Lake City and find a sizeable audience waiting for him there. Sam seemed to be genuinely amazed by this. He was very appreciative of their devotion to him, and encouraged them often to sing along with him. And they did.

Another thing I noticed, and boyfriends pay attention. It seemed that the men who were there, were either dragged there by their girlfriends, or they were taking their girlfriend on a date to see their girls favorite artist. Now Sam can sing a ballad or two, and during those slow jams, there was some interaction between these couples throughout the arena that told me, these boyfriends would be thanked later for bringing them to the show. Thanked is the right word, right? Anyway, point is, fellas, just because an artist might not be your favorite, taking your significant other to one of their favorites is a really good move. Especially when the slow jams jam like Sam jams the slow jams.

My major takeaways with the show is Sam Smith is still at the beginning of his career. He kind of rocks back and forth when at the mic stand, and when he takes the mic off of the stand he just walks from one side of the stage to the other. A couple times he brought his backup singers (Who were amazing by the way) down to help him fill out the stage. He still doesn’t seem 100% natural or comfortable on stage. His voice, and the things he says to the audience are so sincere that I have no doubt with a little more seasoning, his stage presence will catch up in no time.

But more than anything, nothing stands out more than his voice. What a rare and amazing gift he has. He hit some serious high notes, and he made it seem effortless. On the way home I tried to hit some of them, and the only way I could was by pushing as hard as I could, and as loud as I could. Fortunately, I was in the car alone. He has a rare talent, and it is clear that he takes good care of it. Every note was perfect, and so clear. When he closed with his hit “Stay With Me”, I felt like I was listening to the album. It was that perfect.

So, while I may not be the president of the Utah chapter of the Sam Smith fan club, I will never deny his talent. I am interested to see what he does next. Well done Sam.