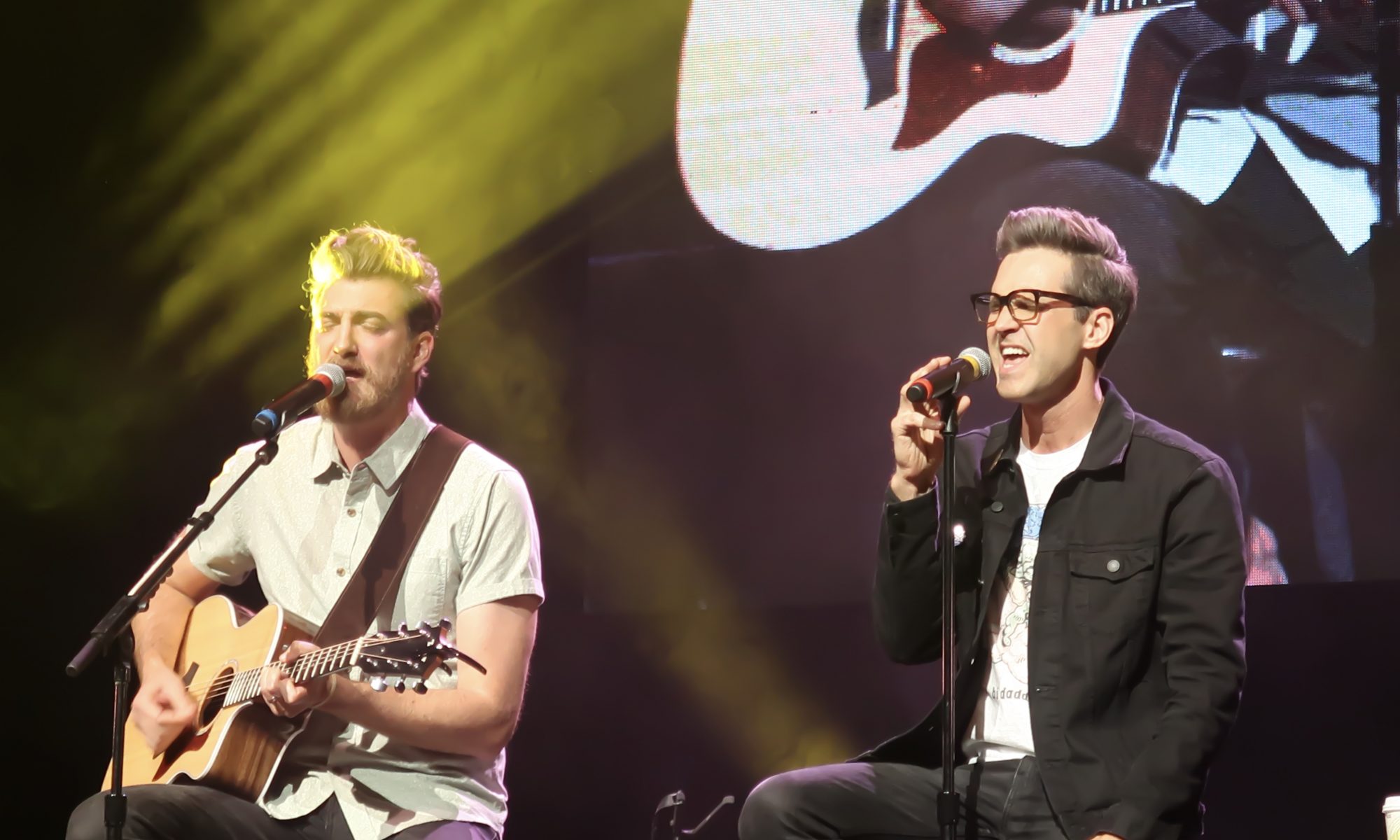 Singing, comedy, and vanilla-wafer top hats, what more could you possibly want? That’s what Rhett and Link brought to the stage at The Maverik Center this last Saturday. The best friend, comedy duo hit the road for their first live concert tour, Salt Lake City, being only their second stop. If you don’t know who Rhett and Link are, or what Good Mythical Morning is then you are missing out on some top notch YouTube content. Rhett and Link are the stars of their YouTube show, Good Mythical Morning (GMM), with over 15 million subscribers who watch their videos religiously, as they upload nearly everyday. I love watching GMM! You never know what these two goofballs are going to do. From watching them eat strange and sometimes questionable food to watching them test women’s clothes, or make a human pizza, their videos are bound to make you laugh! I was super excited to see them live again! I traveled to Seattle in 2017 for their book tour. This time though, they were live in concert! They hadn’t been to Salt Lake in a few years, so fans, old and new, were super eager to see their favorites in person and not just on a small screen.

When the lights went out everyone screamed in excitement. For most people, this would be their first time seeing Rhett and Link in person, since it’s only their second tour ever. And once they appeared on stage, the screaming didn’t stop, instead, it got louder. It’s a surreal feeling to watch someone online, through a screen, everyday for years, and then to see them in the flesh, right in front of you! It’s pretty awesome. “If you don’t know who we are, you were probably dragged here by a mythical beast,” Rhett said.

They started off with “The First Comment Song”, a hilarious tune about the ridiculous comments we all see on videos or photos posted by an account with a large following. Rhett and Link are natural comedians, their satirical songs made everyone laugh and right from the beginning the audience was enjoying themselves. The awesome thing about these two is that people of all ages can enjoy them and their humor. “Rhett & Link’s tour gathered a unique crowd in SLC. Their on-stage banter continues to be a crowd favorite, whether you’re watching GMM, or joining their show live and in person,” said Emily Robinson, 32, “I didn’t know what to expect at the show, or that they had such stellar singing talent, but I had a great time!”

They played a mixture of new songs they had written for this tour and a lot of fan favorites. They even busted out the iconic vanilla wafer top hats, as they performed “Nilla Wafer Top Hat Time”. A wafer fell off from Link’s hat and he tossed it to a fan for them to eat, if they dared. Rhett and Link play off of each other very well. They’ve been best friends since the 1st grade and make you feel like you are best friends with them. The whole arena connected over laughter because of these two. Some people around me were laughing so hard they couldn’t breathe! Others were crying from laughing too hard. I definitely was one of those people.

The combination of comedy and song was just too perfect. They were able to add skits with their songs, making them even more enjoyable. They performed “The Dog Park Song” and the crowd got to choose who would play the dog. Link was in favor, so while Rhett sang, Link ran around the stage acting like a dog, panting and barking and even met a lady dog friend backstage. It was awesome how interactive they were with the crowd. People from the bleachers would scream “I love you!” and other compliments and they would answer back.

There were multiple wardrobe changes as well, which was a nice mix up. The outfit changes fit the songs they were going to perform, like “The New Shirt Song,” were they came out wearing matching shirts, singing about how only one could wear it! Rhett continuously played the keyboard as Link attempted to rip his matching shirt off of him. It was so funny! My favorite outfit change had to be their rapper outfits or as Link said, “what we think rappers wear.” This was my favorite part of the whole show. On the giant screen on stage, their famous music videos would play as they performed each song live. It was so crazy to see them in the videos, compared to now because some of the videos are nearly 10 years old! They each have millions of views on YouTube. Makayla Hamblin, 17, said, “it made me so happy finally seeing them live. I’ve been a fan since 2012. It’s a dream come true. I loved when they sang some of the songs they released on youtube!”

I think the Maverik arena was a perfect venue choice. It was large enough to hold all the mythical beasts who came out to the show but still felt personal and intimate. The large screens behind the stage gave everyone a good view and the acoustics weren’t bad at all. Overall, it seemed like everyone enjoyed the show. The laughter was contagious, even to Rhett and Link. When they came out for their encore, they were surprised with how loud everyone was cheering and how everyone had pulled out their phone flashlights as well. It was a pretty sight and you could tell they were surprised.

I fully believe Rhett and Link could sing about almost anything, no matter how ridiculous and they would find a way to make it funny. Rhett’s peaceful guitar playing and Link’s lovely harmonica will definitely be in my mind for a while, and so will watching two men in their 40’s rap intensely in matching, red, jumper suits! Only Rhett and Link can pull that off.