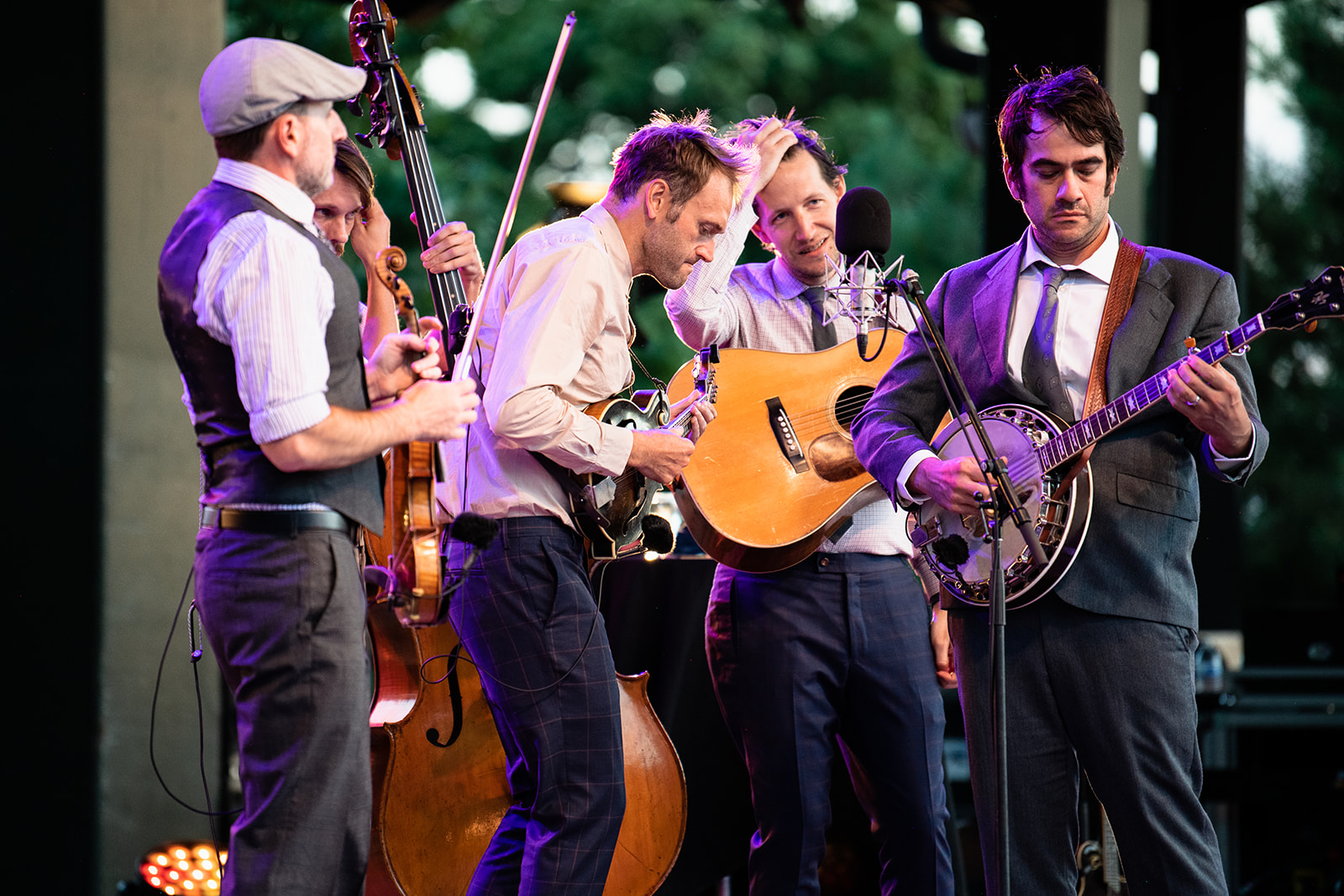 After the success of their 2017 American acoustic tour, Punch Brothers decided it was finally time to revive the tour and hit the road. The 2022 version of American Acoustic would include some new and familiar faces. This time around Punch Brothers would be joined by Watchhouse and Sarah Jarosz. The second night of American Acoustic would bring the musicians to Salt Lake City’s Red Butte Garden for an unforgettable show. I had never been to a concert at Red Butte before but had always heard such wonderful things. I was excited to finally have the opportunity to experience it for myself. The perfectly manicured venue was absolutely beautiful. With the flowerbeds in front of the stage and large trees as a backdrop, it was the perfect place to enjoy live music.

I’ve been a long-time fan of folk and bluegrass music, so I was looking forward to what I knew would be an enjoyable night. I was familiar with the Punch Brothers, but the other musicians were new to me. The events of the night played out a little differently than most shows I have attended. This very unique concert turned out to be more of an evening of collaborations instead of 3 individual sets. After a musician left the stage it wouldn’t be long before they returned to play more music with their friends.

The concert started with The Punch Brothers, Watchhouse, and Sarah Jarosz all taking the stage to sing the traditional bluegrass song “Little Birdie” together. The collaboration between the groups on the classic song set the tone for how the rest of the night would unfold. I enjoyed seeing them all on stage at the very beginning to begin the night. It was a change from the traditional concert format, but it sent a message that they were all performing a cohesive show together.

The Punch Brothers and Watchhouse stepped off stage, leaving all eyes on Sarah Jarosz. The four-time Grammy Award winner captivated the crowd with her incredible voice as she sang. She started with a couple of her originals, “Blue Heron” and “Build Me Up From Bones,” proving that her songwriting was just as impressive as her singing. Jarosz then sang a powerful cover of U2’s “I Still Haven’t Found What I’m Looking For.” The crowd couldn’t help but join in and sang along with every verse. She welcomed and encouraged their participation during her performance.

After her first few songs, Punch Brothers mandolin player Chris Thile joined her back on stage. Another concertgoer sitting near me mentioned that Sarah and Chris have been performing together, specifically at the Telluride Bluegrass Festival, since they were young. She said that many of the musicians there that night had been long-time friends. After hearing about their friendship and history, the consistent collaboration between all the musicians throughout the night made more sense to me.

After playing another original song, the duo was then joined by Nathaniel Smith. With Sarah on the mandolin, Chris on guitar, and Nathaniel on the Cello the now trio played a really fun cover of “Drive My Car” by the Beatles. Just as Chris and Nathaniel left the stage, Watchhouse stepped out to join in on her last song, “Little Satchel.” I was completely blown away by the talented Sarah Jarosz, and as she walked off I found myself hoping I would get to hear more from her before the night ended.

After joining Sarah Jarosz on her last song, Watchhouse stayed on the stage to perform their set. My new friend who filled me in on the history between Sarah and Chris was now able to tell me about the current musicians on stage. Watchhouse was the new band name for the husband and wife duo, Emily Frantz and Andrew Marlin. Until recently the duo was known as Mandolin Orange. I was told that their recent self-titled album was hauntingly beautiful, and as I listened to them play I had to agree.

Andrew took a moment to address the crowd and said, “It’s really nice to be back here at Red Butte Gardens, I love this spot so much. But also, it would be really nice just to be in the audience and listen to all these fine folks. It’s all my favorite musicians.” Andrew played mandolin and took the lead in singing their first song “Echo,” while Emily played guitar and sang back up. They sounded amazing, and they seemed to be very comfortable playing together. They were soon joined on stage by a few more musicians to accompany them. I recognized one of them was Nathaniel Smith, who had just been up with Sarah Jarosz.

Watchhouse played some of their older songs, “Old Ties and Companions” and “Hey Stranger” from their Mandolin Orange days. They also played a few new songs from their most recent album, including, “Nightbird,” and “New Star.” I found their performance to be quite peaceful and poetic. During their last song, “Golden Embers,” The Punch Brothers walked out to join in.

Punch Brothers consists of Chris Thile (mandolin), Gabe Witcher (fiddle/violin), Noam Pikelny (banjo), Chris Eldridge (guitar), and Paul Kowert (bass). They have a decent following, and grew in popularity after they were the focus of the documentary “How to Grow a Band.” At most concerts, there is a very different level of anticipation as a crowd waits to hear the headliners. With this one, there was no waiting for 30 minutes between bands. The Punch Brothers were of course already on stage as Watchhouse exited. The audience had also already seen them perform at the very beginning of the night as well. The anticipation may not have been the same, but the excitement was just as high as the band began.

Fans made their way closer to the front as they started playing one of my favorite songs of theirs, “My Oh My.” They followed their first song with an all-instrumental song “Watch ‘At Breakdown.” Throughout their set, I watched as people sang and danced along. The crowd especially loved singing along with one of their most popular songs “Julep.” The band told the crowd that “Julep” was not the only song of theirs named after a drink. Two of their instrumental songs “Three Dots and a Dash” and “Jungle Bird” are both named after tropical drinks. Before playing “Jungle Bird,” Chris Thile said about the drink, “If you haven’t had one, it tastes exactly like this instrumental sounds.” After all the fun songs about drinks, I started to think that the Punch Brothers could just as easily go by the Spiked Punch Brothers.

They are a very talented group of guys, and their music is often described as progressive bluegrass. I would say they are also one of those bands that are just as good, if not better; when performing live. The band played “Pride of a Man,” before the collaborations started up again.

The musicians all seemed to play musical chairs during the next few songs, as the artists all took turns performing with Punch Brothers. Before long they were all back up on stage together. The remainder of the night would be a performance that included each one of them. I enjoyed watching them all interact together as they played. It was easy to see they enjoyed touring together. This part of the night felt like I was just watching a big group of friends having a great time making music It felt very fitting and authentic for these folk bands. At the end of the night, the musicians all gathered together to take a bow and thank everyone for coming.

As I was leaving the venue I had the chance to talk to a few people about how much fun the night was. Someone mentioned to me that they wished every concert would feel exactly like this one.