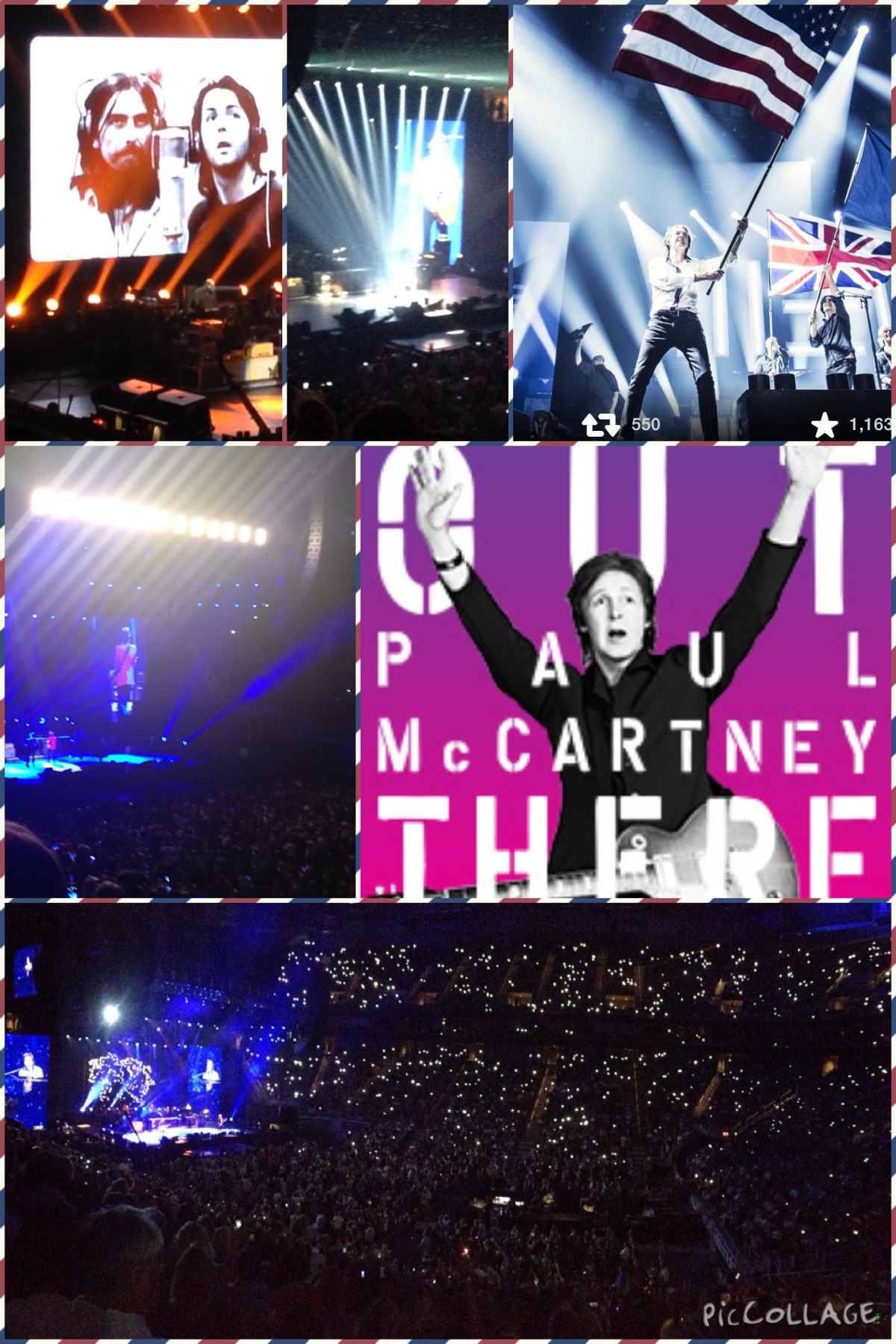 How many of you can remember when you heard The Beatles for the first time? My guess if you’re under the age of 50, you don’t recall that moment of in your life. They have just been a part of your life from the beginning. I imagine as it is with me, you’ve heard, loved, and appreciated not only the greatest of The Beatles but also enjoyed Wings and Sir Paul solo hits. Now imagine this lifelong soundtrack wrapped up in one 39 song, 3 hour concert. That is what those of us who were fortunate enough to attend Paul McCartney’s recent concert at Energy Solutions Arena were blessed with. He covered it all.

The lights dimmed and The Paul McCartney walked on stage right at 8:30 PM. The crowd rose to their feet and the arena was as loud as I’ve ever heard it. Sir Paul didn’t say anything, he just waved, strapped on his iconic violin bass guitar, and opened the show with Beatles favorite “Eight Days a Week”. I didn’t think the crowd could be any louder, but when that song started the crowd volume rose even higher.

On a personal note, I’ve been trying to see Sir Paul since I was a senior in high school. Now we don’t need to get into how old I am, but let’s just say, if someone was born the day I first started trying to see this man in concert, they could have easily bought a beer at last nights show. It’s been a long time coming. So when Sir Paul walked out, and I was seeing him with my own eyes, and hearing one of my favorite songs live, I will admit, my emotions got the better of me. Music means so much to me, and this man’s music has not only influenced me, but influenced so many other bands and artists that I love. To have now have him directly in front of me was almost too much to take, and almost impossible to believe. I think I still have pinch marks on my arm from the continual reminders that this night was real. I’m sure for many reading this, that’s a little much. But for those who share my feelings, I know you get it.

Paul McCartney mixed his set list with an artistry that I think other bands should take a look at and apply to their setlist decision process. Paul has a new album out. It’s pretty good. But I don’t imagine people went to this show to hear the new album (conveniently named NEW). He was able to sneak in 4 songs from his current album, because he sandwiched them between Beatles songs, or a Beatles songs and a Wings song. But we were never left sitting there dying to get to the next big song from the catalogue we came to hear. He got to it. Did he ever. The thing about The Beatles, is just with Sir Paul’s songs alone, we could have been there for two more hours. But the cool part about that is he would do songs that we may have not expected. Songs like, “I’ve Just Seen a Face”, “Lovely Rita”, or “ Ob-La-Di, Ob-La-Da “, or Wings hits like “Hi-Hi-Hi” and “Let Me Roll It”. All of them came as a pleasant surprise to the crowd. Almost like an “Oh yeah, I love this song!”. I don’t know how he decides on his set list. There are so many great songs to choose from. Normally a band has at least ten songs they have to play, and then they play maybe five or six off the new album, then maybe five others of their choosing. Sir Paul has so many songs he can’t do that. It’s no wonder his shows go almost 40 songs deep.

While I would say the majority of the audience were Beatles fans from the beginning, there was a good mix of young and not so young. I’m not a fan of sitting down at concerts, but the show was so good, I couldn’t let it bother me that we sat for a good portion for the show. But again, the show was 3 hours long. Most of these people haven’t stood for three hours straight in at least 25 years. But when the time was right, we were all on our feet dancing to this amazing music.
I had the benefit of sitting behind a man who undoubtedly watched the four lads from Liverpool appear on the “Ed Sullivan Show” for the first time, and in front of two teenage guys who most likely have no idea who Ed Sullivan is. I could see the man in front of me sing every word to every classic song as if he was back in his teen days himself. I was ultimately impressed with the teens behind me. They were singing right along to every song Sir Paul performed. Even songs from the new album. Impressive! One, that they were such huge Paul fans at such a young age, and two, that I could actually hear their voices over the beautifully loud, and perfectly mixed music. When I realized I could hear them, I quickly apologized to the dude sitting in front of me if my voice is ruining all of the videos he had taken with his camera phone. But to be honest, I didn’t care. I can’t remember the last time I sang out so freely and danced as if no one was looking. For those listening or looking, you’re welcome. Also, don’t steal my sweet moves.

I feel like the four luckiest people in the world, are the men who compile Sir Paul’s touring band. Yes, they are extremely talented, and add a nice freshness to these songs. Buuuuuut, they are touring with Paul McCartney! There are a lot of really talented musicians out there. They must love their jobs. And to their credit, they really are great. I’m sure there is a reason Paul has picked them, and played with them longer than any other touring band he’s had in the past.

Paul did a solid job of giving tribute to his fallen bandmates, John Lennon and George Harrison. He sang the songs “Here Today” , which is a song he wrote after John was killed. The song is in the form of a conversation that he wished he would have had with John before he died. If you haven’t heard it, go right now and listen. I’ll wait… Ok, pretty great right? Such a beautiful tribute. I can picture that conversation just by listening to that song. He gave tribute to George, by sharing with us that George was a really good ukulele player. And he began one of George’s biggest hits “Something” with just him and a ukulele. The band joined in to finish the song, and I’m sure George would have been proud of this version. It was a special moment in the show for sure. He paid two more tributes playing “My Valentine”, a new single off the latest album to his current wife Nancy Shevell, who was in attendance. Then he played “Maybe I’m Amazed” to his late wife Linda. It was as if he was letting us into his personal life, if only just a little bit.

Sir Paul has been performing for over 50 years. For some, this makes them less enjoyable to watch. Either there voice is shot at this point, or they are just going through the motions for a payday. But while Paul’s voice at times shows the wear of touring, he has complete control of his it, and it sounds at least 20 years younger than his age of 72. And going through the motions he is not. At least not in a way that we can tell. He’s still having fun. He made jokes to the crowd, told stories of Jimi Hendrix and Eric Clapton, and even tried to read some of the signs people had brought. He told us “I think we’re going to have a party tonight!”. I’m sure he says that wherever he goes. But it was true. Party we did. He said at the end “You see, I told you we’d have a party.” Again, he probably says that a lot. But he doesn’t do the typical throw in the name of the city in between every song for a cheap applause. He probably mentioned Salt Lake City or Utah three or four times at most. Paul McCartney does not need cheap applause.

Now I’ve seen a lot of Paul McCartney concert footage over the years. He mixes it up, yes, but there are a few highlights that I was eagerly anticipating. But when they happened in this show, they snuck up on me. The pinnacle of course being “Hey, Jude”. You guys, I have been dying to sing “Na Na Na Nana Na Na Hey, Jude!” for so long that when it came, it was almost like an out of body experience. The only reason I knew it was actually happening was how thrashed my throat felt when the song was over. The song went almost ten minutes, and the crowd never died down. It was amazing. Amazing isn’t even the right word. I don’t know if the right word exists. But, just, wow.

Paul finished the show with two strong encores, and if we thought he’d come back again, I know the crowd would have asked him back. I think the building could have been powered by the energy of that audience. We all knew we were part of a special moment in time.

This wasn’t a nostalgia show. Sure, we were taken back to whatever time it was when we first heard these songs, but it was more than that. When you go see Journey, or the “final” Motley Crue show, that’s for nostalgia. Going to see Paul McCartney is a history lesson. You go to tell people you saw the living member of the best songwriting duo in rock n roll history. You go to bridge the gap between the music your parents grew up on, and what your kids listen to now. You go to be part of a moment with 17,000 of your new friends.

I have struggled to put into words just how I felt at last nights concert. How do you describe a dream come true? How do you explain inspiration personified? He is just a man after all. But I believe he’s one of the good ones. You don’t have to love Sir Paul like I do. You don’t even have to be a Beatles fan. I think you’re nuts if you’re not, but I can accept that not everyone is going to feel the way I do. But there is no way to deny this man’s place and influence in music history.

As I returned home, I sat looking at my phone and watched the three songs I recorded. ( I hate doing it, but i just couldn’t help myself!! Damn you modern technology!) I sat reliving the moment I just experienced over and over. I slept very little because each time I’d start to doze off, I’d remember something I liked about the show and I’d get so pumped up it would be another hour before I got sleepy again. But, surprisingly I’m full of energy and basking in the glow of Beatlemania.
I think it’s pretty obvious by the perma-grin on my face that I would highly recommend this show. To anyone! It amazes me, after all the concerts I’ve been to in my life, and the amount of time I’ve waited to see this particular one, that it could still exceed my expectations the way it did. I can easily say, it was the greatest concert experience of my life. Thank you Sir Paul. Thank you so very much!