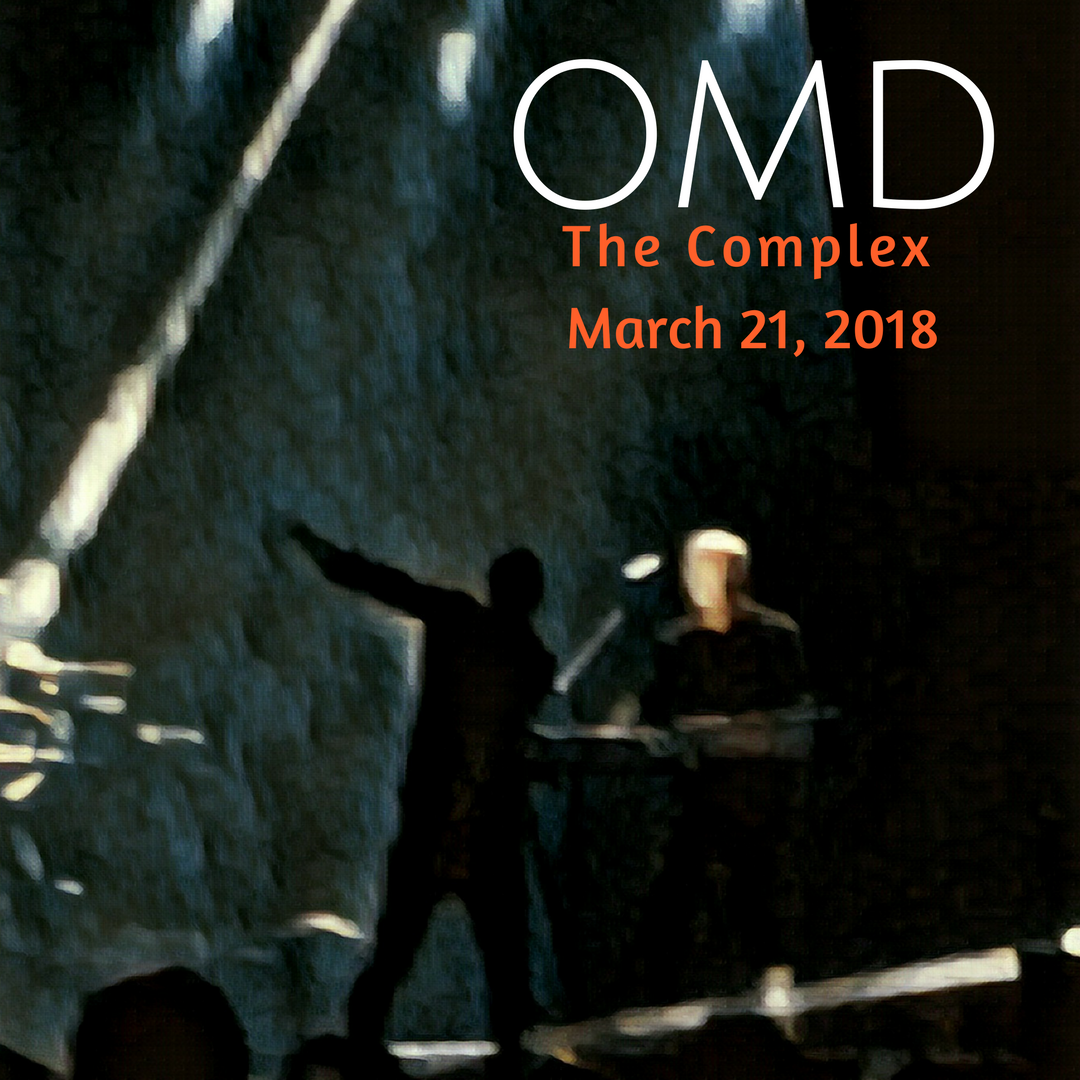 Orchestral Manoeuvres in the Dark, or OMD, is a band my oldest sister introduced me to back in the 80’s.  I knew within the first minute of their first hit “Electricity” that I was a big fan. So, of course, I was excited when I heard they were going to play The Depot on March 21.  I was even more happy for them when I learned that Utah fans were so excited about this tour stop that the show was moved around the corner to the larger venue, The Complex in order to accommodate the ticket demand.

The last time OMD played Utah was as a support act for Barenaked Ladies in the summer of 2016 at Red Butte Gardens.  They were great, but being a support act, they took the stage while the sun was still out, and it of course not everyone had arrived yet.  So I couldn’t wait to see them back in the headlining slot.

One of the best things about seeing a band that you have loved for 30 years is all the memories you’ve had with these songs. The downside tends to be having to forgive a band that’s been doing it that long for having lost a step or two.  How many times have you gone to see one of the favorite bands of your youth, and their songs seem slower, or they don’t move around the stage like they used to, or the lead singer just can’t hit the high notes like they did in days gone by. In the moment we’re usually just happy to hear the songs we love but usually, we’ll notice the decline and it becomes a quick reminder of how old we now are.  And who wants to remember that?!

Well, that’s the amazing thing about OMD. I don’t know how they’ve done it, but they’re as good live, if not better than they’ve ever been!  Frontman Andy McCluskey pushing 60 years old, was moving and dancing the whole show! He’s known for a unique style of dancing, (Back in the 80’s dance studios actually gave lessons trying to teach people this impossible to teach dancing style.) that is almost as much a part of the show as hearing “If You Leave” or “Joan of Arc”.  Both Andy and fellow songwriter and sometimes vocalist Paul Humphreys have definitely retained their voices. Andy in particular, who sings all but four songs, somehow has the ability to sing after having danced through the entire instrumental break without any signs of being out of breath. He belts out the big notes with as much vocal power and resonance as he did in his 20s or 30s.  As I listened to the commentary around me during the show, the dominant sentiment I heard was some form of, “Wow, he still sounds so good!” or “They sound exactly the same as they did back in the 80’s!”.

I felt like OMD successfully navigated their way through their setlist playing most of their biggest hits while blending songs from their new album The Punishment of Luxury.  I think the best thing a band like OMD, where their fans are mainly there to hear the hits, can do is start the show with a new song or two.  Which is exactly what OMD did. People are just so excited that a band they love has taken the stage that they’ll live off of that euphoria for a song or two before they’ll want to hear what they came for.  OMD planned this perfectly by playing “Messages” a crowd favorite, for their third song in the set followed by Tesa Girls.

Something I was happy to see was how excited the crowd was to hear a relatively new song, at least not a song that would be positioned in the nostalgic catalog of their songs, The History of Modern.  The first note of the song was heard and people went crazy. That had to feel good to a band that is still trying and succeeding to put out quality music. And I must say that I’ve been impressed with the albums they have released since their return in 2007.  But that’s an article for others to put out. This isn’t Utah Album Review after all!

OMD played hits like “So in Love”, “Locomotion”, “Sailing on the Seven Seas” and “Dreaming”.  OMD truly loves their loyal fans because they always play their biggest hit “If You Leave”, from the classic 80’s movie Pretty in Pink.  I don’t think it’s their favorite song, but they still play it every time.  And it’s obvious that the audience is thankful for it because they are singing every single word.

The highlight for me is always when they sing “Maid of Orleans”.  Not only is it possibly my favorite OMD song, but it fits all the elements of a great OMD live performance.  I love the lyrics, I love McCluskey’s vocals on this song, and there is a long instrumental piece to end the song so that we get to see Andy show off his dancing  without the interruption of having to walk back to the microphone.

While Andy McCluskey is the front man, and his energy and charisma do dominate the show in a positive way, I love it when Paul Humphreys takes the mic.  Not only are the songs he sings great, but he brings a calming change of pace to a mostly high energy show. The audience roared when he stepped to the front of the stage to sing “Forever Live and Die”.  My favorite song of his is “Secret” which was played in the encore. A song that was not initially played when they made their return in 2007. Apparently, they heard the disappointment from their fans and have played the song ever since.  Which is of course to our benefit.

Many might think of them as an 80’s band or a nostalgia act.  But they’re not. They are actually a major influence in the world of popular and electronic music.  Artists like Depeche Mode, Erasure, MGMT, No Doubt, Mark Ronson, LCD Soundsystem, Sugarland, and Howard Jones have all credited OMD as an influence on their music.

Orchestral Manoeuvres in the Dark is one of my favorite bands.  But I’ve seen a lot of my favorite bands from my youth and left feeling a little disappointed.  Sometimes they just don’t have it anymore. OMD still has it! If you ever get the chance, go see this band! 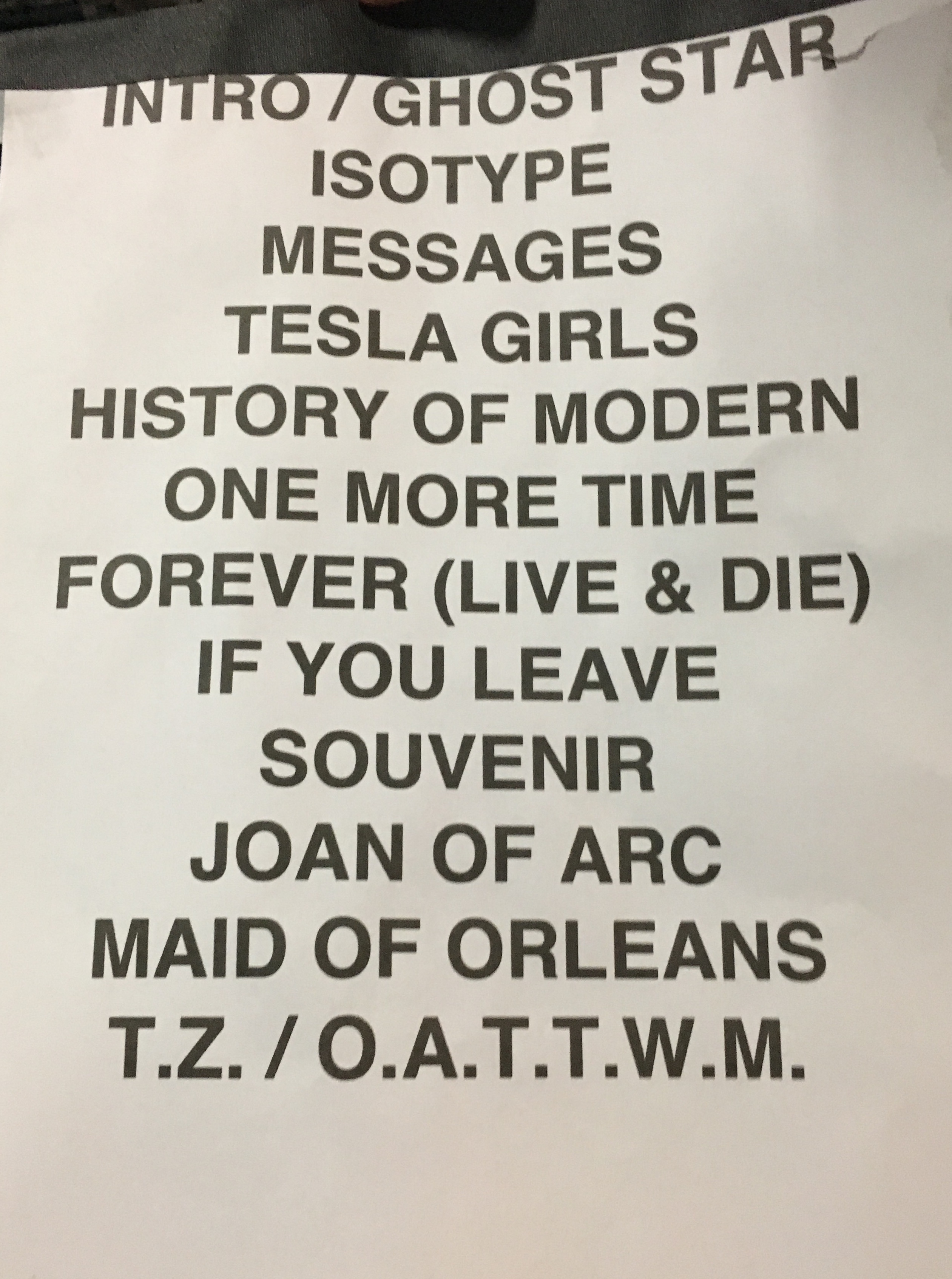