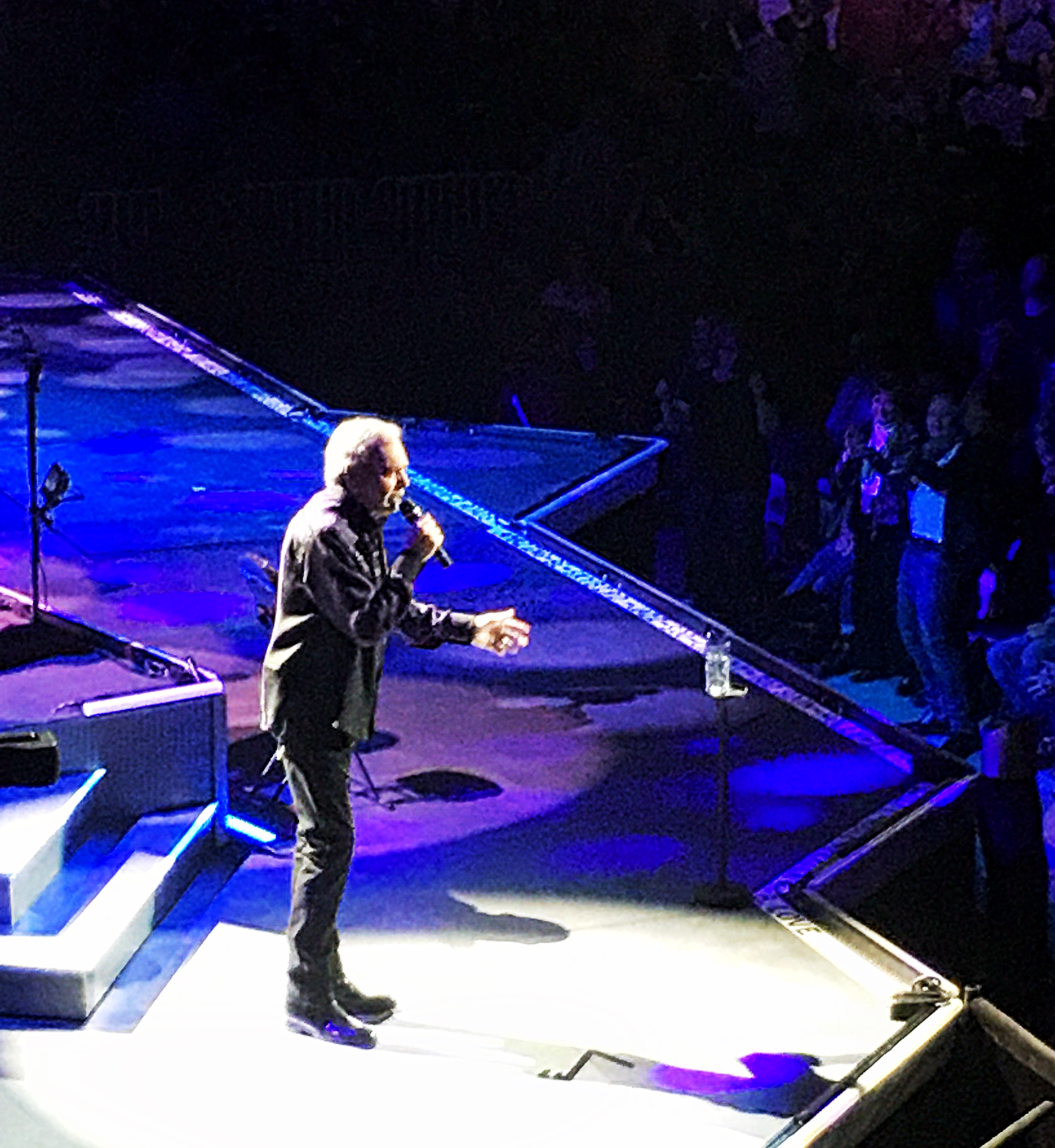 “There are two types of people in this world, those who like Neil Diamond and those who don’t.”  This statement is as true today as it was back when Bill Murray said it as he was playing Bob Wiley in the early nineties classic What About Bob?  When I told people I was going to see Neil Diamond I was given one of two responses, “Why?”, or “Why aren’t you taking me?!”.  I don’t think there is another artist I’ve seen where people have such a strong opinion.

To be clear, I’m one of those who likes Neil.  I was raised on Neil.  My mom is a big Neil Diamond fan so I’ve been listening to the guy for as long as I remember.

Neil brought his 50th Anniversary tour to a packed Vivint Smart Home Arena.  I received word that Neil doesn’t have an opener, and he usually goes on right at eight so I made sure to get there early.  I took my seats that were to the side of the stage.  These are interesting seats because they’re right by the stage, so they’re close to the action, but they put me in a position to where I could see the entire arena.

As I took my seats I saw a couple who I would guess was in their late 60’s.  I asked them if they had seen a Neil Diamond concert before.  By the look on their face, I could tell that they were lifelong fans even before they spoke.  I immediately noticed their New York accents.  They began recounting their experience with the Jewish Elvis having seen him multiple times beginning in the seventies and the last time being twenty years ago in 1997.  They were excited to see him again after such a long break.

Just as they were finished sharing their experiences, as if on cue, the volume on the background music began to rise, and the band walked to the stage.  The band began playing “In My Lifetime” while pictures began to move across the diamond-shaped video screen.  The pictures showed Neil as a child, with his family, then to adolescence, and on to each stage of his career then finally the footage cut to the exact moment when the mighty Neil Diamond rose from below the stage with his black guitar as his first hit “Cherry Cherry” started to play.  He greeted the audience with a “Hello Salt Lake City!”.  The crowd went wild.  Many sprung to their feet, many eventually made it to their feet, and some stayed put in their chairs.  This seemed to be a battle with many audience members.  Some wanted to get up and dance, and others wanted to enjoy the show from their chairs.  But what those sitting didn’t realize was that eventually,  everybody rises at a Neil Diamond concert.  But we’ll get to that later.

There are a couple of benefits in seeing someone who has been doing this for fifty years.  One is the endless amount of hit songs that are performed, and another is they know what works to put on a great concert.  Neil has so many hit songs that he can’t fit them all in one night. I don’t think it was until long after I was home that I thought, ‘Oh, he didn’t do this song or that song.’.  He did so many familiar songs that I can’t imagine anyone left feeling disappointed on the setlist.

Neil knows just how to entertain a crowd.  I saw people of all ages at this concert.  I saw entire families singing along, college-aged friends, and of course couples like the one sitting next to me.  Each one of them, child to adult, had a smile on their face, singing every single word of every song right along with Neil.  He knows how to tell a joke, share a story, and deliver a song.  It’s impressive.  Those who enjoy being entertained,  die-hard Neil Diamond fan or not, I recommend seeing this show.  It really is impressive. 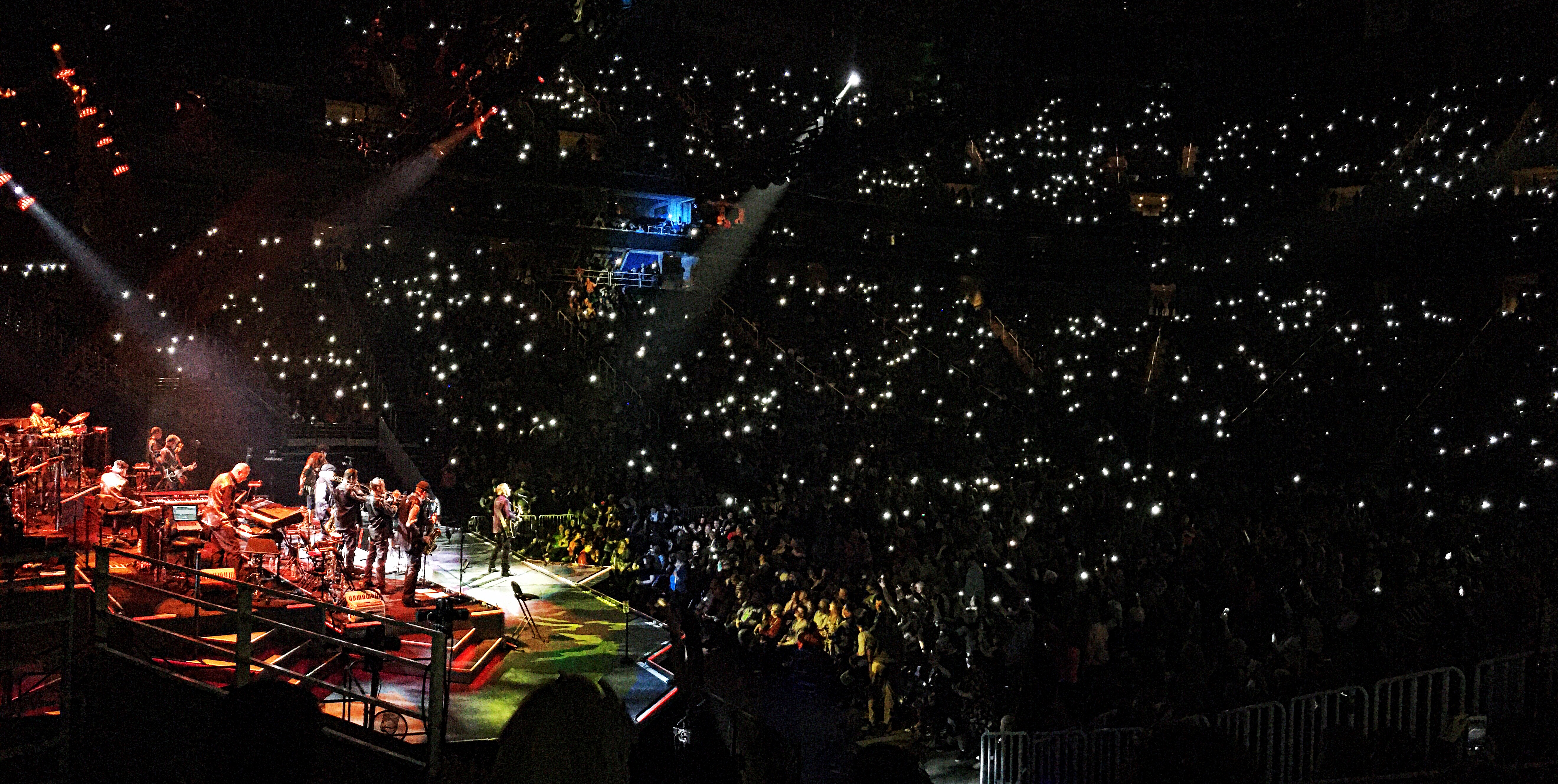 I took great interest in this New York City born and raised couple seated next to me.  I wondered what they thought about the show as compared to the Diamond concerts of the past.  As the beginning notes of a fan favorite love song “Play Me” began, I looked at the lady and saw tears streaming down her cheeks.  She just looked at me and said “Beautiful”.  She then put her head on her husband’s shoulder for the rest of the song.  I quickly realized that I was imposing on a special moment between them.  Before I could turn away to let the moment be their own, the man looked at me and said, “He’s as good as he’s ever been.”  It truly is amazing the impact a song, a show, a singer can have on people.

Neil blazed through his set singing sing-alongs like “Song Sung Blue”, “Forever in Blue Jeans”, and my personal favorite, “Holly Holy”.  He ended his main set with the poignant “I Am… I Said”.   The audience, all of them, were on their feet as Neil departed the stage.  And as he returned anyone who thought they might sit back down was sorely mistaken.  Right then organ played those all too familiar initial notes of “Sweet Caroline”.  The place went nuts and sang louder than they had all night.  The “Bum, Bum Bums” and “So Good, So Good, So Goods” could have been heard out in the street they were so loud.  And from my seat, I could see the lower and upper bowl swaying, and singing, and as silly as it sounds, the smiling.  Smiles that lit up Vivint Arena in a way I hadn’t ever seen before! And Neil really lets the crowd get their “Sweet Caroline” fix.  He finishes the song, the crowd goes nuts, and then he starts the chorus up again.  And again, and again, and again!  It really was special. 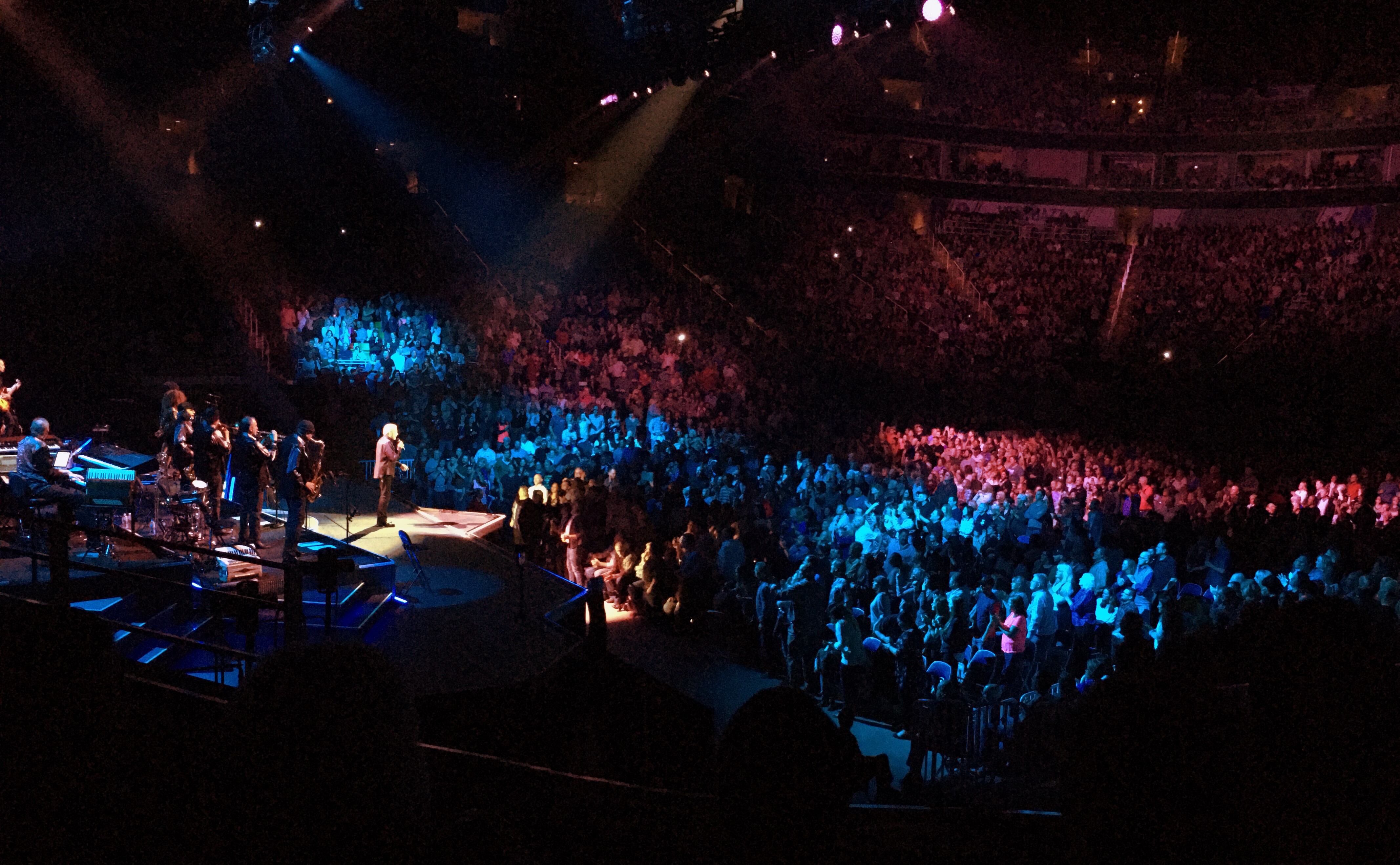 The show really could have ended right there.  But what’s a Neil Diamond concert without hearing “America”?  In my opinion, it would be incomplete. So we shouted “Today!” a bunch of times and reached, of course, his traditional closer “Brother Love’s Traveling Salvation Show”.  The arena turned into a revival tent!  People were dancing that had been sitting the whole night.  People with oxygen tanks were on their feet singing and dancing.  I wouldn’t have believed it if I hadn’t seen it.  Perhaps they were saving their legs and oxygen for this very moment.

As Neil walked off the stage waving to the crowd I wondered if I’d get to see him again.  After all, this was his 50th Anniversary Tour.  And Neil while spry as ever, is 76 years old.  Even the greats can’t do it for forever.  Unfortunately.  But is this was my last time seeing Neil, (I had seen him 4 times previous to this show starting in 2002) this was a perfect show for me to say goodbye.  I was with my brother who, like me loves Neil, and I got to sit with lifelong fans who after a twenty-year break go to see their favorite singer sing their favorite songs.  It was a beautiful evening.  Come to think of it, I guess I could have saved everybody the time reading this by simply saying “Good times never seemed so good.”  Thanks, Neil!

In My Lifetime
Cherry, Cherry
You Got to Me
September Morn
Longfellow Serenade
Love on the Rocks
Play Me
Beautiful Noise
Jungletime
If You Know What I Mean
Song Sung Blue
Forever in Blue Jeans
Solitary Man
I’m a Believer
Brooklyn Roads
Pretty Amazing Grace
Jazz Time (Band Intro)
Soolaimon
Crunchy Granola Suite
Done Too Soon
Holly Holly
I Am… I Said