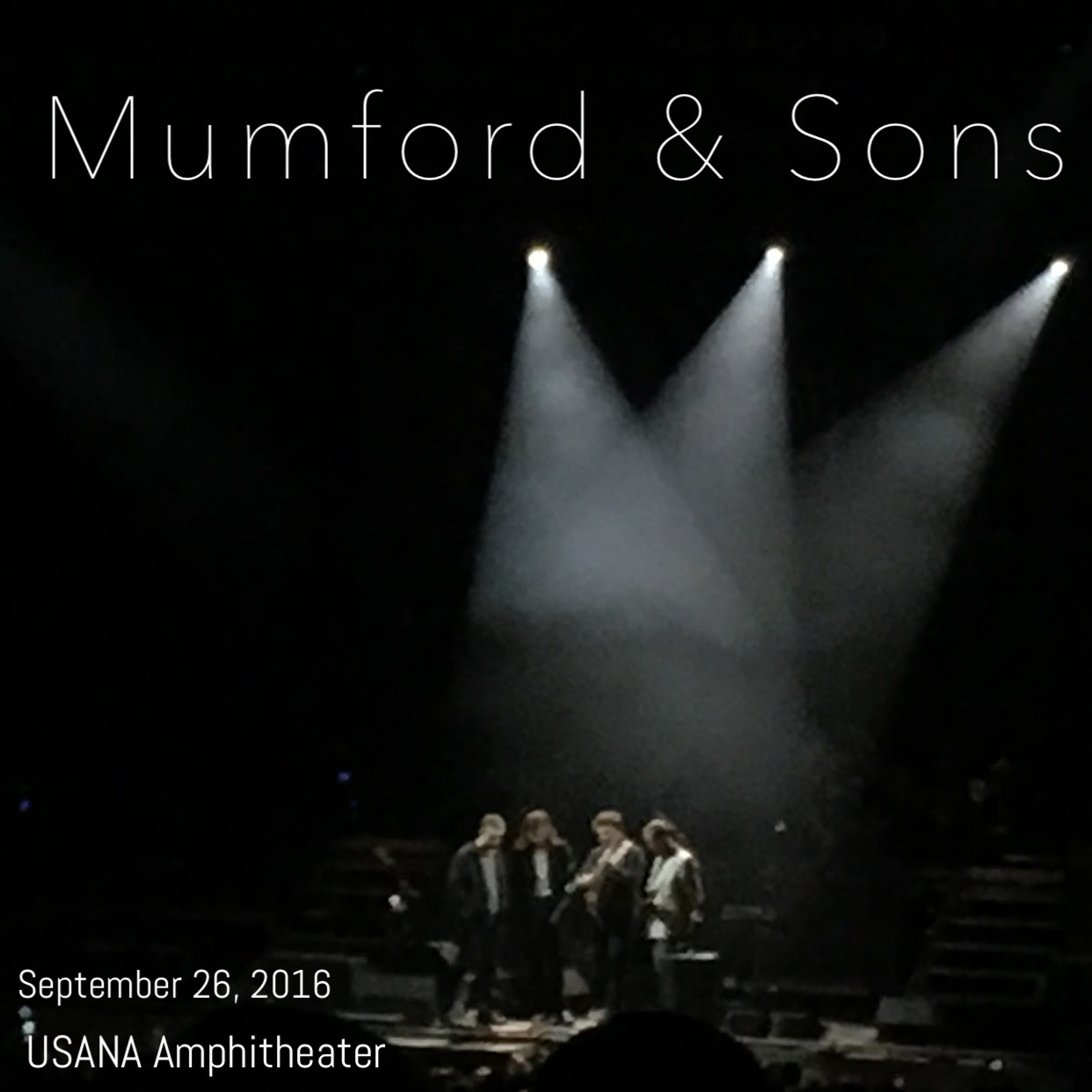 With summer coming to an end, and concerts beginning to make their way to indoor venues, I made my way out to USANA Amphitheater for what was probably my last concert there this season.  But what a way to bring this summer of great amphitheater shows to an end!  Mumford and Sons rolled into Utah for the first time in four years with their The Austin 5000 tour.

When Mumford & Sons came here back in 2012, they were white hot off of the success of their second album Babel.  They played Saltair, which when they scheduled the venue was probably the right size.  But by the time they came to Salt Lake, Saltair was much too small for them. It was impossible to get a ticket, and I missed out on what all reports indicated was an incredible show.  So I’ve been waiting to see them since then.  And it was finally happening!

With this show being on a Monday evening, and the temperatures having cooled here in Utah, the audience seemed to get off to a slow start.  Mumford & Sons opened up with Snake Eyes, from the album “Wilder Mind”.  They then followed with Little Lion Man.  I could tell the crowd was really excited to hear this hit song from the guys, but they were certainly not giving their full energy.  But as the temperature dropped, Mumford & Sons heated up.  It was almost as if they knew they needed to give us a little extra to get us going.  Please don’t misunderstand me, the crowd was most certainly into the show.  It just took them a while to physically show what they were feeling inside.

One of the very first things I noticed was how great Mumford & Sons sounded live.  Of course, I didn’t expect them to sound bad in concert, but the quality of the sound and the talent of the band was just exceptional.  Marcus Mumford’s vocals were on point.  I don’t know how he can sing that powerfully and emotionally night in and night out.  I was really impressed.

As I looked around the amphitheater, I noticed that little by little there were varying pockets of people who were already totally fired up. Others were still coming along, but I recall thinking to myself, ‘This place will be going nuts by the end of the show.’.

This show went by as if it was only twenty minutes.  They perfectly blended songs from all of their albums.  Marcus Mumford moved from acoustic guitar to playing drums, to working with crowd, expressing how much they enjoyed Utah.

My favorite segment of the night was when they played my favorite song of theirs The Cave.  At this point, Mumford & Sons had the entire audience right along with them. The energy was high and the crowd was singing every word of this song.  I thought this would be the high point of the evening.  Wow, was I wrong.  On their very next song, Ditmas, Marcus Mumford jumped down off of the stage and appeared to be engaged with those in the front row.  But he didn’t stop there.  He made his way through the audience and all the way towards my section in the back of the seated part of the amphitheater.  Just then, he took a hard left and ran into the lawn section!  I’ve seen this happen a couple times with opening acts, but never with a headliner.  There were only a couple noticeable security guards around Marcus and running into the lawn which is of course general admission, they weren’t going to be able to do much if things got crazy.  This took a lot of trust on Mumford’s part.  But having that trust in his fans gave us the highlight of the evening.  He made his way down the other side of the amphitheater, then joining the general admission in the front of the amphitheater for the remainder of the song.  When the song was over, there was an extra level of applause in appreciation for this surprise visit into the venue.  Looking around, there were huge smiles and faces expressing awe of what just happened.  When you sit in the back of a venue, no one expects that the lead singer of the headlining band is going to come dance and sing with you.  Great move Marcus.

After a couple more songs, Mumford & Sons left the stage and the crowd, of course, roared for their encore.  One thing I hate with encores is when a band comes back out and only does one song.  So you would understand my elation at Mumford & Son’s four song encore.  I heard someone ask after their first encore song, “Do you think that’s the last song?”.  It wasn’t.  Then after their second encore song I heard someone say “Just play every song you have!”.  People who started out so slow on this cool Monday night now did not want this night to end.  They finished with a bang performing I Will Wait and The Wolf.

I waited for four years to see these guys, and they did not disappoint in any way.  I really hope they come back soon because I’ll see them anytime they make a stop here in Utah.