If You’re Going to Let Go, Now’s the Time 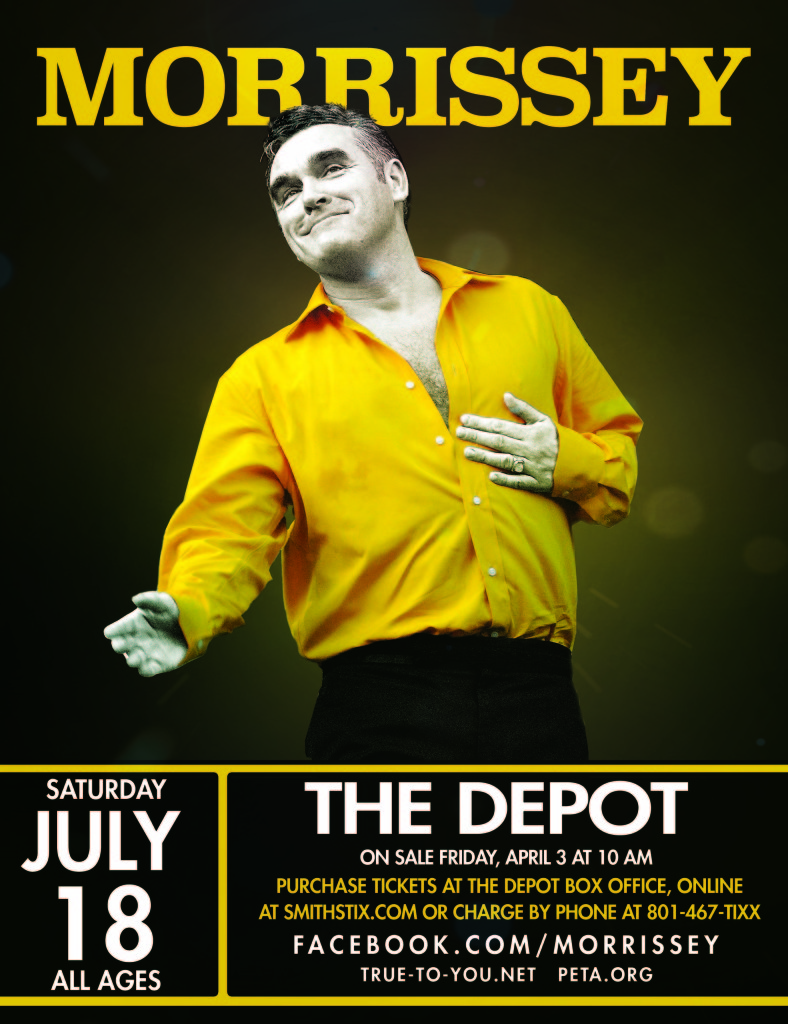 In typical Morrissey fashion, Moz did not actually appear on stage until 9 p.m., a full hour after his concert was scheduled to begin (there was no opening act). Of course there was a PETA table on the way into the venue offering sundry items (CDs, postcards, magazines, vegan cooking tips) intended to educate and persuade. A peculiar montage of black-and-white film clips, Spanish dancing, dark poetry readings, classic rock, and lesser-known comedians whiled away the time until Stephen Patrick (got you!) took the stage with a crowd-shrilling rendition of Suedehead. All delay was promptly forgiven.

We were treated to a set list (see below) punctuated by the morose banter expected and loved by Morrissey fans worldwide. Our despondent crooner addressed the crowd with, “I’m just sorry you came,” quickly followed by, “No, I’m not sorry.” After performing World Peace is None of Your Business, he informed us, to my delight, that Ed Sheeran could kiss his ass.

The music was full of the fun twists and variations one comes to expect of live performance. Before the final verse of Speedway – a personal favorite – the stage went dark for about five beats. The lights revealed Morrissey rocking a tambourine off to the side while a band member took the fore, powerfully completing the song in Spanish. There was, of course, the token audience member who charged scarily onto stage bent and determined on giving the pope of mope a good squeeze (two beefy body guards shoved the man back into the crowd).

The ambiance was enhanced by images and film clips projected onto the enormous screen behind the band. Ganglord was accompanied by recordings of police brutality, The Bullfighter Dies coupled with an image of a bull slaying his would-be matador, Meat is Murder served with graphic slaughterhouse footage, etc.

He rounded out the evening with an incandescent performance of Everyday is Like Sunday. For the encore? An enormous image of Queen Elizabeth II flipping a double bird appeared on screen while Morrissey returned the bird in kind and belted The Queen is Dead.

Suedehead
Alma Matters
Staircase at the University
Ganglord
Speedway
World Peace Is None of Your Business
Kiss Me a Lot
Istanbul
Now My Heart Is Full
Mama Lay Softly on the Riverbed
Will Never Marry
I’m Throwing My Arms Around Paris
First of the Gang to Die
I Will See You in Far-Off Places
The Bullfighter Dies
Stop Me If You Think You’ve Heard This One Before
(The Smiths song)
What She Said
(The Smiths song)
Meat Is Murder
(The Smiths song)
Everyday Is Like Sunday
Encore:
The Queen Is Dead