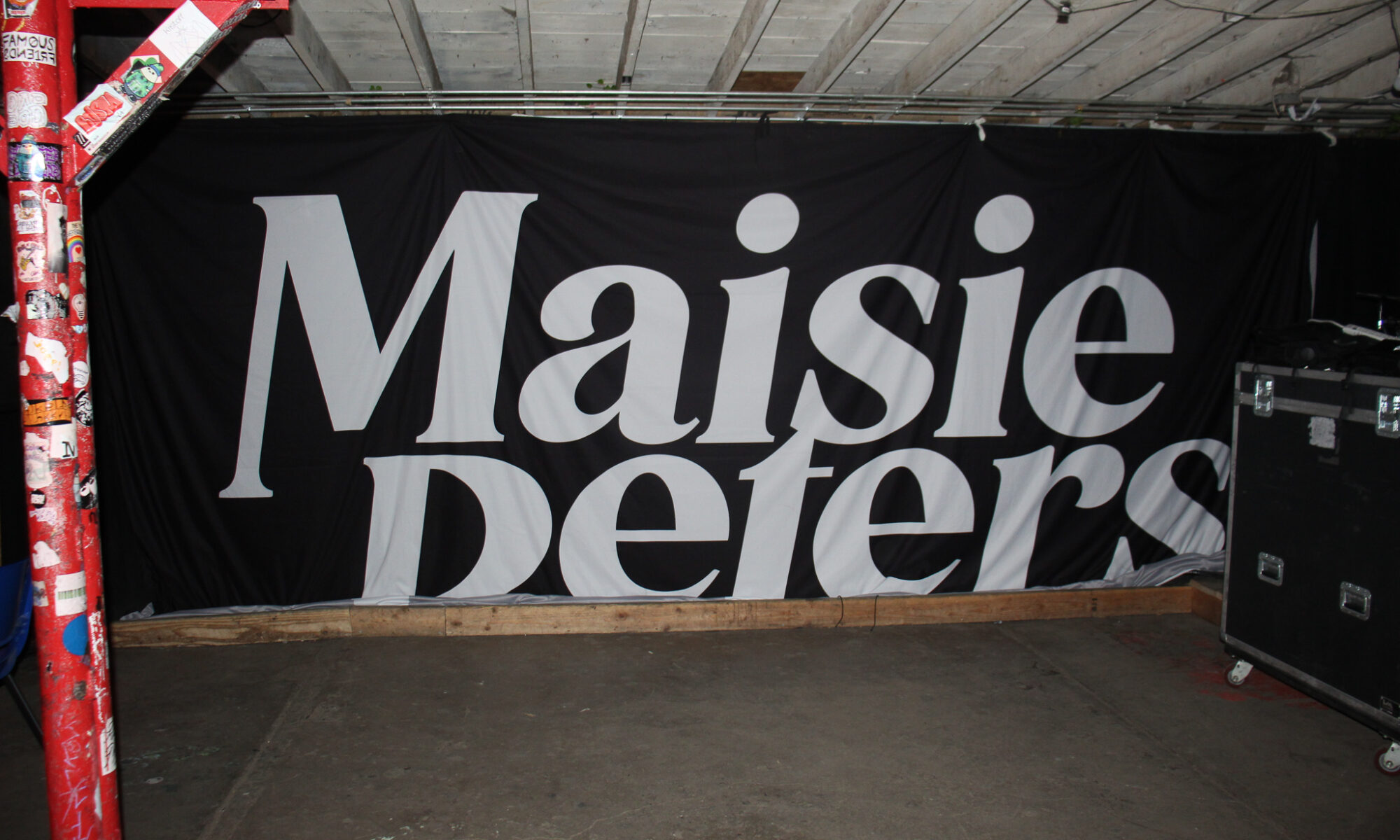 I’ve been asked on numerous occasions if concerts are boring to me now or if they’re watered down because I’ve been to so many.  The answer is always no.  I’m never bored of live music and I don’t think I ever will be.  The old adage in theater is that no show is ever the same.  I think the same goes for concerts.  The setlist might be the same, the lyrics are the same, even the venue might always be the same.  But each show has a life of its own.

That was never more evident than on March 23, 2022..  I was invited to cover British popstar, Maisie Peter’s sold out show at Kilby Court in Salt Lake City.  As I approached the venue I noticed an exceptionally long line.  Keep in mind I arrived at Kilby Court about 5 minutes before the opener was scheduled to take the stage.  I wondered what the delay was.  My first thought was that there were so many people that it was taking longer to get them in than expected.  But as I approached the box office I could tell it was something much different.  There was no power!

As I entered the courtyard I could see tour and local staff working frantically to make something happen.  They had two generators going and lights and speakers started working.  When the line outside could hear a soundcheck taking place they cheered.  There was still no guarantee this show was going to happen, but they were trying.  Maisie herself popped her head out of her tour bus and invited her fans in line to sing along with her to one of her songs.  Of course, they indulged her and it was a really fun moment that would not have happened without the circumstances.  She assured the crowd that things were being worked on.  Peters also told everyone that she and the band were inside the bus working out an acoustic set just in case.  This delighted the crowd.  No matter what, there would be a show in some form.

I have to hand it to these fans.  They remained in good spirits throughout the whole ordeal.  They had to wait in line much longer than I’m sure they expected, but they stayed positive.  Each time a member of the crew would come in and out of the bus, they’d be cheered.  Chants of “Jack, Jack, Jack!” or “Harry, Harry, Harry!” would ring out.  It was all very fun.

The time finally came.  Fans were let into the venue and the scramble was on to get inside.  Everyone was respectful.  No one rushed in too aggressively. Kilby Court was jam packed! The crowd overflowed out of the venue and into the courtyard.  They didn’t have to wait long.  I think everyone was anxious to get the show going.  There’s no telling if or how long the setup would last.

Maisie entered the stage and the crowd went wild.  That’s a typical reaction to a pop star making it to the stage. But this sounded different.  There was a sense of relief mixed with elation.  I’m sure everyone in line, now in the venue had worried that the show wouldn’t happen.  But Maise Peters was on stage and the concert had begun.  Sure, the lighting was worse than it usually is at Kilby Court.  But no one cared.  The show was in progress!

I was impressed with how good the sound was.  I didn’t know what they were going to be able to do, but I thought the show sounded great.  Well, from what I could hear.  After I left the side stage, the venue was so full that I had to watch the rest of the gig from the courtyard.  That’s usually fine, but due to the generators, if you were outside the venue, you were not hearing the music.

Fans stood by the window to at least watch the show. Some resting their ear against the window to try and hear something.  Again, I thought I’d hear complaining and instead these people by the window made the most of it.  They got to know each other and just had fun with the unique situation.  I loved seeing it.  I’m sure it was disappointing to not get to see who they came to see.  But rather than be negative, they still seemed to have a good time.

The unusual situation for me is, I’m not really able to review the show the way I normally might.  For the first three songs when I was inside, I thought the band sounded excellent.  They looked like they were having so much fun.  It’s possible that they were just so excited to be playing.  Maisie sounded great and she was so connected with the crowd.  At the beginning of the show, there was no spotlight on her.  Fans used their phone lights at first to help out.

I believe it was her photographer that was able to shine a light on Maise so everyone could see her face.  While I can’t review this song or that song, I can judge by the crowd’s reaction.  They absolutely loved it.  They roared with every big note, they were thrilled with every hair flip.  It was easy to see through the window how well this show was going.

Not only was the crowd loving it, it seemed to me that Maise was having a blast as well. The backdrop with her name was too big to be the backdrop in this show.  So it was placed on the side of the venue.  Looking at the size of the banner I figure Maise Peters has been playing much bigger venues than this.  It would have been easy to not give as big a show due to all of the circumstances.  And let’s be honest, Kibly Court is a very unique venue.  It’s not a place you want to play your entire career.  It’s a wright of passage venue.  So considering how the night began, it would have been easy to brush off this show.  But if I had the chance to chat with Maisie, I bet she’d say it was one of the best.

Ive been to a lot, and I mean a lot of Kilby Court shows.  I spoke to some staff that night and they shared that they have been going to shows there long before ever working there. None of us had seen anything like it at Kilby Court before.  What I heard was there was going to be some work done on some power lines, but Kilby Court was told it shouldn’t affect them.  Well, clearly it did.  They were left without power.  I commend everyone for their innovation in making this show happen.  Maisie and her band are to be commended for continuing on with the show and not only that but for giving her fans a night to remember.