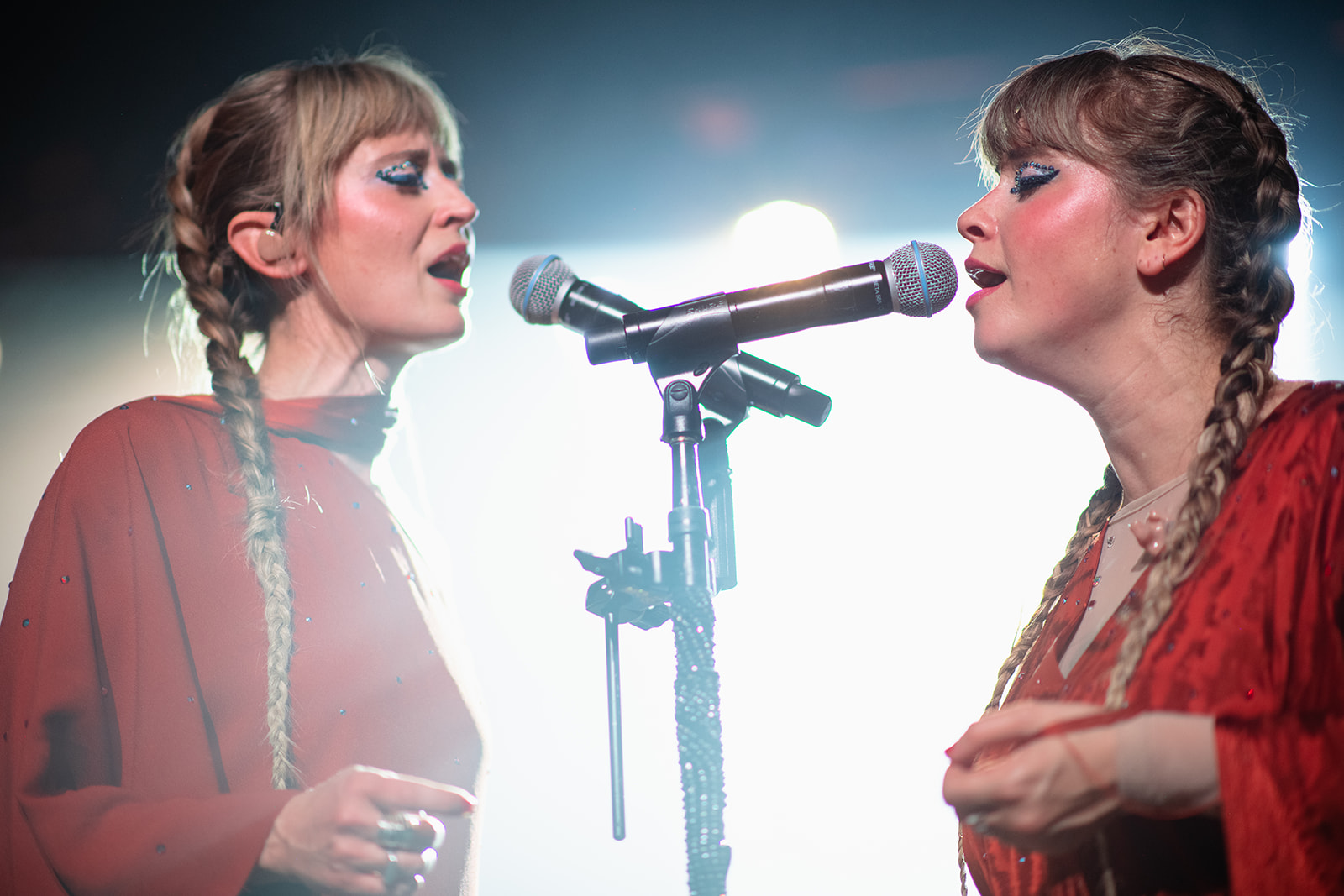 On Saturday, November 12th, the band Lucius brought their Feels Like Second Nature tour to Salt Lake City. They put on an unforgettable concert for a sold-out audience at the Commonwealth Room. This was only my second time attending a concert at the Commonwealth Room. But it has quickly become one of my favorite venues in the area. I enjoy its intimate atmosphere and have been impressed with many of the artists I have seen on their concert schedule.

I was not familiar with Lucius before Saturday night’s show and wasn’t sure what to expect. But I had heard great things about them. The indie pop band originated in Brooklyn in 2007 with its two lead singers, Jess Wolfe and Holly Laessig. In addition to their 3 studio albums, the band has also collaborated with many well-known artists, including, Roger Waters, Ozzy Osbourne, Harry Styles, Sheryl Crow, The Killers, and Brandi Carlile. Their current tour is in support of their Second Nature album. Which was released this spring and was produced by Brandi Carlile and Dave Cobb. I made my way through an eager crowd full of fans and noticed many people wearing sequins or sparkles. As I admired all the eccentric, disco-style outfits around me, I knew I was in for an exciting evening.

Opening the night was the very talented Abraham Alexander. Alexander’s set was short but full of soul. His vocals were smooth and passionate as he sang. Between songs, he had a very natural stage presence, and easily connected with the crowd. Whether he was making a witty joke or sharing something personal and vulnerable, he came across as someone genuine, and excited to be there. Before singing his song “Stay,” he told the audience how he had the special experience of recording the song with Gary Clark Jr. A musician whom he had looked up to for many years. Alexander has previously toured with and opened for Leon Bridges, Black Pumas, and other artists. With his talent and charisma, I imagine it won’t be too much longer before he returns to Utah headlining his own show.

The house lights faded, signaling it was time for Lucius. All eyes were on the stage, now covered in colorful stage lights and fog. The crowd went wild at the first sight of Holly Laessig and Jess Wolfe, who stepped out wearing sparkly boots and red dresses complete with fringe and rhinestones. With long blonde braids and dramatic makeup, they looked stunning. In both hairstyle and wardrobe, they each had a look that was very similar, yet still unique. Behind the duo, colorful lights created a spiral that resembled their Second Nature album cover.

As they stepped in sync toward the front of the stage, they sang their first song, “Second Nature.” Like many of the songs they sang that night, this one was full of funk and synth. Their two uniquely powerful voices blended perfectly. Their synchronized movements and hypnotic vocals captivated the crowd immediately. It kept them in a trance, dancing and singing along, throughout their 16-song set. The large disco ball hanging from the ceiling of the Commonwealth Room seemed like it had been waiting specifically for this show. It brought the ambiance to the next level each time it was hit with a spotlight.

I enjoyed watching how much fun the crowd was having. I found myself wishing I knew the words so I could sing along. I’m not blessed with the same vocal talent Jess and Holly possess. So it’s probably best that I stayed silent. My dancing skills, on the other hand, are actually just as terrible as my singing. So I also stood still. Standing silently in the corner of the venue, I quickly became the newest  Lucius fan. I was completely blown away by their talented performance.

The flow of the evening felt flawless as the leading ladies equally shared both the spotlight and microphones while entertaining their audience. Occasionally they would both play identical keytars as they sang. They played several songs from their new album, including “Next to Normal,” “Heatbursts,” “Promises,” and “24.” Mixed in with their newer music, they played older songs, “Tempest,” “Dusty Trails” “Until We Get There,” and “How Loud Your Heart Gets.”

Near the end of the evening, Laessig and Wolfe walked off stage for a few minutes. As the entire audience kept their eyes locked on the stage waiting for their return, the duo, now dressed in silver sparkling outfits, surprised their fans by walking straight through the middle of the crowd. As they reached the center of the venue, they asked everyone to sit down on the floor.  This was something I had never before witnessed at a concert, and I was intrigued. As everyone in the room sat down, the venue got very quiet. A single spotlight illuminated the ladies, and they started to sing “Two of Us On the Run” from their 2013 Wildewoman album. It was a powerful song, and the unique way they chose to perform it made it even better.

After singing in the middle of the crowd, they made their way back up to the stage to finish the night. They ended with their fun and catchy song “Turn It Around” and a cover of Donna Summer’s “I Feel Love.” While still singing the last song, they also took a minute to thank everyone on their crew. From their touring musicians to their lighting tech, their merch gal, and their tour manager, they named them all while still dancing around on stage. This part felt like a fun version of the credits at the end of a show. I thought it was pretty awesome for them to include all the people who worked so hard to make the concert the success it was.

It was an amazing night, and I am already hoping I will get another opportunity to see them perform in the future. When they do return to Utah, I will be more prepared to wear something sparkly to their show.