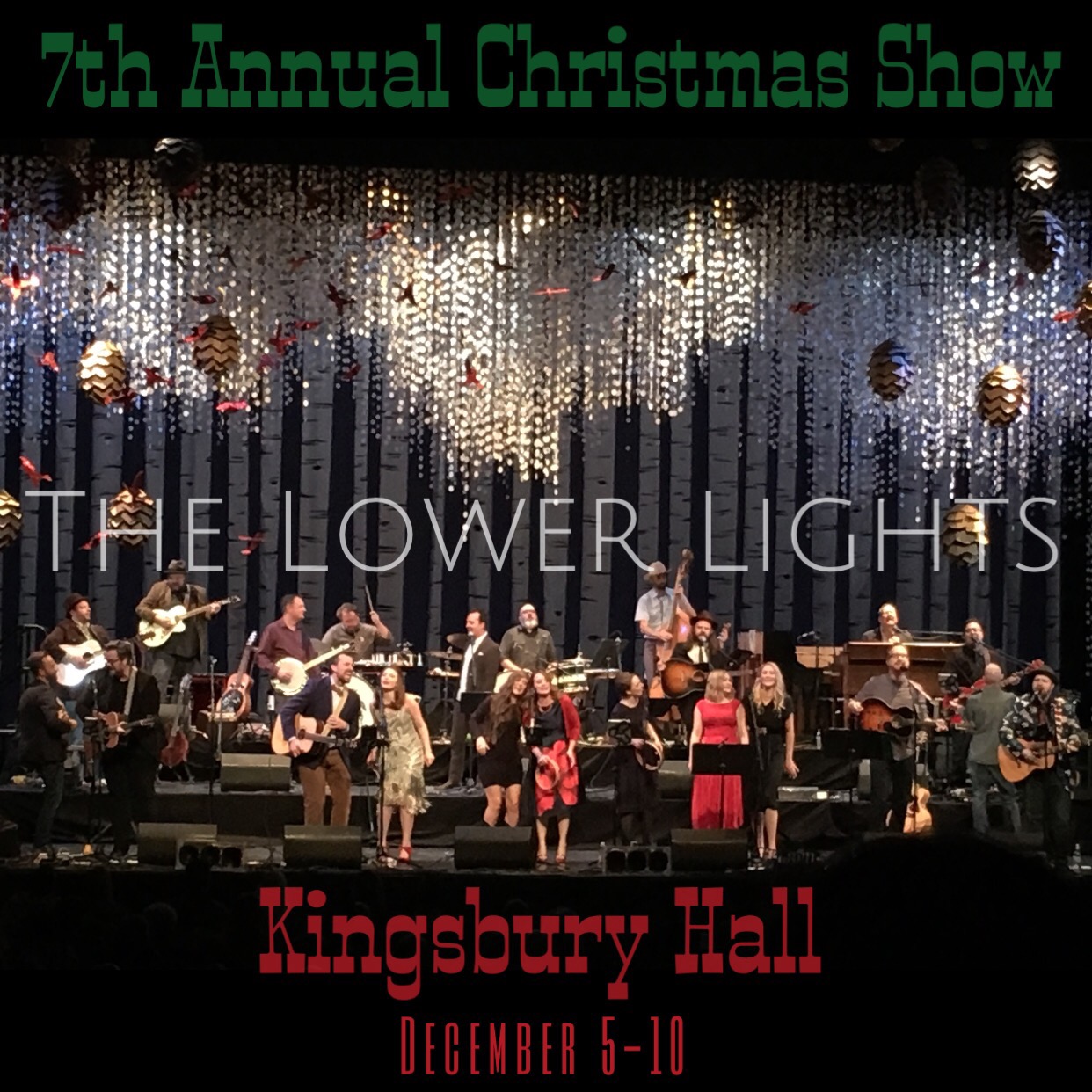 Last night I had the extraordinary experience of seeing The Lower Lights opening night of their 7th annual Christmas Concerts.  There are so many things I want to say about this Americana orchestra! However, because it was opening night, and they still have five shows remaining, I want to refrain from spoiling anything for those who will be attending future dates. So without specifics on the set list or particular highlights of the show, let me tell you just how great this show was, and if you don’t have a ticket yet, why you should get one.

So let me first say that this show begins at 7PM.  Apparently, a lot of the audience thought the show began at 7:10, or 7:15, or even 7:20!  Come on people!  This band works hard.  On all the songs! So it’s not ok to miss the first 5 songs.  I understand that things happen and sometimes we’re just late to stuff.  But there was an alarming amount of people coming in late. There is so much more I could say about this, but the concert was so good, that I’d rather focus on that.

Kingsbury Hall is a beautiful venue.  If you haven’t been to a show there, I recommend it.  It’s the perfect venue for this kind of concert too.  The stage is large, yet the venue is intimate enough to where every you have a good view from any seat.  The only negative can be that parking is kind of a struggle.  What I would suggest is give up trying to park on the street, or anywhere right next to the venue itself.  Just drive south to the Rice-Eccles Stadium parking lot, and walk over.  It’s about a 5-minute walk, ten tops, and there is plenty of room.  Trust me it’s worth it.  For some shows, they even offer a free shuttle to Kingsbury Hall.

Monday night concerts are always a little tricky.  The weekend is over, and the crowd tends to be a little more reserved.  Such was the case last night. I was in a good place in the audience to where I could see a lot of faces.  Despite the less vocal, or physically enthusiastic nature of this audience, their faces did show me that they were loving every minute of this concert.

As I understand it, The Lower Lights have had up to 30 or more members performing with them.  There are 21 talented artists in this lineup, and I was expecting the show to begin with all of them walking on stage for a big first number.  But one lone man, with an acoustic guitar, walked on stage into a solo spotlight and sang us a song to start things off.  And that’s the beauty of concerts.  To be pleasantly surprised at any moment.  Now as I mentioned, there are 21 people in this band, so I apologize now for not mentioning all of their names.  Just know that every one of them is talented, and makes their own positive mark on this show.

Following the opening song, the rest of the band did take the stage and blazed through a number of Christmas favorites.  While I’m not sharing the setlist in this review, I do want to say to those wondering if they’ll hear Christmas songs they like or know, that the answer is a resounding YES!  You will not come away with this concert feeling like you missed out on hearing a Christmas song you liked.

The band entered and exited the stage with such fluidity.  I have been to many shows, with much smaller lineups that take forever to switch instruments, bring people on and off stage, and it really takes away from the show.  The Lower Lights seem to have perfected this art.

The show began with one man and ended with the entire band, but throughout the night, the band shifted into ensembles of varying sizes.  I was impressed with the diverse talents that are within The Lower Lights.  They have an Americana or folk-country sound, and there were times where I felt like I was at The Ryman Auditorium in Nashville. There were other times that I felt like I was simply in someone’s back yard listening to some friends play music.  And some of my favorite moments were when I felt like I was at a tent revival meeting in the midst of the Blue Ridge Mountains of Virginia.  I think it takes real talent to be so grand, yet bring such intimacy to an audience.

I really enjoyed the way they interacted with each other as well as those in attendance.  There is no front person in this band so different members would take turns addressing the audience.  It was fun to see the range in personalities when songs were presented.  Some of them presented a song with humor, some with sweetness, some with emotion, and some with a soft yet serious tone.  It’s obvious how much these band members care about each other.  It would seem that there is no ego within the band.  That they are there to play this cherished music and fill the hall with the Christmas spirit.  Which they did flawlessly.

Ok, I lied.  I have to tell you about one song.  But just one, I promise!  Along with being pleasantly surprised at concerts, I also love when a band plays a song that I’m really hoping they’ll play.  With all the Christmas songs that exist, I did my best to prevent myself from getting my hopes up.  Because you can’t play them all.  But with this style of music and this particular song, it just made sense that they’d play it.  And they did.  One member of the band invited the audience to sing along.  They then played one of my all time favorite Christmas songs “Go Tell it on the Mountain”.  I was smiling from ear to ear.  My apologies to the older gentleman sitting next to me, because I was belting out that chorus as if I was on stage.  Their rendition of this song exceeded every expectation I had.  And, it wasn’t even the best song of the night!  So if that song was that amazing, just think about how great the rest of this concert is.

The last thing I want to mention is what we think of when we hear the term “Local Artist”.  Many times, and I’m guilty of this too, we hear that and think that they’re not as good as the artists on the radio, or with a major record deal.  How wrong we are. The Lower Lights are a band made up of “Local Artists”.  I believe each member of the band, while not all of them are currently in Utah, do have Utah roots.  And yet, if they played at the Ryman in Nashville, or if they played at a tent revival in Virginia, honestly if they played the Hollywood Bowl or Madison Square Garden, no one would think twice.  They would simply know that they are listening to a band with an exceedingly high level of talent that puts on a fantastic show.  So, be sure to pay more attention to “local artists”.  I know I will.

Go see this show!  There are still tickets remaining, but let me assure you, they will be snatched up.  Some of them by me, because I’m going back at the end of the week.  Yes, it was that good.  If you need uplifting or help in getting into the Christmas spirit, then, by all means, get to this concert.

For more information, and to purchase music albums and tickets to the show go to…