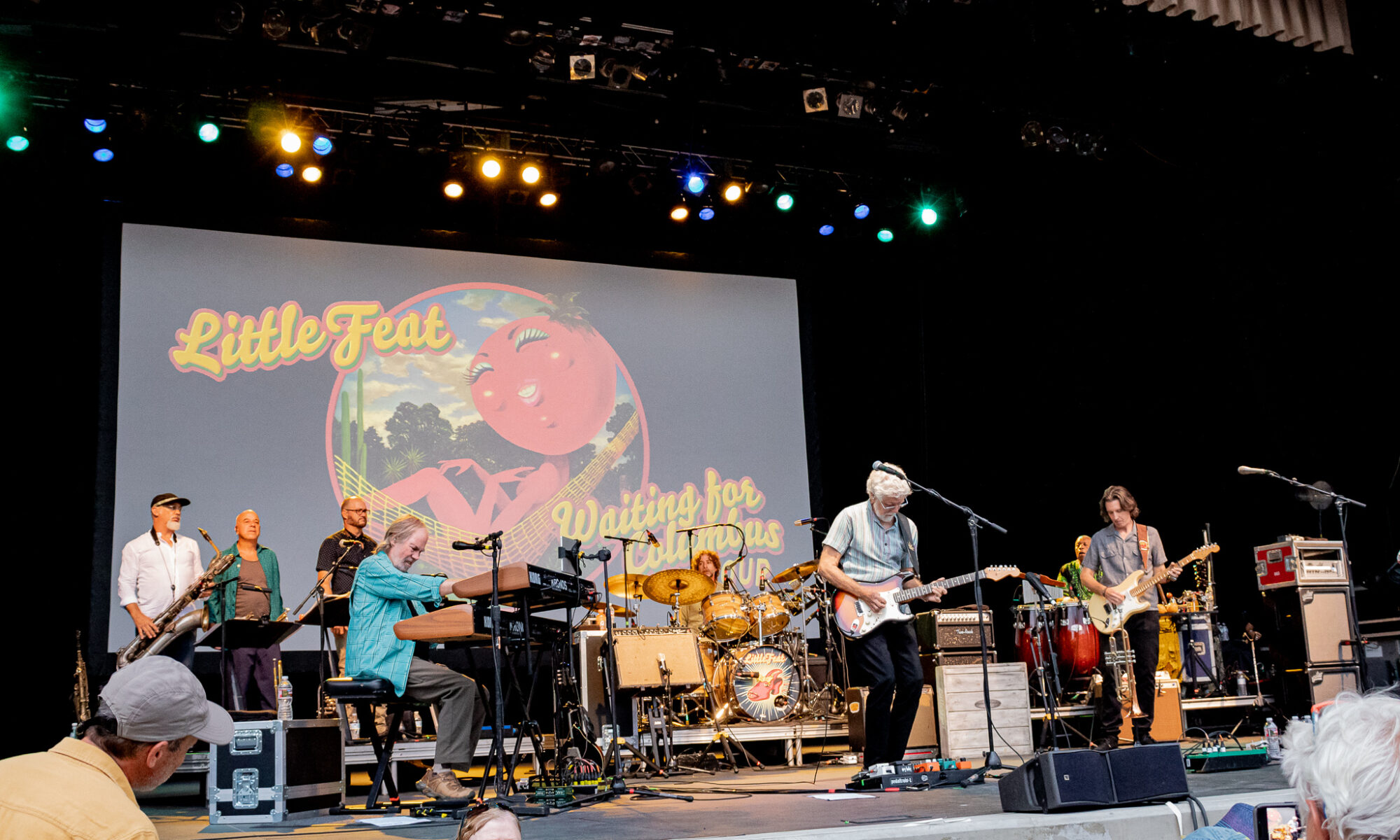 Sandy Amphitheater was the perfect setting for a concert on Monday, August 1st. Little Feat and Hot Tuna drew in a crowd that have loved these bands for years, maybe decades even! After all, the show was a part of Little Feat’s 45th Anniversary tour. The Waiting For Columbus 45th Anniversary Tour 2022, where they would be playing the entire Waiting For Columbus album! There were many fans sporting tie-dye and Hawaiian or brightly patterned shirts. Which ended up making sense as Little Feat had a tie-dye shirt in their assortment of merchandise selection. And when each band took the stage, they had members also dressed in brightly colored shirts!

Hot Tuna was first up on Monday night. The two leading members of the three on stage were Jorma Kaukonen and Jack Casaday. Jorma and Jack were in the legendary 1960s rock band Jefferson Airplane/Jefferson Starship. Their set gave a very relaxed vibe from the get go. But even with that relaxed vibe, they were so captivating! Even though their music projected strongly and clearly throughout the amphitheater, the calming sounds coming from their guitars and voices seemed almost seemed hushed – in a good way. Adding to the peaceful feel of their set! A lot of their songs were very bluesy. While others sounded like a mix between folk music and classic acoustic rock music.

A few songs in, Jorma announced that they’d be playing the song, “Ain’t In No Hurry”. He said when you get to their age, that’s how it is. It was another song that was easy on the ears with a good message, too. As I made my way through the amphitheater to get back to my seat, I noticed that everyone that I passed by were seemingly so content. Many were beaming from ear to ear thoroughly enjoying the show. Toes were tapping, and people were swaying to the beat of the music. All of which made for a positive atmosphere! Hot Tuna finished their time on stage with the, “Winin’ Boy Blues”.

When they were finished, the crowd honored them with a standing ovation that was well deserved! Their intricate guitar playing, just the right amount of percussion, and smooth vocals were so impressive! Those in attendance made it clear that they loved getting to watch those veterans of the music scene play!

Holding Off the Weather

It was a mostly clear, warm summer evening. But between Hot Tuna and Little Feat, some clouds started to roll in and a few rain drops fell every now and then. Some concerned remarks could be heard in the crowd, as thunder and lightning were forecasted for the evening. It had held off that for that long. So I was hopeful that it would continue to hold off so that the show could proceed as scheduled. As we were all waiting for Little Feat to start their set, I got to chat with many people about the show and the bands. Some had seen Little Feat as many as four times before. For others, they were thrilled to see them for the first time!

One said that they were particularly excited because they had heard that Little Feat were putting on a really fun show for this tour! There were a few people that even came up to me and let me know that I was doing well, taking photos, or were just simply interested in what I was doing there with a camera. Which isn’t a common conversation I have at shows. The crowd that night was one of the most friendly crowds I’ve ever been around. Everyone was kind and up for a chat with people they didn’t know prior to that evening!

When Little Feat took the stage, those in attendance were beside themselves with excitement! People were up on their feet, waving at the band, and started dancing as soon as the music started! The band was equally as joyful as they greeted the crowd with big smiles on their faces and waved back to those waving at them! They opened up their time on stage with a beautiful harmonic round of, “Join The Band,” which was followed by the song, “Fat Man In The Bath Tub.” After a few songs, cofounder Bill Payne said, “We came to play! You can guarantee it! Can’t dance though!”. And not long after, Bill even dedicated a song to a couple who was there celebrating their 49th wedding anniversary!

They played through songs like, “Time Loves a Hero,” “Day or Night,” and, “Spanish Moon,” with ease. Filling the time between songs with the most cohesive and enjoyable jamming I’ve ever been able to hear live! They could pull off playing any style of song, I’m sure of it! A lot of their songs definitely had a southern rock sound, while some almost sounded a little bit like reggae or funk. But they all tied together with a consistent Little Feat sound at the same time. Most of the songs were upbeat which really built up an energy with the band and the crowd!

Not only was the band fun to watch, but so was the crowd! They danced and clapped through every single song! When I looked around, the whole group of them seemed to bob up and down in sync! I went into this show not knowing what to expect as I wasn’t familiar with the band prior to that night, but, wow, they were so incredibly talented! Each band member brought an element of skill and entertainment. Scott Sharrard is the newest member of the group, but you wouldn’t be able to tell because his voice and talent fit right in with the other band members!

They also had a lot of fun visuals playing behind them during their performance, too! For one song, there was a slide show of photos of the band in their early days, and for another, there was a pattern of 3D shoes, followed by their signature tomato-like looking person!

During the songs, “Dixie Chicken,” “Tripe Face Boogie,” and, “Willin’,” I noticed that the dark clouds that were spotted earlier had rolled in even closer. Lightning started lighting up the sky, increasing in frequency with each song. During, “Willin’,” the intro to the song was slower in comparison to the majority of the previous songs of the night. That, mixed with the intricate components of the song and the lightning, created a really cool ambiance that most concert-goers don’t get to experience. Not long after, the show ended early for the safety of all involved due to the storm.

Though the night was cut a bit shorter than it was intended to be, the audience was still granted a night full of great music from legendary performers! Both of the bands drew the crowd in with their talents from the get go, and the crowds stayed there the whole night! I think that the joy and entertainment that Little Feat and Hot Tuna brought to the Sandy Amphitheater will linger with all in attendance for quite a while!