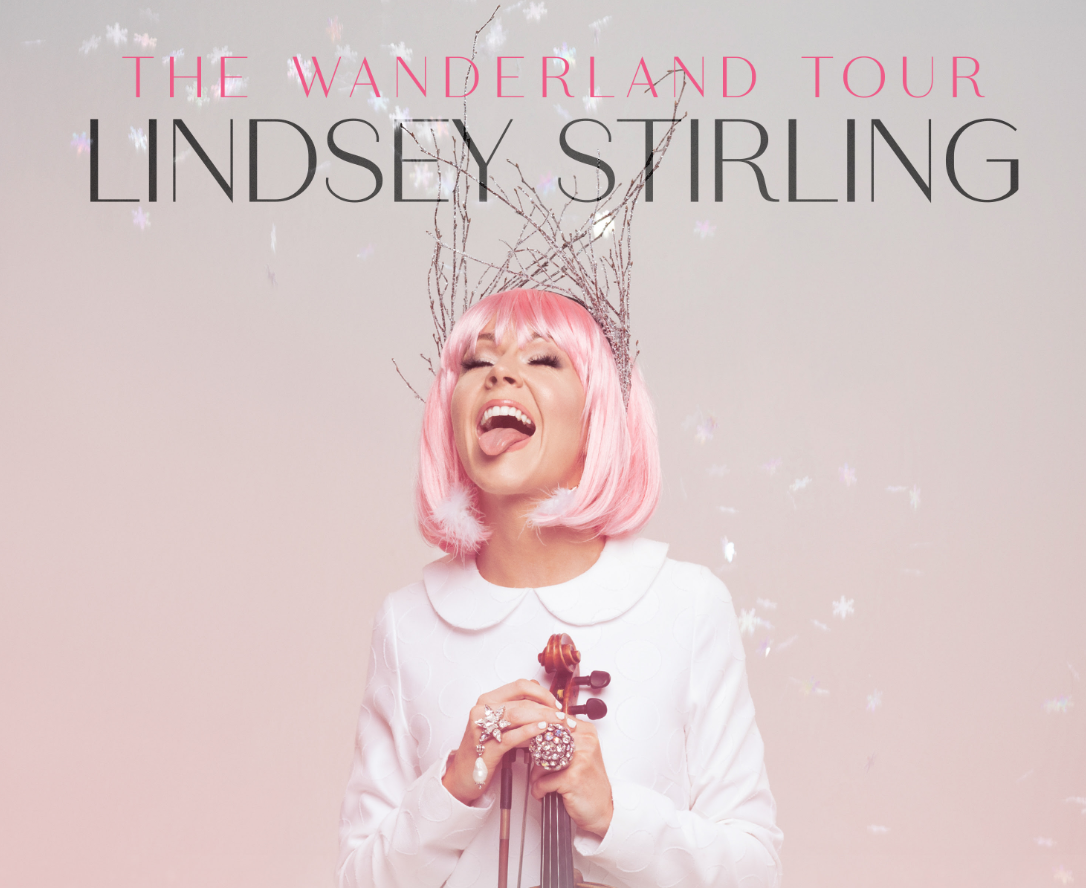 I have never seen Lindsey Stirling perform live before Monday night.  Well, now that I think about it, that’s not really true. I, like many of you, saw Lindsey for the first time at a halftime of a Utah Jazz game.  She was then known as the “Hip Hop Violinist”. I can’t remember if it was before or after her quarterfinal run on season five of “America’s Got Talent”.  But I would never have guessed the worldwide success she’s achieved since then. Not that I didn’t she had talent. I just can’t remember seeing someone perform at a halftime of a NBA game, then seeing them at a show they’re headlining.  I’ve been really happy for her success. It seems she’s worked hard for it, and the work has paid off. Lindsey brought her Wanderland Holiday Tour to the Maverik Center on Monday night. It was a show filled with heart, humor and holiday cheer.

It’s obvious that Lindsey Stirling is talented.  But I have to admit, heading to the show I wondered if a show with a violin as the lead would hold its value as far as being an interesting show for 90 minutes.  There really was nothing to worry about. Stirling put together a really entertaining Holiday show. She opened with “All I Want For Christmas Is You”. I don’t know how she dances like that while playing every note on the violin perfectly.  I can’t even play the violin standing still, so it’s an impressive thing to watch.

Lindsey then tapped into her “Dancing With The Stars” experience by dancing ballroom to “Let it Snow”.  She was joined on stage at times with an ensemble of dancers. She would be in the middle of dancing with a partner then spin out to have a violin waiting for her where she would play for a moment, hand off the violin then join back with her partner.  It was choreographed really well.

Much to the delight of the audience, Lindsey and some of the dancers made their way to the arena floor and paraded around the aisles like a pied piper.  Or maybe a pied violinist? Phones were out taking video of the performers, and smiles were huge. People love it when the talent comes to them. It was fun to watch how excited everyone got.  I learned a lesson to not look down at your phone during a Lindsey Stirling concert or you might miss something. I checked a text and when I looked up there were two people from the audience on stage with Lindsey and her dancers.  The four women split between a woman named Rachel, and the two men split between a man named Johnathan. At first, I thought they were taught the choreography before the show because Rachel pretty much got the choreography down right away.  Johnathan, not so much. But he was a good sport. And it’s not every day you get to perform in front of thousands of people so that had to be fun. Turns out Rachel had been dancing since she was 8, so she was able to follow what the dancers were doing.  I gotta say, she picked it up pretty quick!

Lindsey was joined on stage by a keyboardist and a drummer.  They did a great job back up Stirling as well as adding vocals, and humor of their own.  During a costume change, they introduced a man named Eric Jackson. I thought he was going to come out and sing because they had talked him up as a major talent of some kind.  But Jackson walked out and held up a sign that said “Musical Break” while the band performed a big upbeat instrumental number. He stood up there with a deadpan face while the keyboardist kept encouraging him as if he was doing some amazing feet.  It was pretty funny.

Lindsey returned to the stage with a tiny violin.  She told us that it wasn’t a toy but a child’s violin similar to the one she first learned on.  She then presented her band with a mini piano and a mini drum kit. They sat at the front of the stage and played a Christmas medley.  I know it was meant to be funny, and it was, but I was blown away at how Lindsey could play such a small violin that well. The thing was so small!

This was sort of a homecoming show for Stirling.  While she’s from Arizona, she went to college here in Utah (BYU) and began her music career here.  She showed a lot of appreciation throughout the show for how loyal Utah has been to her.

Now as I stated before, this is the first time I had seen Lindsey perform in her own headlining show, so I’m not sure if it’s usually like this, or if she felt comfortable with the Utah crowd, but she really opened up about the loss of her best friend, as well as her father.  Being a member of The Church of Jesus Christ of Latter Day Saints, she shared some strong and heartfelt Christian convictions and feelings of the Christmas season. It was a special part of the show and as I looked around I could see by the faces of the audience that they were touched by her words.

Lindsey invited her “Nationally acclaimed” ballroom instructor to join her on stage.  It turns out her “instructor” was her dog, Miss Luna. Lindsey Sterling knows her audience so well.  They were eating this segment right up! They were “oohing, and aaawing at ever trick the dog did. I could see laughs and smiles from the front row to the upper deck.

My favorite part of the show had its own unplanned funny moment.  Lindsey performed “Santa Baby”. Turns out, and maybe you fans already knew this, but Lindsey can also sing.  She sang the song then what she called her “fly-olin” named “Destiny” decorated to look like a cloud would descend from above the stage right to Lindsey, and she’d play her violin solo, then it would raise back up to the sky, returning a few times for additional solos.  All was running smoothly when the final time the violin came down, it dropped right on her head. She cracked up to the point of not being able to finish her lyrics. Following the song, she stated that when she thought of the idea, she never envisioned that scenario. She was a good sport about the whole incident.

Lindsey appears to be as genuine a person as it gets.  I think that’s what draws her fans to her. She’s obviously talented, but I think because she seems like an artist who appreciates where she is in her career an the opportunites it has provided her, her fans are commited to her as she is to them. 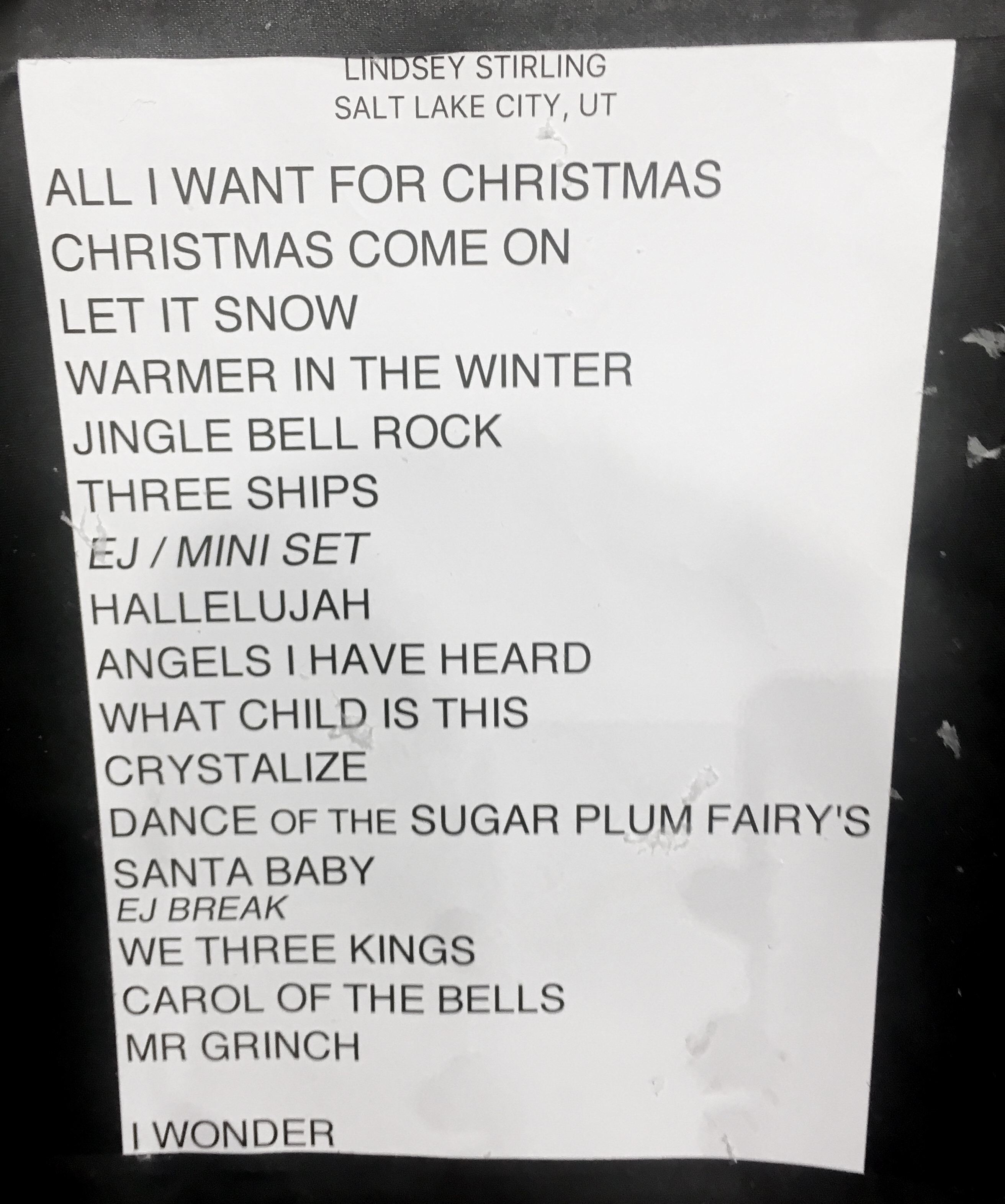