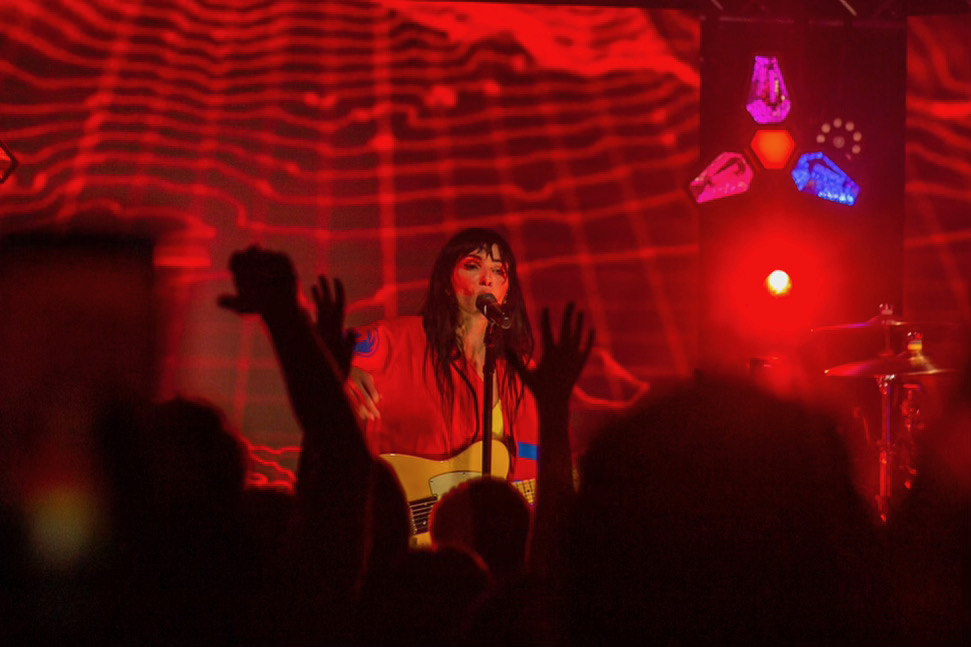 The nightlife in Salt Lake can be as busy and versatile with its events and shows. As tilLLe (Not pictured due to technical issues!) took the stage Saturday night she had a strong presence and playful vibe. Accompanied by a heavy bass line, tILLIe opened with her song “Peachie”. Swinging to the beat and grabbing the mic singing “hi, hello, it’s your favorite enemy”. I loved the vibe of Soundwell during her performance. Everyone from the bar to the stage swayed along to the beat.

She introduced her next single “Hell Yeah”. Explaining she’s been through hell in the past two years just like the rest of us. She wrote the song about that experience. The audience bounced to this up-tempo anthem of tILLie’s. I laughed after hearing the bridge of the song. It says “I just wanna wake up, one f***ng morning and not feel like the world is ending”.

She transitioned to her next single “flip a switch” her vocals coming on strong with the guitar strums and drums. I loved her use of different sounds as instruments and how it set the tone for each song. The emotion of the song, going from heavy guitar and percussion and tiLLie singing “I’m not a dog, I don’t respond to a whistle” to soft and zen as she sang “I take ten deep breaths, namaste.”

Next, she performed a cover by the iconic Britney Spears. tiLLie put a fun alternative twist on “Lucky”.  tILLie and the crowd sang together through the first verse, with her encouraging the crowd, yelling “Sing it with me, louder!”

She introduced her brand new single “the me u kno”. The crowd responded in total excitement. tILLie engrossed the audience with her mix of alternative, pop sounds, hailing her genre “nightmare pop”

Lights took the stage, blue shining down on the crowd, opening with her hit single “ice”. I made my way into the venue from the alleyway at the Soundwell. The upbeat tempo of the song got the audience excited as everyone sang along to the words, “ what I mean is, all I need is, just a little emotion”. The guy in front of me raised his hand up, fist-pumping to the beat. I loved the feel of this song, the crowd dancing along to its positive and uplifting message.

Lights is a Canadian powerhouse of an artist. She is a singer/songwriter, with her songs based in electro-pop. She creates melodic songs with a beautiful message accompanied by fun, up-tempo beats. “Up we go” started with a catchy keyboard synth melody as she sang the words  “here in a familiar place”. The audience bobbed up and down to the song, dancing to the words and melody “it’s been a hard year… it’s only up we go.”

“Salt and Vinegar” began with a slow, bluesy feel, as she sang “Nothing like a pep talk to yourself.” Behind Lights, comic strip graphics played on the stage screens, setting the mood for the serious yet playful theme of the song. The mix of blues and thumping bass matched the contrast of the song title. The audience bopped their heads and raised their hands after the bridge of the song as Lights sang “you’re angry, I’m bitter”.

This fully sold-out show ended strongly with the audience screaming for more. People of all ages enjoyed the performance from these two incredible artists. From the adults at the bar to the kids in the crowd wearing headphones. Lights ensured her fans knew they were appreciated and needed saying “I have to rely on you to sing this shit!”