A friend of mine won tickets on the radio to the recent Lady Gaga concert at Energy Solutions Arena, and invited me to go with. I’m sure it’s surprising to some that I said yes, and not surprising to others that I accepted the invite. Just to put it out there, I do enjoy Lady Gaga’s music. I don’t know if I’d consider myself one of her “Little Monsters” (what she calls her dedicated fans), but I have downloaded a number of her songs, and cut a few rugs listening to her jams. I never in my life thought I’d be seeing her live, but the moment and opportunity came. It’s been really hard to explain what I saw, because there was so much going on that my eyes couldn’t take it all in.

First of all, the people watching was at an all time high. Interesting make up, colored hair, platform shoes, g-strings, leather chaps, and that was just one dude. There were so many unique looks again, my eyes couldn’t capture it all without appearing to stare at people. And I was always taught that staring is rude. But I think in this case it was probably ok, even welcomed. When it comes down to it, I probably stood out as the oddly dressed weirdo. And I was in jeans and a polo shirt. The one time I don’t go shirtless with a bowtie and booty shorts! Lesson learned. 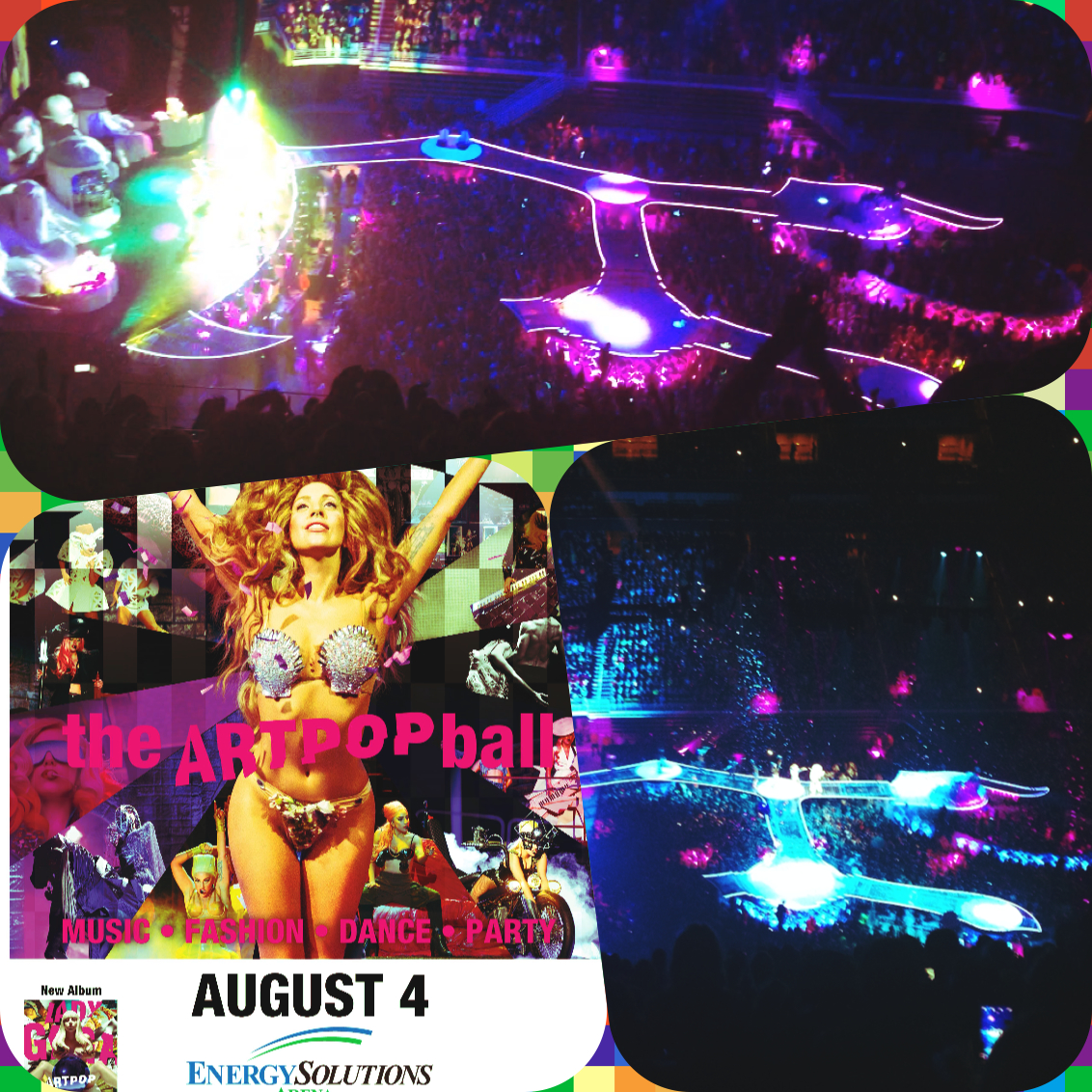 When Energy Solutions Arena was built, I’m pretty sure they forgot that bands might tour through Utah and want to play in a big venue. The sound is probably the worst in any large arena that I’ve ever been in. Which is why I have to compliment the sound engineers on this tour. They mixed the show perfectly. Which is no small task at this venue.

The set design was amazing. The staging looked as if we were in Greece, or maybe even Jerusalem. All the band members were nicely placed in their own little houses. The catwalk was all over the place. On one side of the stage it reached all the way across the arena floor and curved to form a bar for the 21+ general admission to buy adult beverages without having to leave the floor. Smart move Lady Gaga. On the same catwalk was what looked like Superman’s Fortress of Solitude, but it turned out to be one of Gaga’s hidden piano’s that she would be using later in the show. The other catwalk went about halfway down the other side of the arena floor, with a bridge connecting the two. In the middle of the shorter catwalk was a large circular platform where a lot of dancing would be done, as well as a huge chair designed as the monster claw her fans make. Gaga would sit in this later in the show and it would raise up about 20 feet in the air. There were a lot of hidden surprises in her staging, such as trees and flowers growing from out of the stage and catwalk.

My seats were not that great (sweet radio station winnings), so sometimes I felt like I was watching people watch a concert. But only a few times. For the most part, it didn’t matter how high up, or how close any of us were, we were all part of the show, involved in the experience.

The show started with Gaga’s 14 talented dancers spreading out over the catwalk. And Lady Gaga raised up from the stage floor. Before she appeared, it seemed as if the upper bowl would be sitting for most of this show. But when they saw her, not only did they stand up, they went nuts! I cannot express how into this show her audience was. Hands in the air, dancing the whole time, and singing a lot at the top of their voices. They were singing every word from songs that were not singles from her albums.These fans absolutely love her. She strutted the stage and catwalk in perfect time. Every step was choreographed, yet, it seemed totally natural. She told us that tonight was “A celebration of love, freedom, and being yourself.” I couldn’t tell if she had back up singers, or if her harmonies were just back tracks, but whatever there was, it sounded good. And her vocals were amazing. She would scream out at the audience, and then sing these beautiful notes. I don’t know how she does it. She’s dancing the whole time, yet can still sing live. I was winded just walking to my seat. Granted, it was four rows from the top, but when I saw what she was doing, I was embarrassed. I’m sure there were times she was singing along with tracks, but I can’t blame her. She was moving around the entire show. While she was singing an acapella version of “Edge of Glory” she stopped in the middle and said, “Man, the altitude in this place just kills me! I mean, how you do guys breath here? With the smoking and the drinking, and this altitude? You’re superstars, that’s why.” It was pretty funny. The amazing thing is right after she says all that, she hits the highest note of the song. I was impressed.

Say what you will about Lady Gaga, but she can captivate an audience. She gives you everything she has. This show didn’t sell well. I imagine in other towns this show was an instant sell out, but here there were a few areas where they curtained off unsold seats. I was worried that would bring down the show, or maybe Gaga and her crew would just show up, do some songs with lower energy, and get out. But this was not the case. She left it all out there. Literally. All of it. There was one point towards the end of the show where she was dancing like crazy, stops, vomits, then goes right back to dancing even harder! (I’m not going to post it, but it’s online. Feel free to take a look.) It was unbelieveable. When she came back for her encore she apologized for getting sick. And she said she wasn’t trying to do any “performance art” tonight. I imagine she was referring to a controversial show she did at the SXSW festival in Austin, Texas where she had “Vomit Artist” (Meaning, she drinks paint, then pukes it up on a canvas to make art.) Millie Brown, vomit on her. So this wasn’t that. She had just pushed herself too far. I’m sure the altitude, and the nonstop dancing and singing got to her. The crazy part is she comes out for her encore and kills it on her final song “Gypsy”. If I vomited during a performance I’m pretty sure there wouldn’t be an encore. But Gaga is dedicated to her fans, and they are absolutely devoted to her.

This show is not for everybody. That is for sure. But I’ll tell you what, if anyone wanted to come to this show, all would be welcomed. I don’t think I have ever been to a show where there was such an open minded, accepting and free spirited atmosphere. I saw people who in another setting would be reserved, let loose, and just let it go. Gaga set the precedence early on that this was a safe place, and that people could just have a good time and not worry about being judged. And the fans went along with that. It was great. They had complete command of this crowd. There was a time where she asked people to put away their phones, and just be in the moment. And would you believe it? The phones went away for a while. I didn’t think that was possible in this day and age. I think Lady Gaga feels safe in this environment as well. She knows the people there are with her, and her perceived “weirdness”. Here she is not weird. She is the leader, and inspirer of those that feel rejected, and misunderstood.

In an arena show, if you’re not close, it’s easy to feel distant from the action and not part of the show, but other than Bono from U2, I’ve never seen an artist engage with the audience in such a way that makes an arena feel like a small club. And if anyone with reading this knows me, they’ll know that that is high praise from me. But she in fact did that. She has that kind of power. I have to say, it was inspiring.

I had a great time at this show. I don’t know if I have anything critical to say about it. If I was going to say anything, I would say she left a few hits off of the setlist. And she only did a slow version of “Born this way” and an acapella version of “Edge of Glory”. But the show was so fast paced and electric, and fun that it wasn’t until I was walking out that it even came to mind. The staging was amazing, the lighting was perfect, the sound was well done, and the costumes were creative, interesting, and multiple. But even without any of that, I think Lady Gaga is an artist with endless depths of talent. She knows what she’s doing, and why she’s doing it, and for so many, it’s working. And who knows, maybe there is a “Little Monster” in me after all.