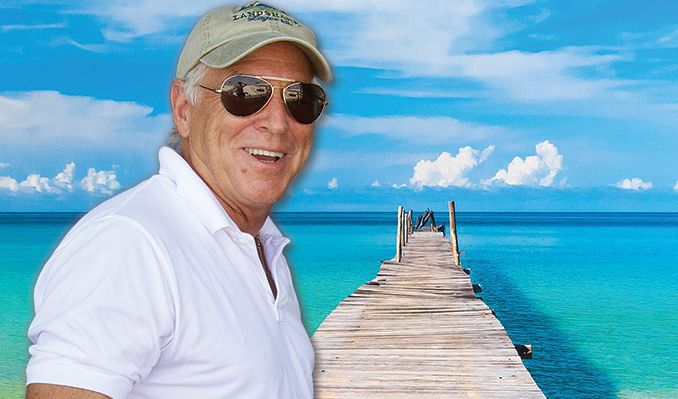 What would you say is the best way to stay warm as the temperatures here in Utah begin to drop?  Bundle up? Throw a log into the fireplace? Hot cocoa? Those are all great ideas.  I submit that the best way to get warm on a cool fall night is to see Jimmy Buffett in concert.

Buffett made his much-anticipated return to Salt Lake City and he made Vivint Smart Home Arena feel like a tropical paradise. ( Was going to say he turned Vivint Arena into Margaritaville, but seriously, how many times has that line been used when discussing his concerts?)  Jimmy Buffett had been away from Utah for 27 years. The guy knows when to make his stops in Utah. He came to what was then the Delta Center when it was brand new and then returns to what is now Vivint Smart Home Arena after it’s completely renovated.

Now I had heard that Jimmy Buffett has dedicated fans.  But what I witnessed went beyond my expectations. They’re called “Parrot Heads”.  And there were people literally wearing hats that looked like parrots. But that’s not all.  There were fans dressed as sharks (in reference to the song “Fins”) Pirate costumes (In reference to “A Pirate Looks at 40”) grass skirts, leighs, and of course every style of tropical shirt known to humankind.  I think Jimmy Buffett fans might be single-handedly keeping Tommy Bahama in business.

Caroline Jones, an up and coming country singer opened the show. In 2017, Caroline was named “One of the 10 need-to-know new country artists”.  Jones opened her song with a great cover of Joni Mitchell’s “California”.  She was then joined on stage with Eric Darken, the percussionist in Jimmy Buffet’s Coral Reefer Band to sing a couple of her original songs “Bare Feet” and “Tough Guys”.  I’ve always felt like Utah audiences have been very supportive of opening bands.  This was no exception. They were cheering after every song, and clapping along during some of the songs.  Jones was then joined on stage with Coral Reefer Band guitarist Mac McAnally to conclude her set by covering a song penned by McAnally titled, “Down the Road”.  She invited the audience to come say hi following Jimmy Buffett’s set where she would be taking pictures and signing autographs.  On my way out of the arena, I walked past a lengthy line of Caroline Jones fans who were delighted to get to meet her. I have a feeling we’ll be seeing her come through Utah on her own very soon.

The transition from Caroline to Jimmy took only a few minutes. The stage was already set up, so all that needed to be done was to remove Caroline’s guitar microphone and monitor.  Once that was removed, The Coral Reefer Band took the stage. Jimmy Buffett then appeared on stage donned in white shorts, a blue Hawaiian shirt, and of course, barefoot.

With beach balls being bounced all around the arena Jimmy matched the energy that already existed with “Livingston Saturday Night”.  The energy level increased when Buffett changed the lyrics to say “On a Salt Lake City Wednesday Night!”. Cities love hearing their name called out, don’t they?  It’s a sure fire way to get crowd approval. But I get it. It makes us feel like this is as personal of an experience for the artist as it is for the fans. When it’s done in a genuine way, it definitely works.  And with Jimmy Buffett, it worked.

The energy built even more with Buffett’s cover of Van Morrisson’s “Brown Eye’d Girl”.  I mean, who doesn’t love that song? And as with the other covers Buffett would do throughout the evening, he makes the song his own.  Mostly these songs will contain a tropical island feel or a casual nature. The whole night had that vibe, and it was actually really relaxing.  That’s not to say that the concert was mellow, boring, or dull. It was quite the opposite. The show was so fun that it was easy to let loose and enjoy the show.

Jimmy apologized for taking so long to be back, and that he was happy to have finally returned.  He mentioned that the loved Park City where he and the band were staying for the past few days leading up to the show.  He talked about looking up to the rafters during sound check and seeing some of the banners of the great Utah Jazz legends Karl Malone, and Pete Maravich.  He told us that while he hadn’t heard much jazz music while he was in Utah, he and the band were going to turn Vivint Arena into the biggest Jazz Club on earth.

Buffett seems to really enjoy performing live.  I think a lot of it has to do with the fact that he keeps limits his touring schedule, and from what I understand flies to most of his tour stops.  But even if he was playing shows on back to back nights traveling in an old tour bus, it seems like it would be impossible for him not to be loving being on that stage.

I can’t imagine any fan leaving this show disappointed.  I would not categorize myself as a “Parrot Head” exactly, but I’m familiar with at least a handful of Buffett’s greatest hits.  And from what I can tell, he played them all. Jimmy’s songs range across the spectrum of fun to sentimental. Songs like “It’s 5 O’clock Somewhere” which he recorded with Alan Jackson, “Volcano”, or the crowd involved “Fins” get everyone in the crowd into good spirits.  So much to the point that many fans in the mostly seated upper bowl could not resist standing up and dancing. I can’t say I blame them! I was actually surprised with how many people sat for the whole show. The lower bowl was up and down depending on the song, and the floor was mostly on their feet.

Then, of course, there were songs with a more sentimental tone.  Songs like “Son of a Son of a Sailor”, which is the name of this current tour in celebration of the song and albums 40th anniversary.  Then of course, “Come Monday”, “Trip Around the Sun” both of which he dueted with Caroline Jones, and “A Pirate Looks at 40” were heartfelt in their approached and notstalgic through and through.

The obvious highlight of the night was Buffett’s biggest hit, “Margaritaville”.  The song did not disappoint. People swayed, held their drinks up, sang to each other, and chanted back at Jimmy when the song called for it.  When he sings “Searching for my long lost shaker of salt”, the audience replies with “Salt! Salt! Salt!”. I was not prepared for it. I guess I wasn’t informed that there was going to be crowd involvement. But I learned quickly and got involved the next time the chorus came around.

Jimmy Buffett returned after his encore and performed an excellent cover of the Crosby, Stills, & Nash favorite, “Southern Cross”.  He’s been covering that song for as long as I can remember to the point that I couldn’t remember whos been covering who. It was pretty clear that the majority of the crowd did not want this show to end.  Even after we hit the two hour mark, people were still cheering Buffett and the band on! He finished his encore with a cover of “One Love” by Bob Marley with his whole band. He had the entire arena singing along.  Then he sang an acoustic version of the Jesse Winchester penned “Defying Gravity” with only Mac McAnally, Eric Darken & Robert Greenidge joining him. It was a touching and heartfelt way to end a really enjoyable evening.

Jimmy Buffett is the type of artist that I enjoy cheering for.  He reminds me of Neil Diamond.  Not in his music, but in the way he’s been successful. Never really critically acclaimed, but he’s sold a ton of albums, sold out countless arenas, and gathered one of the most dedicated fan bases I have ever seen.  I think I’ll call him “The Tropical Neil Diamond”. I don’t know if that will catch on, but regardless what critics or naysayers sentiments might be, the man has amassed an amazing career, and put together an excellent concert for his fans.