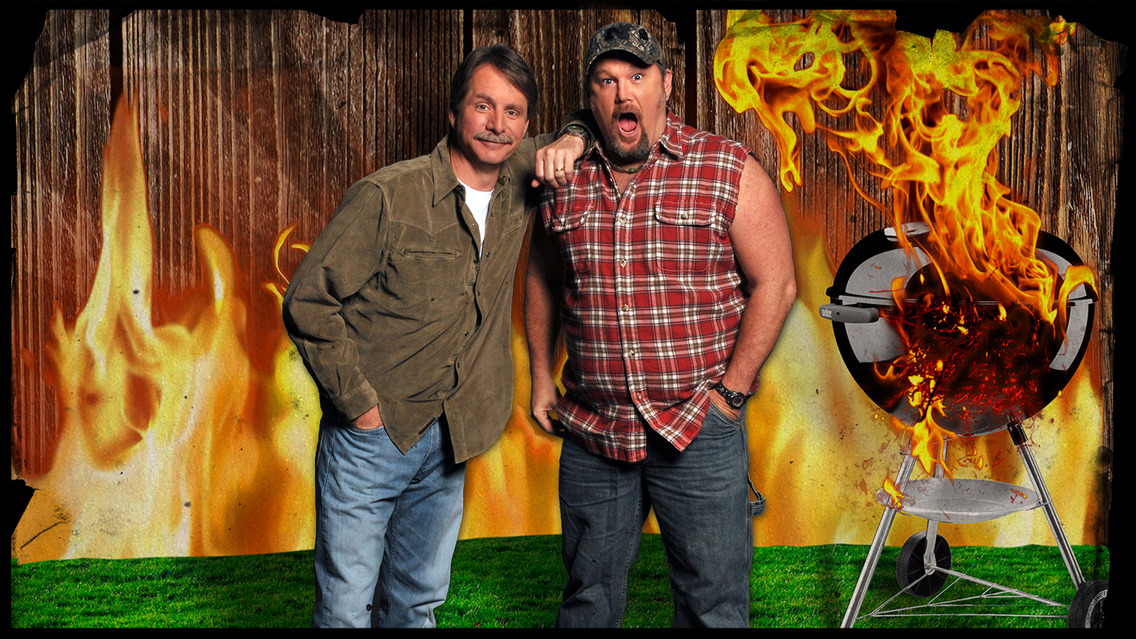 It’s a hot night in the middle of August.  Seems like a perfect night for a barbeque!

Jeff Foxworthy and Larry the Cable Guy hosted their Backyard BBQ at USANA Amphitheater Friday night.  And they brought some guests with them.

The show opened with the evening’s’ emcee, comedian Nick Hoff taking the stage.  I thought he got a really good response from the audience during his set.  It seems like it would be really hard to get a crowd to engage with you right at the beginning of the night with the sun still setting and people just getting to their seats.  But he was good, and the audience seemed to really enjoy him. He had the right personality for it, and that was to his benefit when it came to his emceeing duties as well.

Nick then introduced the first band of the evening.  A local band out of Cottonwood Heights, Saylo.  I enjoyed them.  I thought they were a really solid band.  The only thing I would say is their sound didn’t really fit the theme of the evening.  They didn’t scream, comedy, barbeque, or blue collar.  I thought they would have been better suited at the upcoming Love Loud festival, or maybe the Twilight Concert Series.  That being said, if I was invited to play for thousands of people at USANA Amphitheater, fit the theme or not, I would have accepted the invite too!  I thought they did a good job all things considered.

Jeff Foxworthy was next.  I have to admit, I didn’t expect to see him so early in the evening.  It was a surprise when he was introduced, but I was excited to listen to him.  It’s an interesting transition to go from a band to a comedian, but I thought the change was pretty smooth.  The audience, of course, roared when Jeff took the stage.

Now, because the material in stand up comedy is very specific and repeated in every town, I don’t want to share the jokes/ stories that were told.  I wouldn’t want to spoil that for someone who wants to see Jeff or Larry down the road.  Let me just say this, if you have enjoyed Jeff Foxworthy’s comedy in the past, then you’ll love this material as well.  While he is known for his “You might be a redneck…” line of jokes, he steered clear of being pigeon holed and branched out with hilarious stories and jokes.  Of course, they were generally centered around a blue collar theme.  Jeff was great, and the audience showed their approval throughout his set.

Larry the Cable Guy was next to take the stage.  It’s interesting how fame works.  Some years back, Larry was the first to take the stage in the Blue Collar Comedy Tour, and now he’s the headlining comedian.  His material and persona (His real name is Dan Whitney.  Larry the Cable Guy is a character he created for the stage) are so locked in that he makes you believe that he’s really that guy on and off stage.  I think it’s genius the way he “dumbs down” his act.  It seems so simple, yet it’s so clever.  I thought he was hilarious.

The most surprising thing to me was the order that the talent appeared.  After Larry left the stage, Eddie Money was introduced and he closed the show.  I did not expect this.  I don’t know if it was the best idea either.  Those who came specifically to see Jeff and Larry left the amphitheater during Eddie Money’s set.  I never like when people don’t stay for the whole show, but I suppose they saw what they came to see, so they felt no reason to stay.

I thought those who did remain for the show’s entirety really enjoyed Eddie’s performance. Money shared with the audience that he was recording the show.  He mentioned that he wanted his family to be able to hear the performance.  Eddie played all of his hits like, “Two Tickets to Paradise” and “Take Me Home Tonight”.  I wish more had stayed, but it was still a fun way to end the night.

I thought the atmosphere was great.  People seemed to be having a great time either laughing or rocking out.  There were barbeque options throughout the amphitheater concourse as well as fun games that you might find at a family BBQ.  It was an excellent way to spend a summer evening!