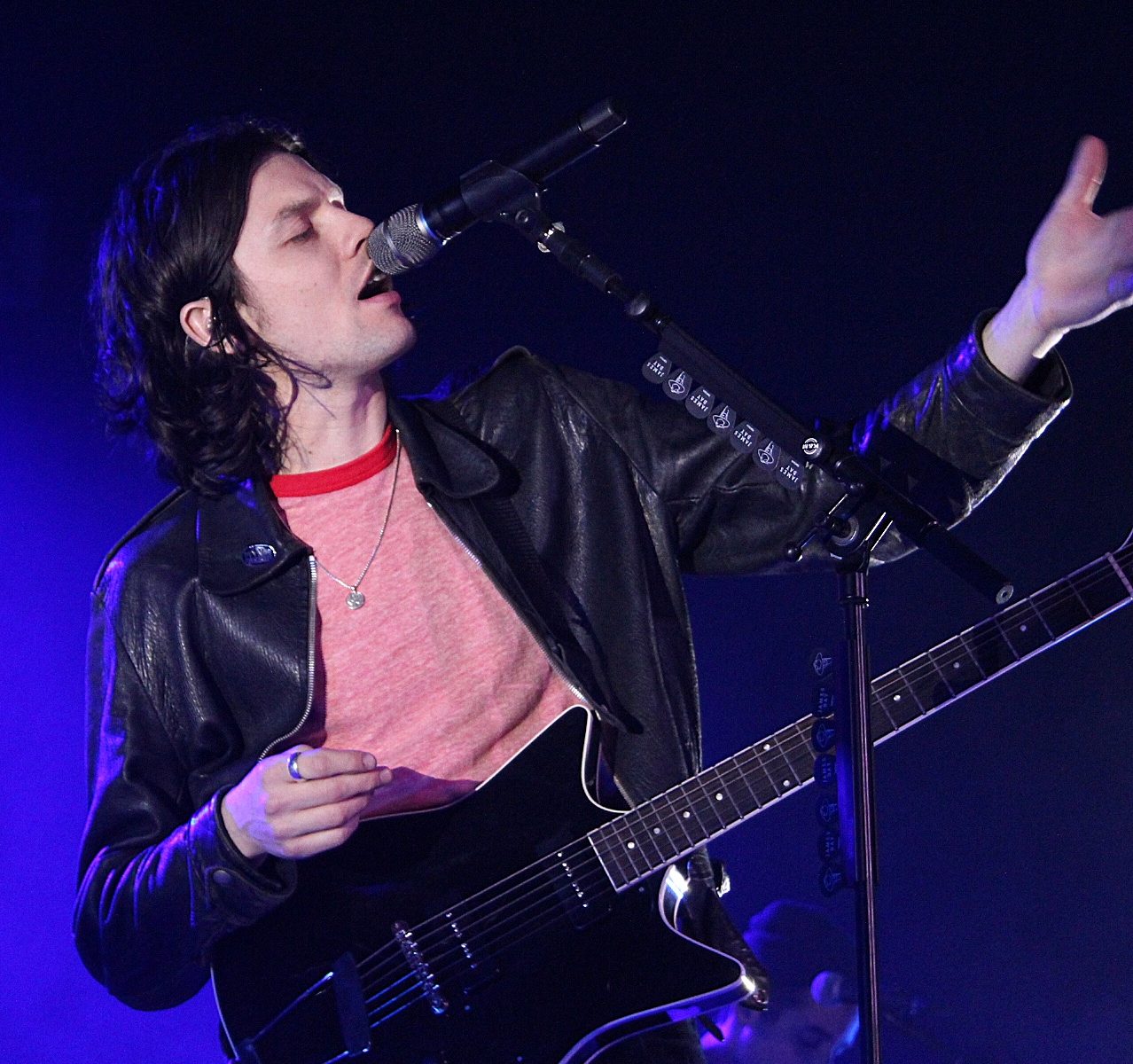 James Bay was originally scheduled to play Salt Lake City back in October.  But for reasons that were unclear, he had to reschedule the U.S. leg of his Electric Light fall tour until this spring.  After a long winter filled with anticipation, James made his Utah visit on Saturday night at The Union.

One perk of Bay rescheduling was he was able to bring up and coming singer-songwriter, Noah Kahan, with him on this tour.  Noah has a couple of international hits, “Young Blood” and “Hurt Somebody”, which were both warmly received. He introduced his new single “Mess” to the audience and it appeared as if they already knew the song. I noticed a lot of people singing the words.  Judging by the way the audience reacted towards Noah Kahan I knew we were in for a great night. The crowd cheered, clapped and sang as if Noah was the headliner. It was noticeable that Kahan was pretty fired up about the crowd reaction, calling them the “Dopest crowd ever!”.

With about a half hour in between Noah and James, I got to talk to a few fans along the railing near the stage.  They told me that they had been in line all day and that it was totally worth it to be that close to James Bay.  I’ll take their word for it. That seems like such a long day. But I get it, there’s nothing like being up close watching an artist you love.  I spoke to a security guard for a few minutes as well. I asked him if he enjoyed his job, and if he ever gets to see bands that he likes or is it mostly stuff he’s not really into.  He mentioned that he’s worked a number of shows of bands he likes but most of the shows were bands he doesn’t know or like. He said the silver lining about working a show like this is there are a lot of ladies in the audience which makes watching more enjoyable.  I had to laugh. I guess if you’re not into the music, I suppose it’s helpful to have a crowd you enjoy looking at. He was not wrong though, it was very much a female dominated crowd.

Because I go to so many shows, I never go into a venue without earplugs.  Otherwise, I’d be deaf already! However, for the first time, when James Bay walked on stage, they did not work.  The audience was that loud! It was almost impossible to hear the opening riff to “Pink Lemonade” a song from Bay’s latest album Electric Light.  Equally as deafening was the sing along to the chorus.  This audience had been waiting for an additional four months to see Jame Bay and it was clear they were ready to finally let it all out.   While playing his third song “Just For Tonight” a guitar pick fell from James’ hand to the gap between the stage and the railing where the audience was.  It just so happened that I was in that gap taking pictures. Following the third song, I’m expected to leave that area and join the rest of the audience. As I was walking out a fan grabbed me and pleaded with me to give her the pick that had fallen unbeknownst to me to my feet.  I looked for it while this fan was begging for me to find it with the desperation of needing antivenom following a snake bite. I looked as diligently as I could, but it was dark down there and there was no way I was going to find it. I was also about five seconds away from having security coming over to escort me out of the now restricted area.  I looked at the woman, apologized and told her I needed to leave the area. She put her hand on my shoulder and made deep eye contact with me and said “Don’t apologize. Thank you so much for looking. I’ll never forget it.” Wow. Things got pretty intense there in the front row of a James Bay concert.

To be honest, I wasn’t well versed in the James Bay cataloge.  I knew his biggest hits, I knew he’s British and I knew he played the guitar.  That was about it. I thought, ‘If I just listen to the way the audience reacts to each song I’ll know which are the crowd favorites.’  That is a strategy that usually works for me. Here’s the thing though, this audience went wild for every song. It was impossible to know if a song was a single, or an album track.  It was crazy. There was no let down the entire set. At first I was frustrated because I didn’t know how I would write about the highlight songs. But then I was just impressed that he had so many songs on just two albums that his fans were so excited about.  That says a lot about Bay’s song cataloge, as well as how devoted his fans are.

I was impressed with Bay’s vocals.  The guy can really sing. But I think the thing I was most impressed by was his guitar playing.  His music is listed as “Alternative”. It definitely fits that styling, but there is a real pop sentiment to his music as well.  Sometimes that can give an artist a bad wrap. To me, there is nothing like a good pop song. Emphasis on the good. There are a lot of bad songs out there, but when it’s good, it’s really good!  And Bay has some great pop . That being said, his guitar playing is way beyond what I expected. He’s an exceptional guitarist.

One of the many favorites was as song Bay released as a duet with Julia Michaels, “Peer Pressure”.  Coincidently, Noah Kahan also released a duet with Julia, his hit “Hurt Somebody”. Wouldn’t it have been so cool if Michaels was also on this tour so she could have done these duets with James and Noah?  Maybe we’ll see that one day.

As I mentioned it was a female-dominated audience.  If I had to guess (Which for the record, I’m terrible at.) The audience ranged from middle school to college-aged. Usually, when you get a crowd in that age range you don’t get a lot of older fans. But during one segment of the I walked upstairs to the 21+ section of The Union and it was totally packed. Generally speaking, a 21+ section is usually much older than a bunch of 21 year olds.  This was no exception. I was impressed with the age range that Jame Bay drew to his show.

During the concet Bay suggested that this might have been the best crowd on his tour.  This delighted the Utah audience and they seemed determined to assure themselves of that title.  James mentioned few times how amazing this audience was. Towards the end of the main set he stated “We came to Salt Lake City a couple of years ago, and it was great.  But it was nothing like this!”. I believe him. There is no way that audience was as rabid as this one. It was one of the first nice weather days this year in Utah. I honestly think that had something to do with it.  I think something happens to where we’re just so stoked to not be freezing for once. Top that with going to see one of your favorite artists and you’re going to feel free to really get into it. By the midway point of the show the inside of The Union felt like Miami in August.

One of my favorite moments was when James sang the last song of his main set, “Best Fake Smile”.  I enjoy that song and enjoyed it live even more. The song welcomes naturally singing and clapping along. There was just a special energy to the song and the moment stood out to me. If I didn’t get why James was so beloved before this song (PS. I did), I knew it after he performed “Best Fake Smile”. James left and the audience roared for his return.  The volume never went down until he returned.

When James came back he addressed having to cancel his fall tour.  While still not getting specific about why he left us understanding that it was necessary.  He wanted to perform a brand new song titled “Bad”. As he lead into the song he said, “I know that more than ever before Salt Lake City’s got my back.”  The audience roared in the affirmative and James followed with “And I’ve got yours!”. He played his new song and it was really good. When I was heading to my car after the show I walked by a bunch of different groups and no joke, each one of them said something along the lines of “How about that song “Bad”?  I loved it! I hope we don’t have to wait too long for him to release it!”. I’m in agreement. I think Bay has his next hit.

As wild as the crowd had been, they had all saved up just enough energy for the final song of the night, Bay’s biggest hit “Hold Back The River”.  I fully expected the group next to me to spontaniously combust. They were totally freaking out.

I wondered if the show would have gone this way if James Bay had played his original date back in October.  Or did this crowd become so unhinged because they had to four extra months for him to play Utah? Either way, there is no way any other crowd on this tour will surpass what James on Saturday night at The Union.