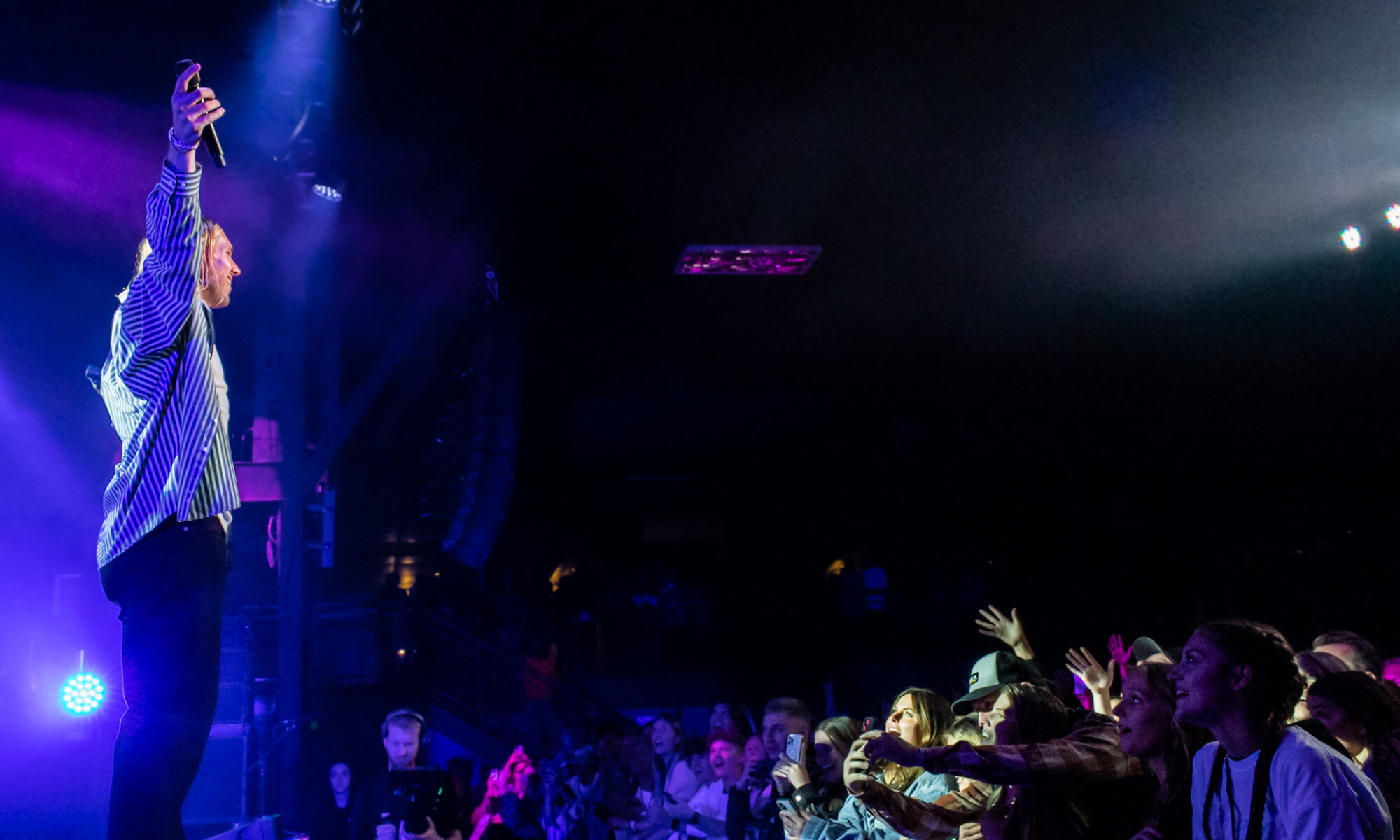 I got to the venue about an hour early. The line to get into the venue wrapped around the block! I was able to go inside while Jake Scott’s meet and greet was taking place. It was really fun to see his fans getting to meet him! They were so excited. Jake was happy to take photos with them, sign their VIP passes, and even took time to open gifts that a few people brought him! Following the meet and greet, Jake did a quick Q&A where a few people were chosen to ask him a question!

One of the questions he was asked was if his parents supported his pursuit of the music industry. He said, “Well, they’re right over there!” and his parents gave the group a wave. He continued by answering that they were very supportive, initially a little nervous, but supportive nonetheless! After the Q&A, Jake sang a sweet, unreleased, and not even officially named song inspired by his one year old daughter named Ruby.

When the “VIP” portion of the event was over, the doors opened for the main event. Some made their way in with ease, while others came in walking so fast they were basically running, letting out squeals of excitement along the way! It wasn’t long before the whole venue was packed full of fans eagerly anticipating the night ahead of them. While the majority of the crowd seemed to be teens and twenty-somethings, I saw a baby that couldn’t have been more than six months old, a good number of kids, and many parents as well! Pop hits from recent decades played over the speakers to fill the time before the show began. Everyone sang along to those songs loudly and joyfully!

Nineteen year old Brynn Cartelli opened up the night with her song, “Last Night’s Mascara.” Many knew the words and excitedly sang with her! It was just her and her guitar on stage, and her presence and music were powerful from the get go. Her voice was strong and clear, and the crowd loved her! They told her so many times, and she always returned the sentiment. The stage was illuminated with blue lights, and sometimes pink, too.  As I was taking photos I heard someone say, “I really like her!” and another said, “She is so good!” She played through songs like, “Gemini,” and, “Love You In My Mind”. Brynn sang a cover of Sam Smith’s song, “I’m Not The Only One”. And the whole audience sang along at the top of their lungs! She told stories of different life experiences that lead to her writing certain songs.

For the last song, “Girl Code,” she explained that that one was about her and her friend having a crush on the same guy and how they navigated that. Brynn was well received by the audience, they really did love her! I noticed two girls specifically that sang every single word of every song of Brynn’s. They were super fans for sure!

A few minutes later it was Rosie’s turn! From the second she stepped on the stage, you could tell she was so happy and honored to be there! She had a huge smile on her face before she even said or sang a word. The first song she sang was, “Sad, Sad, Sad.” She had a beautiful voice! The crowd loved her, too! It was so apparent by the cheering and enthusiasm that they gave off! Her band was just as cheery as she was. Her drummer’s name is Frankie, and she introduced her pianist as her best friend, brother, and manager, Matteo.

Rosie’s band was great at interacting with the audience. She worked the stage, making her way back and forth while giving smiles and waves to those in the crowd which was exciting for them! Rosie told everyone that during her time on stage, it was her goal to help people feel all of their feelings. Following her set, I heard people expressing their thankfulness for that!

The crowd was especially thrilled when she sang a cover of Miley Cyrus’ song, “The Climb.” They all sang along like they were performing their own concerts! Rosie sang her newest release, “Good for Me,” which just came out the week prior! It was a beautiful, peaceful song that was enhanced by her sweet tone of voice. At one point in her set, she asked the crowd to sing a part of the song. Rosie said that when they sang it that they should let go of whatever they’ve been going through. I thought that it was really nice that she was providing a space for people to let go of anything that was weighing them down! Rosie definitely left the stage well loved with all sorts of new fans from Salt Lake!

The lights went up for a bit, then they went back down again. Jake Scott’s band made their way onto the stage and music began to play. Screams broke out across the venue, and the fans went crazy when Jake got on stage! He was so full of energy that didn’t dwindle at all for the entire performance! Scott was constantly running back and forth across the stage. He did a great job interacting with his fans the entire time, which was impressive!

Every time he would wave or make eye contact with someone, or even just go to a certain area of the stage, that particular region in the sea of people would be even louder than the rest. It always makes me smile to see the reactions of concertgoers because I know that seeing your favorite artists live is one of the best feelings! Jake sang a song that he wrote with Russel Dickerson called, “She Likes It”. Everyone was extra pumped for that one!

During the song, “Like This,” everyone was jumping, dancings, and singing so loudly! He played a few “sad songs” in a row. Scott mentioned that these songs are usually inspired by the thought of his wife breaking up with him. Because all of his other songs are mostly inspired by her. He said, “You all know I’m obsessed with my wife, Rachel,” and everyone started chanting her name. Jake continued by explaining that the smell of lavender brings back the memories from when he was first falling in love with Rachel. So he named the tour the Lavender Tour. Not only did he name the tour Lavender, his upcoming album will share the name, and then he sang a song also with the same name!

Then Jake Scott sang a song called, “Working For You”. He said it was written after a discussion with a friend who had relapsed into addiction. It turned into a song about toxic relationships, and the lyrics and melody are so powerful! A few songs later, Jake said, “Where are my Swifties at?” and the crowd went wild! He sang Taylor Swift’s song, “All Too Well,” and the fans passionately yelled/sang the lyrics too! During Jake’s song, “Good Day,” the song was so upbeat and happy sounding that even the security guards were dancing and having a good time! Jake went into the crowd during that song and he said, “Salt Lake, y’all just do it different here”! He didn’t make it far into the crowd because people rushed to the front! He played the song, “Tuesdays,” that he said many people have used for engagements!

Jake Scott, along with Brynn Cartelli and Rosie, brought a night of joy, talent, and wonderful music to the Union! Even in between sets, people were having a great time, so there was truly never a dull moment! The Lavender Tour’s stop in Salt Lake City provided so many people with lasting happy memories!