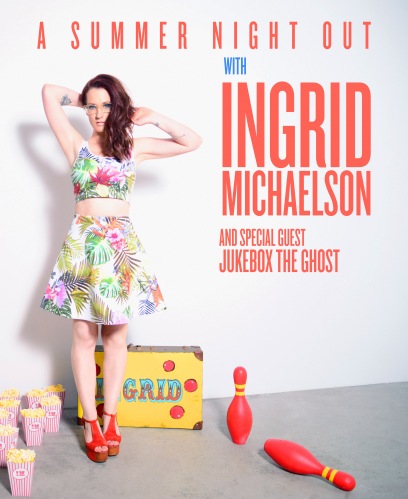 The first time I saw Ingrid Michaelson was about five years ago when she was the opening act at the Greek Theater in Los Angeles.  I knew maybe 2 of her songs, and that’s about it.  But with her voice, her songs, and her personality, she won over me and the rest of the L.A. crowd.  This is not an easy task to accomplish.  Especially as an opener, and especially in front of a tough L.A. audience that is generally unimpressed and unaware of opening acts.

Well fast forward to this past Friday night, June 19, Ingrid brought her A Summer Night Out Tour to The Complex right here in Salt Lake City.  Now what The Complex may lack in personality, it makes up for it in size and sound.  The Complex is basically a huge warehouse turned into a concert venue.  But because of this, it can bring in some really great bands that might not fill an arena, but still need a lot of space for their fans.  And while I expected this type of venue to have a horrible echo, or poor sound, I was really impressed with the sound in there.  Either the building was built to have solid acoustics, or the necessary accommodations were made for quality sound.  Either way, I tip my hat, because the sound was solid.

Before I get to Ingrid, I want to quickly mention her opening acts.  As I was walking in, Greg Holden was about halfway through his set.  I thought he had some good songs, a nice singing voice, and a lot of emotion.  And the ladies seemed to really like him.  Jukebox the Ghost followed Greg, and they put on a great opening set.  Full of energy, and even giving the crowd a fun cover of Queen’s “Somebody to Love”.  I was really impressed with them, and I look forward following their career progression.

The time came for Ms. Michaelson to take the stage.  She makes it impossible to not fall in love with her.  Her voice is amazing, she’s hilarious, she has complete command of the stage, and the audience, and of course, she’s extremely easy on the eyes.  Her personality is so fun that I’d swear we would be good friends if we were ever to meet.  But I have a feeling the thousands of others in the sold out Complex felt the same way.  Not to mention all of her other fans on the rest of her tour.  Her band seems to really like performing with her, and It adds to the atmosphere of the show.  I bet they are having a blast on this tour.

Ingrid mentioned that her and the band knew they were in for a great show, because Salt Lake City crowds are always so into it and crazy. Of course we all ate that up.  But as I’ve mentioned before, this is something a lot of bands passing through will bring up.  And it would seem that they might say this everywhere, but I’ve been to enough concerts in different states to see that it’s not something bands always say.  Utah is a special place to see a concert, and I love it when the artists recognize that.  A couple few of Ingrid’s band mates dropped their jaws when during some crowd sing a longs,  the audience harmonized.  I doubt many other towns do that!

Ingrid ran through her catalogue of songs for what seemed to be about an 80% female audience, balancing the old and new, andsinging them all with such purpose and care.  I love it when an artist will sing a song they’ve done a million times, yet make it feel as fresh and new as ever.  Ingrid is very skilled at this craft!

There were a number of special moments in the show.  One in particular is when Ingrid did her amazing cover of “Can’t Help Falling In Love”, made famous by the King himself, Elvis Presley.  She’s done this cover many times, but it blows me away, one, that she still sings it as with her own songs, with such a sincerity that makes it feel as if she’s covering it for the first time, and two, that she can captivate a lively crowd into either singing along, or sitting there quietly mesmerized.

I’ve already mentioned Ingrid’s voice, but I don’t think I can say enough about it!  She hits these high notes that are as clear as a chime, yet soft and smooth as the first ripple you see after skipping a rock in a glassy lake.  And yet, her voice is so rich and full of soul that it’s almost unfair that she has this many gifts in one voice.  I could listen to her sing all day long.  The old saying, “She could sing me the phone book, and I’d love it!”, doesn’t really apply these days because seriously, who uses a phone book anymore.  Plus I’d feel like she’d be wasting her gift on singing me the local plumber or pizza guys contact info.  But if she said, “Hey, I want to sing to you while I play my Ukulele allday long.”, I’d be cool with that.

The show finished with a really fun cover of Icona Pop’s “I Love It”.  The crowd was dancing, and it was a perfect end to a perfect set.  I really hope to see her again soon!

When I mentioned I was going to see Ingrid Michaelson to some of my male friends, I got about the same response, “I’ve heard of her, but I don’t really listen to many girl groups, or girl singers, it’s just not my thing.”  I must say I feel really bad for these guys.  They are missing out on so many great songs, and so many beautiful voices that come from so many of the great female artists, not only from today, and there is astrong group of female artists today, but from the great female bands and singers throughout history.  It’s disappointing to see so many limit themselves with such a “I’m too much of a guys guy”sentiment, and what I think is a close minded thought.  So get out there, check out some female artists that you may not have normally looked at.  You may be surprised at the gems you’ll find.