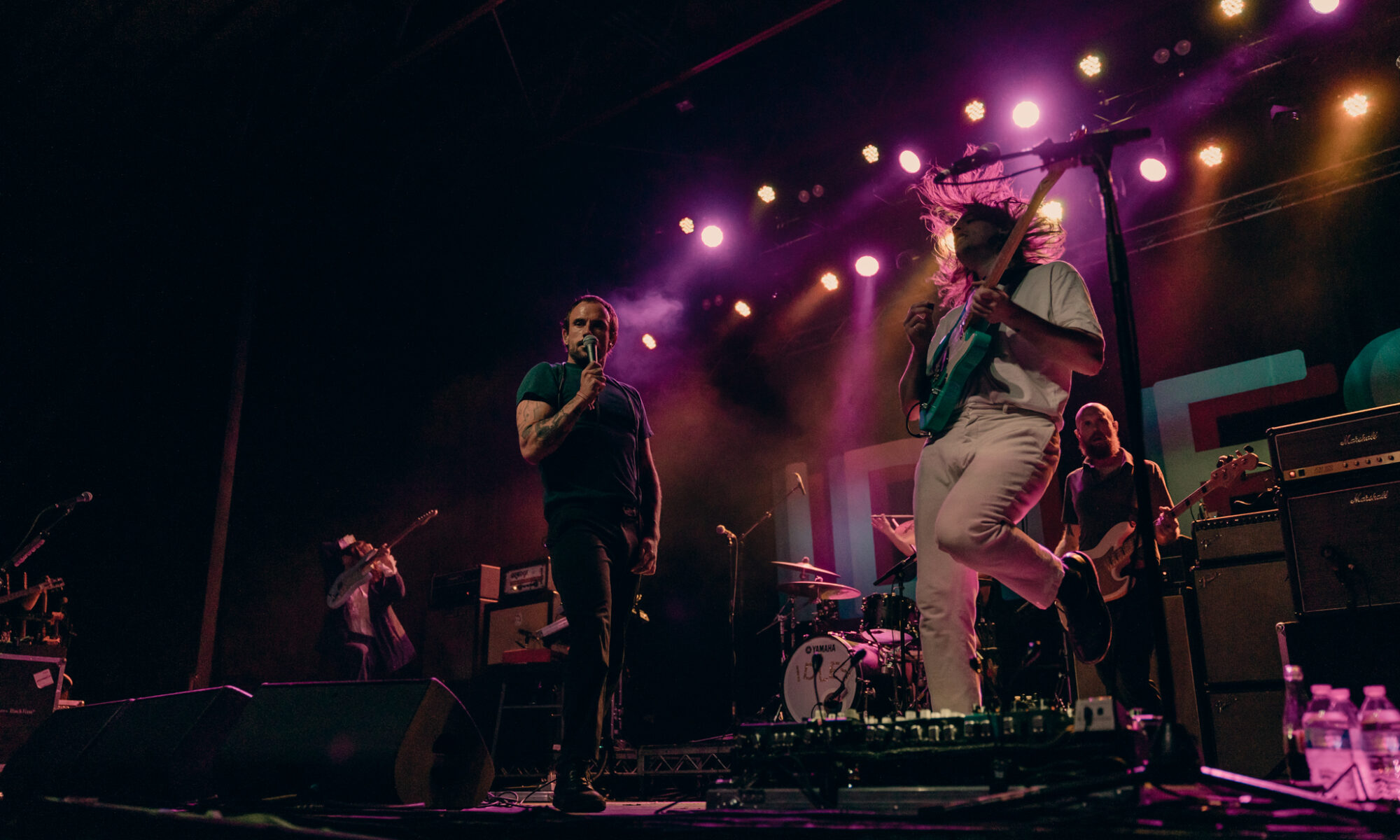 On April 20th, IDLES visited The Complex for a show in between Coachella sets and rocked the house! Upon arrival, I noticed the crowd was very chill compared to other events. They seemed to be there just for a good time. Not a lot of hurry to get to the front of the crowd or save spots. Although it was a big room, The Complex began to fill up very quickly.

When the opener came out at around 8, the room was more than half full. The opening set was a band named Automatic. Upon entering the stage they announced this was the last time they were opening for IDLES on this tour. They began to play and everyone was clearly into it. They played their most popular song “Too Much Money”, and the crowd reacted with extreme excitement. It could possibly have been because it was the last song before IDLES. Either way, there was a lot of energy all at once. Automatic was pretty relaxed throughout their set until the last song.

In between sets I had the opportunity to explore the venue for a moment. I went to the other side and checked out the merchandise tables they had set up and talked to a few security guards about the concert. They were very friendly and helped me by letting me know IDLES would be entering the stage 15 minutes earlier than planned. I was so happy they told me, or I would have missed the photo opportunity. As someone who loves concerts but doesn’t smoke, I appreciated the venue creating an area outside designated for smoking. I hadn’t seen this before and was very happy that I wasn’t drowning in the smell of cigarettes while enjoying the show.

I also felt the crowd was very considerate of each other. Some rock concerts get a little too wild and aggressive. However, this show seemed to find a balance between being crazy, having fun, and making sure everyone there was able to enjoy the show. I even saw a couple bring their two children to the concert in the front row. The kids were probably 6-10 years old. The crowd seemed to help make sure the children were safe and had a good time. The venue had good quality sound and an overall good show experience. They controlled the crowd very well right before IDLES came out.

It was a little different when IDLES came onto the stage. They didn’t have music playing or a grand entrance. They simply walked onto the stage and picked up their instruments. The lead singer, Joe Talbot, began to jump up and down with the drums. As the drum became louder, the guitars came in. This build-up lead to their opening song and created a surge of excitement from the crowd. I was having trouble realizing when they switched from one song to the next. But it was cool to see them transition each song without stopping the music.

As they played a song from their newest album titled Car Crash, they changed the pre-chorus to accommodate crowd interaction. Joe Talbot told the crowd to split down the middle. Then as the extended pre-chorus ended, they all ran into the middle and began jumping. Towards the end of the song the guitarist, Jon Harper, jumped down off the stage and began playing the guitar in the crowd. I had never seen a band do this, so it was very cool to watch such an intimate crowd interaction at a concert.

As he was playing in the crowd, I noticed a photographer taking a picture with his flash over the crowd. As he pulled his camera back down I recognized him to be Adam Degross, Post Malone’s personal photographer. It was really cool to see him shooting at this concert.

As Jon got back onto the stage and made sure his guitar was in tune still, he began jumping and flipping his hair. Joe Talbot fed off this energy and ran to the front of the stage. He leaned over into the crowd and began screaming the lyrics to the song. The whole audience was banging their heads to the beat as the drums became louder and louder.

Towards the end of the concert, it seemed the band was becoming a little tired. They weren’t quite as mobile on the stage. But then as they reached the last two songs, they picked the energy back up and finished it off with a great performance. Overall, if you like rock music, you would enjoy an IDLES show. They are a little harder than some other bands, so it definitely would take a certain type of person to enjoy. They bring a lot to the stage when they play.