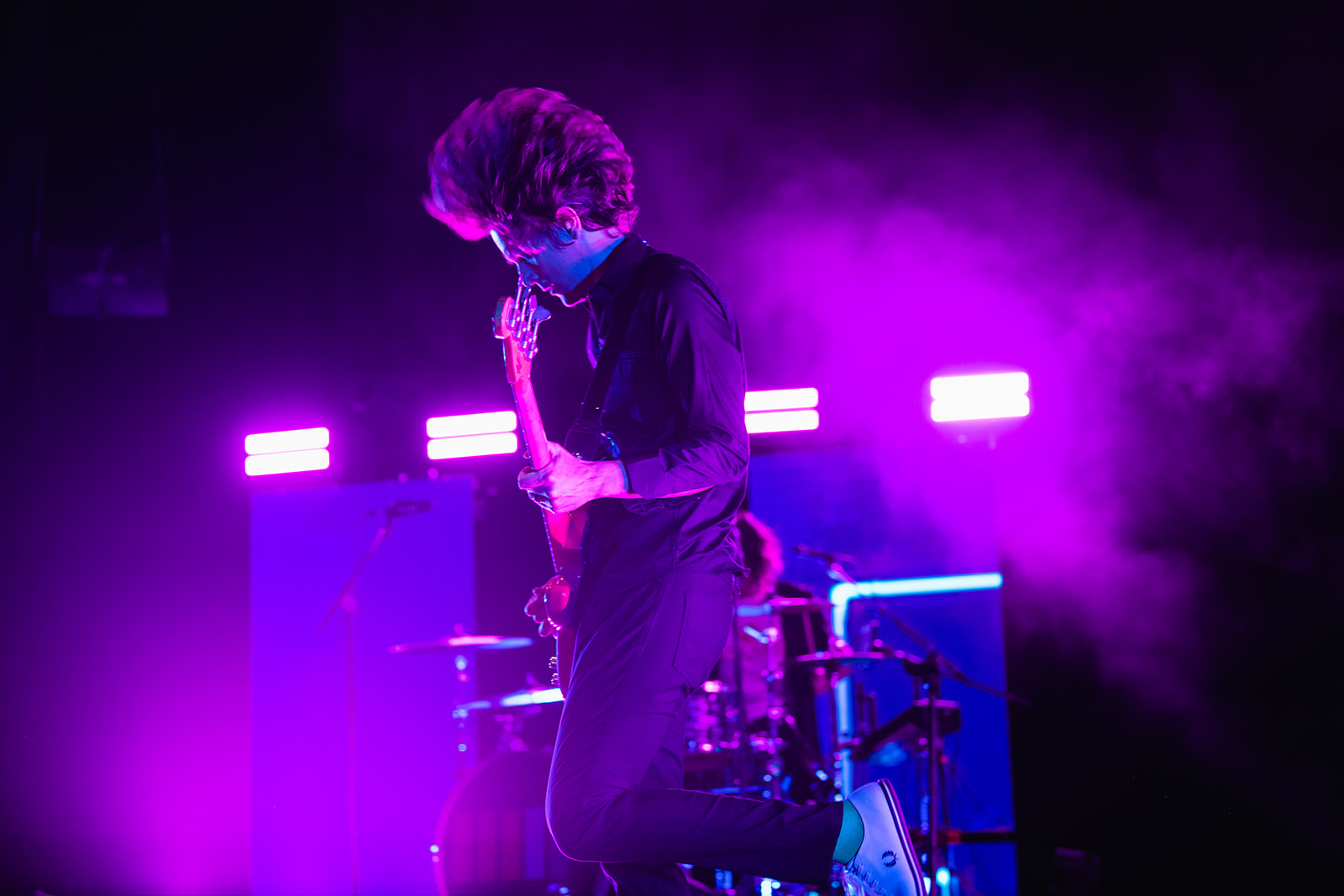 I Dont Know How But They Found Me (iDKHOW) & Joywave w/ Savannah Conley• September 3, 2022• Sandy Amphitheater

On Saturday, September 3rd, Salt Lake City’s own alternative pop rock band, I Dont Know How But They Found Me (iDKHOW), brought their “Welcome to Hellvetica” tour home to Utah. Co-headliner Joywave joined them, putting on an exciting show at the Sandy Amphitheater. Knowing that iDKHOW originated in Utah, I had anticipated a solid turnout for their hometown concert. I was surprised to see that the crowd was not as large in numbers as I had expected. I suspect the fact that both bands have already performed separate concerts in Utah earlier this year may have had something to do with the lower attendance. Although the crowd may have been small in numbers, the fans there brought big energy.

The night started with Nashville native singer-songwriter Savannah Conley. The talented new artist played a set that blended folk and pop with just a touch of country. I found Savannah’s stage presence quite charming as she interacted with the audience and fellow musicians on stage. As she played through songs from her latest EP, Best I Can, I was reminded of a band I love, The Head and The Heart. I found out later that The Head And The Heart is just one name on an impressive list of artists that Savannah has performed as support for.

Also included on that list are Brandi Carlile, Willie Nelson, and Ben Folds.  I can honestly say that it’s not very often that I am as impressed with an opener as I was with a Savannah Conley. With her talent level, I don’t expect it will take long for her to return to Utah as a headliner. When that day comes, I plan to be there.

Next to take the stage was Rochester, New York’s alternative band Joywave. Before the artists even stepped out, the unique setup captured the crowd’s attention. The back end of a Chevy Corvette was parked in the center, in front of a large screen. The car’s bumper was complete with a Utah license plate that read “JOYWAVE.” Daniel Armbruster (vocals), Joseph Morinelli (guitar), and Paul Brenner (drums) appeared on stage wearing matching car wash attendant jumpsuits. The car wash theme went along with their most recent album Cleanse, which was released earlier this year.

The quirky band entertained the crowd with their hour-long set that was a mix of indie rock and synth-pop. As they began their first song, “Coming Apart”, lead singer Daniel Armbruster bounced around the stage. Rarely staying still for more than a second. While I enjoyed his enthusiastic energy, I must admit I was completely worn out after trying to keep up with him, camera in hand, during the first three songs I got to photograph. How he managed to keep that same level of energy through their entire performance was something I was both amazed by and envious of.

The crowd enjoyed singing along with the band as they played some of their older songs, “Tongues,” “Somebody New,” and “Traveling at the Speed of Light.” Their newer songs, “Buy American,” “Pray For The Reboot,” and “Ugly Ending,” were received with just as much love.  Between songs, Daniel entertained the crowd with his playful personality. At one point, he told the crowd that he would join iDKHOW on stage later in the evening. Wanting to have a little fun and play a joke on iDKHOW, he told everyone to boo him as loud as they could instead of cheering upon his arrival. “I want the loudest boo the world has ever heard. I want him to be so concerned for my safety here in Salt Lake City that he thinks he’s made a huge mistake in doing the show here tonight. Ok?”

I enjoyed his sense of humor and was looking forward to seeing how the surprise booing played out.

Near the end of the set, Daniel explained that they would be playing a song they had only recently started performing at concerts. “There is a song that we are well known for that we didn’t use to play pre-pandemic because we used to be a bunch of jerks. But during the pandemic, they sent humans back into space as part of one of the Space X missions, and they played this song in outer space. And I said if they are playing it in space, we should certainly play it in Salt Lake City.” The audience was thrilled as they began to play their 2013 hit “Dangerous.” They ended their portion of the night with their high-energy song “Destruction,” leaving the crowd excited and ready for iDKHOW.

The year was 1985. Leaning against the DeLorean in the middle of the parking lot at the Twin Pines Mall, Doc Brown noticed the Libyans quickly approaching. Shocked and panicked, he said to Marty McFly, “Oh my God. They found me. I don’t know how, but they found me.” Thirty-one years later, in Salt Lake City, Utah, Dallon Weekes, a former member of Panic! at The Disco, and Ryan Seaman would name their new band after that very line.

Eager to please their hometown fans, iDKHOW began with one of their most popular songs, “Choke.” The fan-favorite got the crowd on their feet and dancing. Which is how they would stay for the remainder of the concert. Dallon Weekes addressed them and said how good it was to be home. He also mentioned he would need their help singing as he was having a bit of a “spat” with mother nature and was struggling with his voice. His fans were happy to help and sang along. He complimented their vocal assistance, jokingly saying, “you could show the Tabernacle Choir a thing or two.”

If he was having any problems singing, he hid it well. I thought he did an excellent job and was impressed with his talent. “Clusterhug,” “Leave Me Alone,” “New Invention,” and “Do It All The Time” stood out to me as songs that got the crowd extra excited.

Halfway through their set, Dallon told the crowd they would dust off an old song and play one they hadn’t played in a while. Someone then yelled out that old concert joke, “Play Freebird!”. Dallon played along, singing “If I leave here tomorrow,” the first line of the Lynyrd Skynyrd song. He then joked back with the fan who requested it, “Don’t be that guy. Don’t be the guy who requests Free Bird or who plays it. Let’s play one called ‘Light’s Go Down’ instead.”

While a Lynyrd Skynyrd cover was not in the cards for the evening, they did have a Belinda Carlisle cover planned for the crowd. The audience loved hearing them play “Heaven Is A Place On Earth”. A song Dallon said he remembers hearing his mom play while they cleaned the house on Saturday mornings as a kid. I am sure his mom, who was in attendance, loved hearing him cover the song. Dallon’s mom was not his only special guest there that night. He took a minute to recognize his wife and kids and tell them how much he loved them.

As the night was close to ending, they began to play “Nobody Likes the Opening Band”. A fun song with catchy tongue-in-cheek lyrics. During this moment, he invited Daniel Armbruster back on the stage. To Dallon’s surprise, Daniel was greeted with the loud booing he had secretly requested earlier. Dallon caught on quickly to what must have happened, and it ended up being a fun moment for everyone.

Instead of walking off stage only to return a moment later for an encore, Dallon said they would skip the “weird adult game of hide and seek, the grown-up version of peek a boo.” Instead, he said they would stay on stage and play their last couple of songs, “Do It All The Time” and “Kiss Goodnight”. Personally, I enjoy an encore. Even if they have become some planned-out silly expectation, and it felt strange to end without one. Standard encore or not, the concert ended with incredible energy, and the crowd loved every moment of the night.