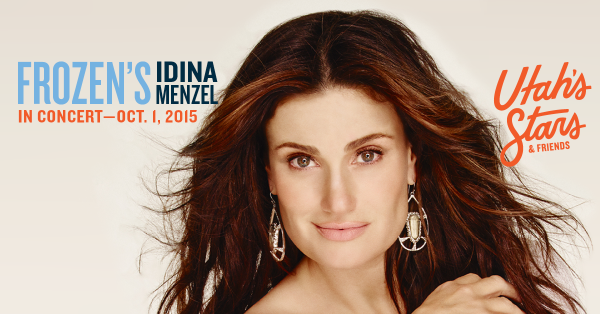 Quick! Name the first ten Broadway stars that come to your mind! Ok, the first five! Eh, how about one?  Now for you theater lovers, that may have been a fairly simple task, but for you others out there, you blew it!  And you’re missing out on some pretty fantastic voices. Anyway, even if you’re not a fan of musical theater, you may recognize the name Idina Menzel.  And even if that name doesn’t yet ring a bell, you’ll surely recognize her first professional job as one of the stars of arguably the biggest musical of the 90’s, the award winning musical “Rent”, where she was nominated for a Tony Award portraying the role of Maureen.  Unfamiliar with that show?  Well, first off, I just feel sorry for you, but perhaps you’ll recognize Idina from the unquestioned biggest musical of the 2000’s, “Wicked”, where she won a Tony Award for portraying the role of Elphaba, The Wicked Witch of the West.  And if you still don’t know her, then there is no doubt that you’ll recognize her as the voice of Elsa in the humungous Disney animated feature film “Frozen”, singing the Academy Award winning song “Let it Go”.  So, if you still aren’t familiar, one, you’ve been living in the wilderness somewhere with no contact to the world, and two,  I’m sure you can at least see for the past 25 years she has been busy being featured in one successful endeavour after another.  And here she was right of front of me in Orem, Utah of all places!

So, I’m a sucker for singers, especially when they have a unique recognizable quality to their voice.  To me, there is nothing better than hearing that first note, that first word, and knowing unquestionably who is singing.  And that applies to Ms. Menzel.  The musical “Wicked” has been playing on Broadway for about a decade now, and there have been a lot of actresses who have played Elphaba in New York, London, and on tour.  But you will never mistake any of those voices (as amazing as some of them are) for Idina’s when you hear her sing “Defying Gravity”, or “The Wizard and I”!  She has ownership of these songs, and always will.

Idina began her show with guns blazing, singing the aforementioned “Defying Gravity”.  What a way to start a concert.  Of course she had the full attention of the crowd, and she heard their excitement and approval when she finished the song with one of her signature belted notes.  I remember thinking to myself, ‘I just heard Idina (possibly an expletive) Menzel sing “Defying Gravity”!  I quickly realized I was in for a night I would not soon forget.

She soared through the show performing standards, made famous by legendary female vocalists, all the while talking with the crowd, and displaying her fun and straightforward personality. The beautiful thing about watching Idina perform is when you look at her, it seems as if each she puts so much feeling and purpose in each word and note.  I almost get worried that she won’t be able to hit her big notes because of the energy she’s putting into performance.  But she’s a true professional.  She knows what she’s doing.

A huge highlight for me was when she covered Radiohead’s “Creep”.  I know a lot of artists are covering that song these days, but not like this.  Not with the passion, the angst, the depth, or the authenticity that Idina performed it.  I mean, wow, I was so moved by her performance of this song.  And I figure, since Radiohead never performs it, why not Idina.

Following a roaring ovation from the 6,000 plus audience she completely changed the tone of the show jumping to one of her signature songs and probably the first song she’s known for, “Take Me or Leave Me”.  A song she dueted in the musical “Rent”.  The crowd went crazy upon recognition of the song.  But the fun was not over.  After singing a verse or two, she decided that since the song was originally a duet, she asked for some assistance from members of the audience.  She asked who knew the song and then walked up to a couple people.  The first was a young man who had clearly been practicing his whole life for this moment!  When she gave him the microphone he was off and running.  He sounded good, and hit all the high notes. Impressive.  Then she found a girl who said she knew the song, but kinda stumbled through her part and Idina had some fun with her, but it was clear she was looking for someone who knew the song a little better.  Then she found another woman who knew the part well and sang through the duet almost flawlessly.  Then she brought the young man and the woman who knew the part on stage with her to finish the song.  It was a really high energy part of the show, and while I looked out on the crowd I don’t think I saw a single person without a smile on their face.  That’s what a live performance is all about, giving a crowd a show, and a memory they’ll be talking about whenever that artist’s name comes up.

As if she couldn’t do any more to engage and emotionally move the audience, she again switched tones singing an excellently arranged version of “No Day But Today” also from Rent.  Before she sang she dedicated the song to Jonathan Larson, the composer and lyricist of “Rent”, who passed away the day before his groundbreaking show was to open.  She talked about living in the moment, which was ironic as thousands of smartphones were out filming her.  But the song was moving and powerful, and inspiring.  She finished the song by again involving the audience having the entire crowd sing the end of the song with her.  And that’s one thing about concerts in Utah, the crowd is always up for a sing along.  And generally they sound great.  This time was no exception.

She set up the later part of her set by singing an acapella version of the song “For Good” from Wicked. Now singing acapella is a challenge in itself in a concert setting.  But the UCCU Center has let’s say, not the best acoustics.  Which reminds me, kudos to the sound engineers, because they did a remarkable job with the sound.  And to that, Idina sang this beautiful song flawlessly in her personal tender way.

The clear cut crowning moment of the evening was when she finished her main set with the wildly popular “Let it Go” from the Disney movie “Frozen”.  Again, children and adults alike went nuts when they heard the opening chords to the song.  She sang the song brilliantly, and then she again amazed, entertained, and enhanced the show by inviting all the children in the audience to come up to the front of the stage to show the grown ups how it’s done.  A large applause took place when a little girl sat next to Idina dressed in a complete Elsa costume.   It was cute, it again, brought smiles to everyone, and it made her look like a modern day Maria Von Trapp.  On Julie Andrew’s 80th Birthday no less!  She let kids sing into the microphone, and the crowd cheered loudest when one of, if not the only boy sang the famous tag line, “The cold never bothered me anyway.”  They sang through the chorus a few times and then she sent them all to their seats finishing the song on her own, and yes she hit that high note perfectly!

She left the stage, returning to sing “Somewhere Over The Rainbow”, in her own unique, personal style.  And then she departed to a standing ovation.  Of course.

I’ve listened to Idina Menzel albums, cast albums, I’ve watched her on TV singing her biggest songs on award shows, I’ve watched the dvd, “Chess in Concert”, I’ve watched her on Youtube singing “Don’t cry for me Argentina” about a billion times.  Okay, maybe a million, but if you haven’t seen it, it’s probably my favorite version.  And now, finally, I’ve seen her perform in person.  A huge check off of my list of performers I’d like to see.  She did not disappoint in any way.  I could not recommend seeing her enough.  Even if you’re not familiar with who she is, or don’t like musical theater.  Just go see her and you’ll be thanking me for the experience.

Don’t Rain on My Parade (From Funny Girl)

Take Me or Leave Me (From “Rent” & performed with audience members)

No Day But Today (From “Rent”)

Always Starting Over (From “If/Then”)

For Good (A cappella)

Let It Go (From Frozen)