I love hearing that a concert has sold out. Of course, unless, I don’t have tickets.  But, It doesn’t matter if to me if it’s at USANA Amphitheater or at The Urban Lounge, to sell out a venue is always an impressive thing.  I’m probably more impressed when an artist sells out a show on their first visit to a city. Such was the case with Harry Hudson.  He closed out his first national tour with a sold-out show at Kilby Court.

I love Kilby Court.  Yes, it’s small, it’s dark, and unless you’re in the first few rows, you can’t really see the stage.  But I think it’s the perfect venue.  This place could not have more character.  I think of it as Salt Lake City’s “Rite of passage” venue. It’s the venue you’re proud to have seen a band because you saw them as their career was taking off. “Oh yeah, I remember seeing them at Kilby Court!”  instantly gives you credibility as a legitimate fan of a band. And nothing sounds sweeter than seeing an artist at The Complex, or Vivint Arena state “How many of you were there the first time we played Utah? I think it was at a place called Kilby Court?” Of course, way more people cheer for that than were actually there.   I think they’re probably cheering that the artist remembers Kilby Court than were actually there at their first show. So I was really excited to see Harry Hudson at Kilby Court because he’s definitely an artist on the rise.

Just before the concert starting, I had the opportunity to be standing between Harry Hudson’s tour bus, and the backstage door.  I would be following Hudson into the venue to take pictures on the side of the stage. I could hear the audience screaming, “Harry! Harry! Harry!”.  There’s no way he didn’t hear that because he walked out of that bus like a boxer fired up to hit the ring. It was clear right away that Hudson has a real love for what he does.  He engaged with the crowd immediately as he walked out to the intro of the opening song on his debut album Yesterday’s Tomorrow Night, “The Legend of the Yellow Road”.  The capacity crowd was right there with him, singing every single word.  I’m pretty sure everyone there knew every word of every song in the set. Performing in a place you’ve never been, and having the show sell out, and then having everyone there know all the lyrics to your songs has to be one of the best feelings in the world.

Harry told everyone that this might be the loudest crowd he’s ever played for, which of course increased the decibel level inside Kilby Court.  He told us that there were to be no strangers at this show. So he asked us to look for someone we didn’t know and introduce ourselves. I was in the fortunate position to meet Harry’s mother.  We shook hands and I just told her, ‘This must be so cool! Your son is very talented.’ She thanked me and stated that she was proud of him. Then on the other side of me was Hudson’s drummer. (Kilby Court is so small and the stage is so low that yes, I was standing right next to the drum kit, but was also completely off stage.) He extended his hand and said, “Hi, I’m Derek.”  I introduced myself and quickly asked him, ‘How awesome is this?!’ He replied, “I love it!”. Talk about being in the right place at the right time. They were so friendly to me and seemed to be loving the moment Harry created.

I found it refreshing how open and honest Hudson was with his fans.  He told us that the song “Kelsey” was written about a former girlfriend that he admitted to cheating on.  He was contrite in his admission and asked the audience to know that he’s still learning and growing.  They were forgiving in their reply and I think they appreciated his candor.

Hudson’s zest for life became that much more clear when he shared that he was diagnosed with cancer five years ago.  He encouraged his audience to Work hard”. No matter what they want to do, if they want to do it, to just work hard at it.  He followed with “Laugh a lot” and “Dance a lot”. He shared with us that he wrote the song “Hell to the Stars” while he was going through chemotherapy.  It was a special moment in the show.

Things grew more intimate still when he shared with us that his father had passed away earlier in the year.  He said he had his father to thank for pursuing a career in music. His dad told him “Singers sing. So go sing!” Then before he performed the song “Love, Dad”, he asked the crowd if they’d yell out “We love you pops!”.  The audience, of course, complied with Hudson’s heartfelt request.

There were several moments throughout the evening where Harry Hudson stated that this was the “best night of my life”, or “this is the best crowd on the tour”.  And who knows if either is true. But I would imagine that both sentiments were stated earnestly. His command of this crowd was impressive, and the passion in which he performed seemed intoxicating to his fans.

He performed just over an hour, and I’m sure he and his fans would have loved to continue the show.  He stated that before he played his final song “Gone” that he had one more song because that was all he had left.  He doesn’t have that many songs yet. But I feel like there will be many songs and albums headed our way in the future.

As he wrapped up the show, he thanked the Utah crowd for an amazing final night of his tour.  He then told them that he wanted to meet every one of them. I thought he was just throwing that out there like, “I wish I could meet all of you” kind of thing.  But no, he meant it. He said “I don’t know how we’re going to do this, but stick around. I want to meet all of you!” And sure enough, he did. After a few minutes back in the tour bus, Hudson reappeared and walked over to where his merch was being sold.  He said he was going to go inside and was happy to take a picture with anyone who wanted one. He stated that he didn’t care how long it took because “This was the last night of my tour. I don’t have anywhere to go!”

Think of the impact this had on the people at this show.  Sure, I’d imagine a lot more merch was sold that night. But what Hudson did goes way beyond selling merch.  “I remember seeing Harry Hudson at Kilby Court way back in 2018. And after the show, he stayed and met all of us!”  Think of the envy of anyone hearing this who missed this concert.  Now, I have no idea if he’s done that everywhere on this tour, or not. I do know, however, that those fans walking out of the merch room who had just met Hudson had just come from making a lasting memory.  I thought it was such a cool move by Harry.

Harry Hudson will be back in Utah one day.  And he’ll be playing at a much larger venue.  But Kilby Court is where it all starts here in Utah.  Hudson sold out the ‘Rite of passage’ venue. Now on to the next! 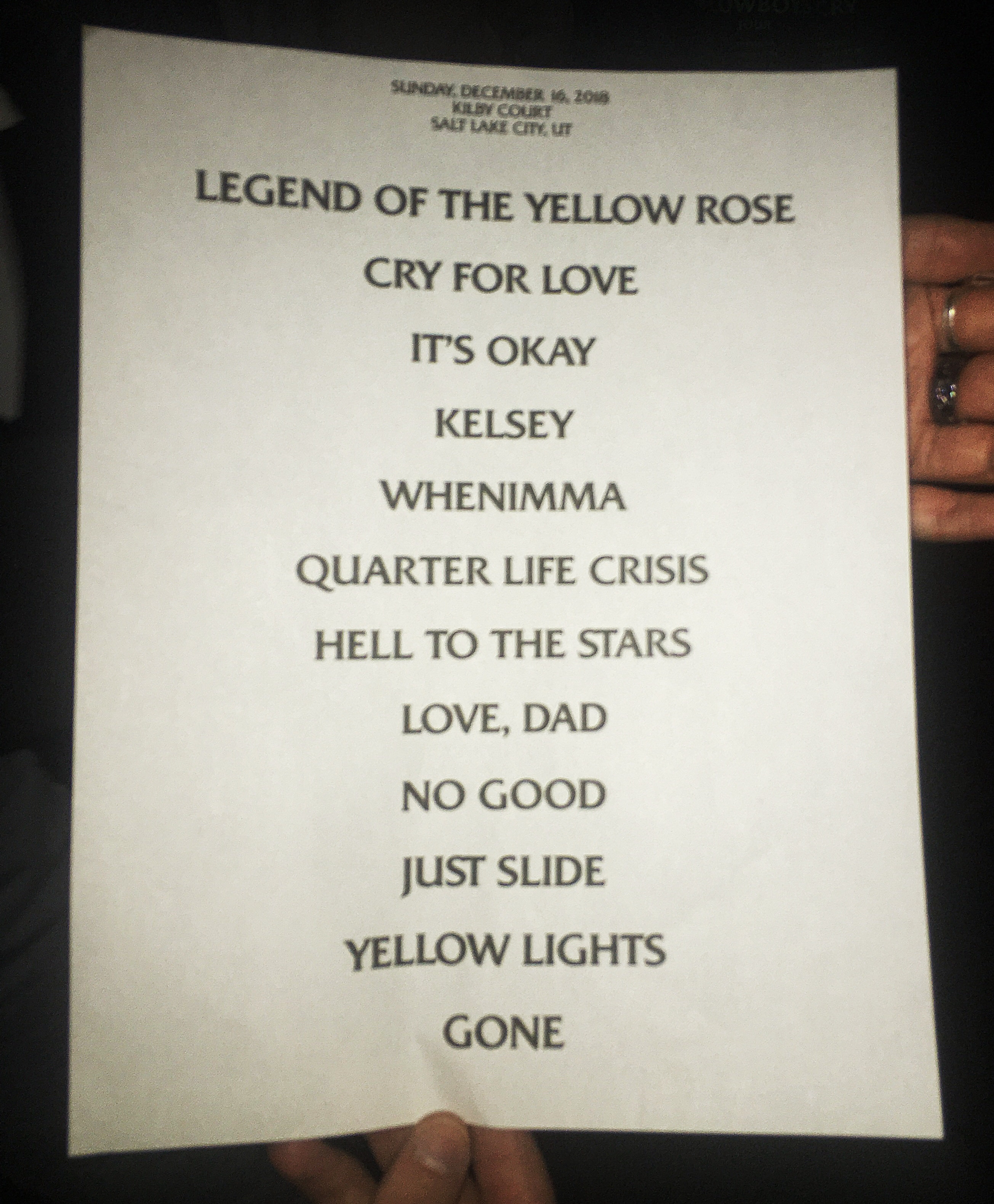