I was introduced to Gregory Alan Isakov by my friend Justin.  He used to talk to me about Gregory in a matter of way as if to assume that I knew who he was.  He mentioned him in this way so often I started to think ‘This Isakov guy must be pretty good if Justin is just figuring that I know who this is.’.   So I checked him out and I felt foolish for having not been familiar with him sooner.

I was really excited to be seeing Gregory for the first time at the beautiful Eccles Theater in downtown Salt Lake City.  I absolutely love the Eccles Theater. Having just celebrated its second anniversary in operation, the Eccles Theater has brought some great acts, both theatrical and in concert to our capital city.  The sound is incredible in there. It’s perfect. There is something about a seated venue built for theatrical and orchestral performance that helps make the sounds of the strings come to life while the band is playing. There isn’t a bad seat in the venue, and I’ve been everywhere from the tippy top row to the front of the house, to the box seats on the side.  I have yet to see a poor performance there.

Now Gregory Alan Isakov is no stranger to playing Utah.  He’s played in most of the smaller venues throughout Utah as well as Red Butte Gardens.  However, despite his frequent Utah visits, Isakov mentioned that being in front of the near-capacity crowd at such an incredible venue was “A little scary”.  I wouldn’t be surprised if he returns to Eccles Theater the next time he pays us a visit. I’m hoping it’s his Utah venue of choice going forward.

Gregory Alan Isakov was joined on stage by Jeb Bowes on Violin/Fiddle, Steve Varney on Mandolin, Guitar and Backing Vocals, Philip Parker on Cello and Keys, John Grigsby on Bass (both electric and stand up), and Max Barcelow on Drums.  Not only was it obvious that these men were all exceptional in their craft, but that they fit together like pieces of a puzzle. There were times during the show where I would focus on one instrument, and every time I was blown away by the level of talent.  They all seemed to really enjoy performing together. They would look up at one another and smile.  That’s usually a good indication that they’re having a good time.

Isakov’s newest album was set to be released just a couple of hours following this concert. Midnight to be exact. Something I love is hearing songs from a yet to be released album for the first time live.  If I like those songs then the anticipation for that album release is that much higher. Let me say that two-hour wait leading to the release of Evening Machines felt like a week.

The show began with three songs from Isakov’s unreleased album, and the audience listened to these songs as intently as a group listening to instructions on how do dismantle a bomb in their lap.  The room was silent. Eyes were staring directly at the stage, and for a while, no phones were out. It was a beautiful experience. I was allowed to take photos for the first three songs which is the usual photo pass guideline.  Never before have I felt more in the way or bothersome with my positioning and camera snapping. It was just so quiet, and I just didn’t want to distract from what was happening on stage. That being said, I could have walked across the stage in a speedo and no one would have noticed me.  All eyes were on Gregory.

Following the new songs, Isakov jumped into one of his more well-known hits “The Stable Song”, and continued to roll through songs without much chatter except to introduce his band members and thank the audience.  I noticed him taking a few long glances at the venue, amazed to be playing in such a beautiful place.

As the show went on a guy would yell “Encore!” every few songs or others would yell out various song titles throughout from the darkened crowd.  As I mentioned, this was my first time seeing Gregory Alan Isakov live, so I wasn’t sure if this was commonplace, or people just trying to be funny, or just really desperate to get a song they loved performed.  Sometimes it was funny, but sometimes it was distracting. To their credit, no one yelled out anything while the songs were being performed. And Gregory actually played a favorite song of mine “Idaho”, which come to find out, was not on the printed setlist but was suggested by someone in the audience.

Even with Isakov flying through his setlist, it seems at least based on the written setlist that more was planned for the evening but had to be cut short possibly due to time/curfew. Perhaps he cut a song because he added “Idaho”. Who knows but looking at setlists after shows it’s always a bummer to miss out on a planned song.  That being said, I was so happy to hear “Idaho”. So I’ll take the trade-off.

The entire show was a major highlight for me, but there were two major moments that stood out to me.  The band played “The Universe” in complete darkness. The stage was pitch black and so was the house.  There were no phones out. I mean, what would they take video of? The blackness? I don’t know that I’ve ever experienced something like that.  A room of three thousand people sitting in total darkness and focusing on simply hearing the music. It was a new and unique experience for me and I absolutely loved it.

The other stand out moment was the encore.  Isakov returned to the stage with show opener and Utah favorite Joshua James.  A single microphone was placed at the front of the stage and both men performed in tandem an awesome acoustic performance of a Bruce Springsteen deep cut “Dry Lightning” off of The Ghost of Tom Joad album. (Information I would have never known myself.  Thanks again, Justin!) Following the masterful duet, the rest of the band returned to the stage, gathered around the single microphone and performed “All Shades of Blue”.

The boys walked off stage, and the lights came up.  I looked around and the general expression on faces was “Wow”.  Or just nodding to each other, which was basically saying, “Yep, that was incredible.”.  The energy in the room was not electric, but rather a feeling of contentment, and a feeling that we experienced something very special.

I’m glad to know that Gregory Alan Isakov plays Utah on a fairly frequent basis.  I’m not sure if it’s due to him and his band being based in Colorado, or if he just knows how much Utah loves him, but knowing he’ll be back sooner than later makes me very happy.  Go listen to Isakov’s catalog of music. It’s exceptional. If you like what you hear, just imagine what his concerts are like. 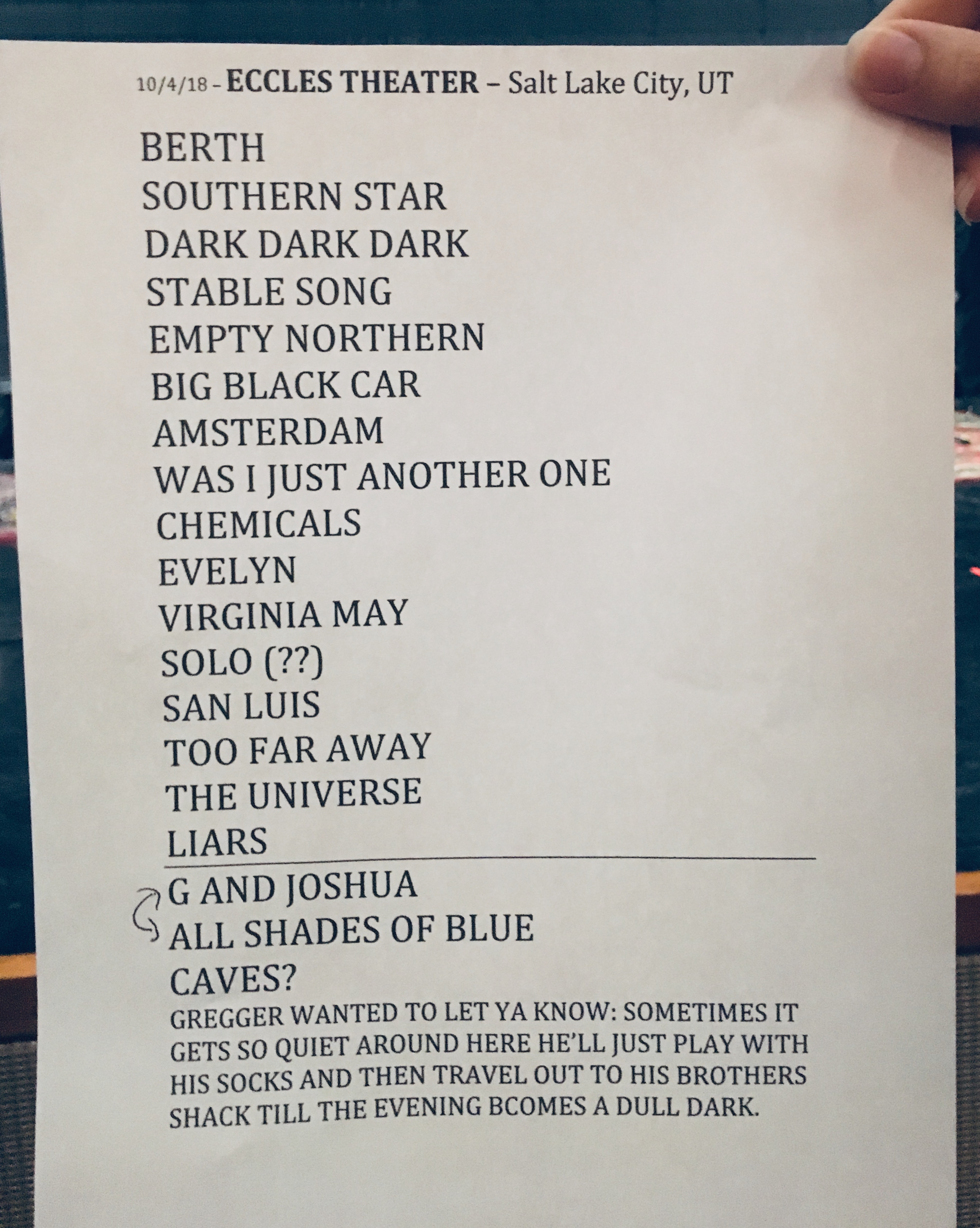