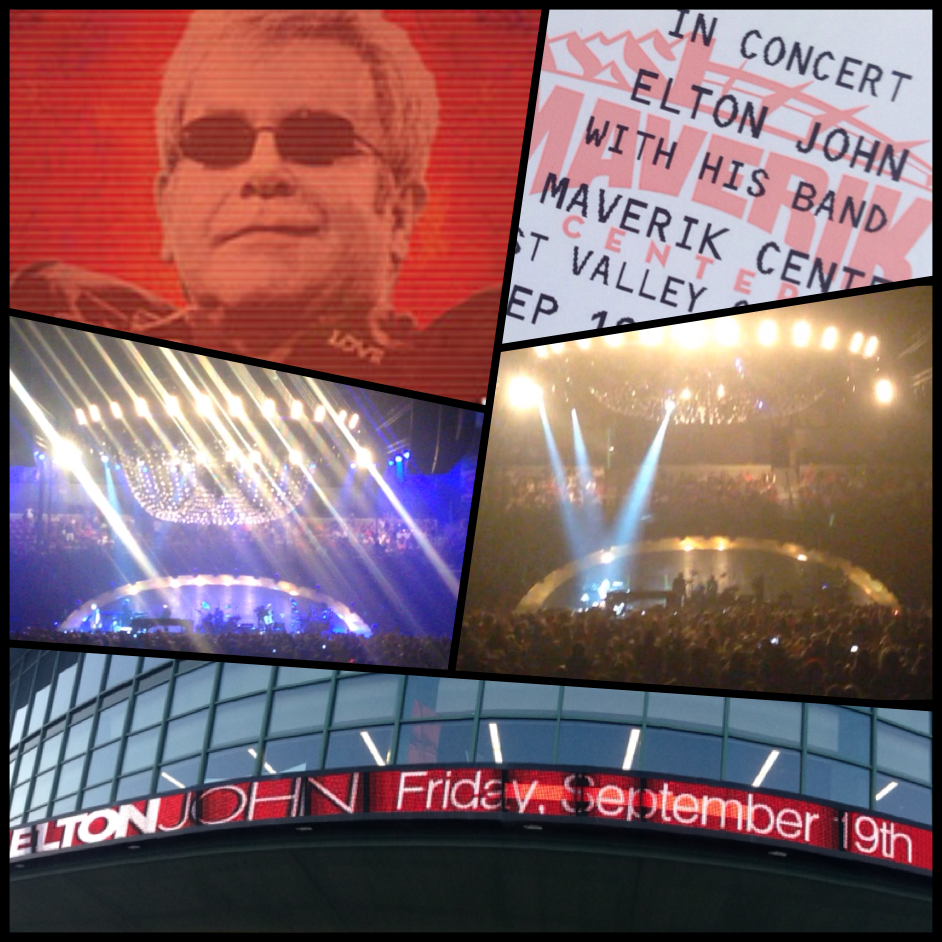 It’s hard to believe that for 31 years, Elton John had at least one song charting on Billboard’s top 100. Now try to pack all those hits into one night. That was Elton John’s dilemma on Friday night at the Maverik Center. But I think he did a great job of covering those 31 years in a two hour show.

I had known Elton was coming to town for some time, but until it was the week of, for some reason it didn’t occur to me that I should go to this concert. I almost missed out on a great night. Don’t get me wrong, I am most certainly an Elton John fan. I think even if you’re not a die hard fan, it’s impossible to not like at least one of his songs. Even if someone else is singing it in one of his movies, or stage musicals. It’s hard to not be impressed with his body of work. But despite the Grammy’s, the Tony’s, and even the Academy Awards, what it really comes down to is how amazing these songs really are. There is something for everybody.

Sir Elton walked on to a darkened stage at exactly 8:30 pm. Even though the stage was pitch black, you could see him from a mile away. All the cameras taking pictures exposed his knee length sequined coat. It’s funny, because looking back at some of the things he used to wear on stage, this coat was actually pretty conservative. He walked out to “Funeral for a Friend” and then once he reached stage joined right in with the rest of the band. Then of course continued with “Love Lies Bleeding”. The Utah crowd did not disappoint . People were up and dancing during this song, and could not have been more excited that this legend was in town.

He came out guns blazing with with his huge hits “Bennie and the Jets” and “Candle in the Wind”. This is what I’m trying to say people. These are huge songs of his, and he did them right at the top of the show? Was he going to run out of songs? Was the show going to start strong then lull when he started playing deep cuts? Nope. He had enough hits to play for an hour more than he did, and this was a full two hour show.

I remember looking at my phone to see what time it was thinking he had probably played for maybe 30 minutes. But he had already played for an hour and 15 minutes. Time flew by in this concert because each time you may have thought he was going to hit that “beer run” segment of songs, he didn’t. I think he played maybe 3 songs I hadn’t heard before, and those were great. And when he played those, the people that did make their beer runs, had to have been really bummed when the following song was one of his biggest hits. Songs like “Levon”, “Goodbye Yellow Brick Road”, or “Don’t Let the Sun Go Down on Me” followed songs that may not have been as familiar to this crowd.

He didn’t do a whole lot of talking to the crowd, but when he did, he usually had something fun or interesting to say. At one point he spoke of being more comfortable in his own skin than ever before, and because of that, he enjoys performing more than he ever has. Normally I would think maybe an artist will just say something like that just to get a cheer from the crowd. And while he was applauded for that comment, I think he was being genuine. He seemed in very good spirits, and I think he really enjoyed himself.

Elton John also talked about the success he’s had with his writing partner Bernie Taupin. In case you don’t know, Elton John has never written the lyrics to any of his songs. He said that he and Bernie have never even worked in the same room. Bernie would write in another room, then come to Elton with lyrics he had written, and then Elton would go to the piano and put these words to music. It’s a formula that has clearly worked (understatement of the year). Sir Elton mentioned that when they were first starting out, they lived with his mother, and one day Bernie came to him with what he called the most beautiful lyrics he had ever read. Especially for an 18 year old. He went to the piano, and created what was to become his first hit, “Your Song”. He said he owes all the success he’s had to that song. I’ve included video footage of this song as a reminder of just how beautiful this song is. In my opinion, these lyrics are some of the best written in popular music history. It was really cool how he set up the song, and it made for a special moment in the show. Needless to say, the crowd was so excited to hear this classic. The ovation he got after was tremendous and well deserved.

Elton closed his main set with four upbeat songs. This was the moment when the majority of the arena was up and dancing, and just letting loose. With Elton’s songs it’s sometimes hard to know when to sit and when to stand. I usually like to stand at all concerts, but I get the demographic of this show wasn’t going to do that, so I tried to pick my spots. But here, it was obviously stand up time. He left the stage and of course he returned to a crowd that was as loud as they had been all night. Maybe even louder. Encores are a funny thing aren’t they? We know they’re coming back. We know they have some huge songs they still must do. It’s such a weird tradition. I do remember though when I was young, hoping and praying my favorite groups would return. But now that I’m older, I guess I’m more aware that this is just what bands do. I would have liked to have seen the time where encores originated and people weren’t sure the artist would come back. What if they didn’t? That’d be the worst! Anyway, I’m getting off track.

Sir Elton came back and kept the crowd on their feet with “Crocodile Rock”. That was fun. The crowd sang the La La La’s in the song, and the energy was at its highest point. After that song Sir Elton brought the show to a perfect close by singing one of my favorites, “Daniel”. He did this song alone. Just him, and his piano. It was beautiful. And made me wish he had done a few more songs like that.

I left this show totally impressed with the performing chops of Sir Elton John and his band. Many of whom had been with him for 40+ years. Of course there were some other songs from his catalogue that I would have loved to hear, but like I said before, how do narrow down over 45 years of songs into a two hour show? He’s been at it a long time, but not once did I feel like he was just going through the motions, or giving us a half hearted show. I think he really enjoyed the energy and excitement of this particular audience. I know I say this a lot, but I don’t think artists passing through, expect to get what they get from Utah crowds. We appreciate them stopping into our small city, and we show them our gratitude with really getting into the show. If you haven’t ever seen Elton John, I recommend you do. Even if you’re not a huge fan. If you care about the history of rock n roll, or popular music, this is a show not to be missed. Elton John has left his mark, and influence on music, and he’s still doing it. Cheers to him, and I look forward to what he’ll do next.

Funeral for a Friend/Love Lies Bleeding
Bennie and the Jets
Candle in the Wind
Grey Seal
Levon
Tiny Dancer
Holiday Inn
Philadelphia Freedom
Goodbye Yellow Brick Road
Rocket Man (I Think It’s Going to Be a Long, Long Time)
Hey Ahab
Oceans Away
Your Song
Burn Down the Mission
All the Girls Love Alice
Home Again
Don’t Let the Sun Go Down on Me
The Bitch Is Back
I’m Still Standing
Your Sister Can’t Twist (But She Can Rock ‘n Roll)
Saturday Night’s Alright for Fighting