The Park City Institute is a non-profit organization, dedicated to bringing world-class performances and new ideas to the community have had an interesting turn of events leading up to this year’s St. Regis Big Stars Bright Nights Concert Series.  In December they were informed by Deer Valley Resort that they would no longer be hosting the series because they were going to be setting up a concert series of their own. This sent The Park City Institute on a months-long search to find a new home in time to host the great lineup of music they had scheduled.

Initially, they landed on Quinn’s Junctions Sports Complex, but fate would eventually lead them to City Park in the heart of Park City.  While City Park may not be the most ideal place to host a concert series, once things get going, it was as good an outdoor venue as any.  Some of the setbacks are well, it’s in the middle of a park. So you can go take your kid to the playground, and catch a free concert because there is no more than a temporary fence that is easy to see past.  The same goes for the street and sidewalk. I noticed maybe a hundred people watching the show from outside the “venue”. So I guess the venue isn’t ideal for keeping people looking for a free show out. Otherwise, it does just fine.  The stage is big enough, the sound is good, and there really isn’t a bad seat in the house, I mean park. The show in the series I was fortunate enough to attend was Don Felder, former lead guitarist for The Eagles.

Be for Don Felder took the stage a couple of women from the Park City Institute made an announcement from the stage that the organization was in need of up to $500,000 in donations or the concert series may not continue.  Those in attendance seemed concerned because it was apparent that they enjoyed coming to the series. It’s a great organization, and the concert series lineup is always good. So if you have the means, please donate. You can find all the info here.

The transition from that announcement to Don Felder taking the stage was an awkward one.  It was just quiet, with no one introducing Don, then a video came on giving him an introduction.  I’m not sure how to have made that transition smoother, but it definitely could have been. However, Don took the stage, opened with “Already Gone” and things were smooth from there.

Don next played “Pride and Joy”, a song originally written and performed by iconic guitarist, Stevie Ray Vaughan.  Now to attempt to cover Stevie Ray Vaughan is one thing, but to do it really well is another. Now, I fully understand that SRV is one of a kind, and to his fans, no one will match him.  But I will say that Don Felder’s cover of “Pride and Joy” was great. It paid its respects to the original, and to Stevie, but it showed off the guitar playing chops that Don Felder truly has.  If was one of my favorite songs of the night.

When Don played “Peaceful Easy Feeling”, he told the audience “You look like a peaceful crowd.”  I’m sure he was referring to the fact that most of the people there were still sitting in their chairs or on their blankets.  This isn’t to say that they weren’t into the show. They really were. But they weren’t up and dancing like I’m sure most artists would prefer.  I think some of this has to do with the show starting so early. There was an opener that went on at 6, and Don took the stage by 7. It was light out for the entirety of the concert. I think when it’s light out people are more hesitant to get up and dance.  That is at least until the alcohol kicks in!

Don dedicated “Tequila Sunrise” to his former Eagles bandmate, the late Glenn Frey.  The audience cheered their approval. Glenn Frey passed away unexpectedly in 2016 at 67 due to complications from rheumatoid arthritis, acute ulcerative colitis, and pneumonia.  It was a class move by Felder and another strong moment in the show.

With about four or five songs to go, Don invited everyone to get out of their seats, come to the front of the stage and party.  There’s about a fifteen-foot gap between the stage and the front row of chairs and it filled up really quick. It was clear that the invitation to “party” was well received.  I’m sure artists are hoping that the audience will just jump to their feet on their own, but sometimes it just takes an invitation to do so and the whole place gets up. I admire Don for throwing out the invite.  It felt like the concert really took off from there. With songs like “Life in the Fast Lane”, “Heartache Tonight”, and “Take it Easy”, it was obvious to see why people were so willing to get up and dance and sing along.

Felder finished the night by walking on stage with his infamous white double neck guitar.  This is the very guitar that he wrote “Hotel California” on. So when we saw the guitar, we knew what was next.  The crowd cheered, sang along, and stood in awe as Don Felder played the instantly recognizable guitar solos of “Hotel California”.

When the song finished, Don thanked the audience, acknowledged his band (Who were fantastic.  Seriously, so talented!), and walked off stage, never to return.  The crowd wanted more, and they cheered until it was obvious that the show was over. People have different feelings about the whole encore thing.  And I think Don would have done an encore, but when you’re playing in a venue that has a temporary stage in a park, sometimes there isn’t anywhere to go.  So walking off stage and back on for an encore might be more awkward than just staying there and playing straight through. I’m sure “Hotel California” is usually his encore, so I can’t imagine we missed anything other than the ceremonial walk off stage, walk back on stage.

I had a great time at this show.  Don Felder is a really entertaining performer and an amazing guitarist.  It was a fun and beautiful night at City Park. 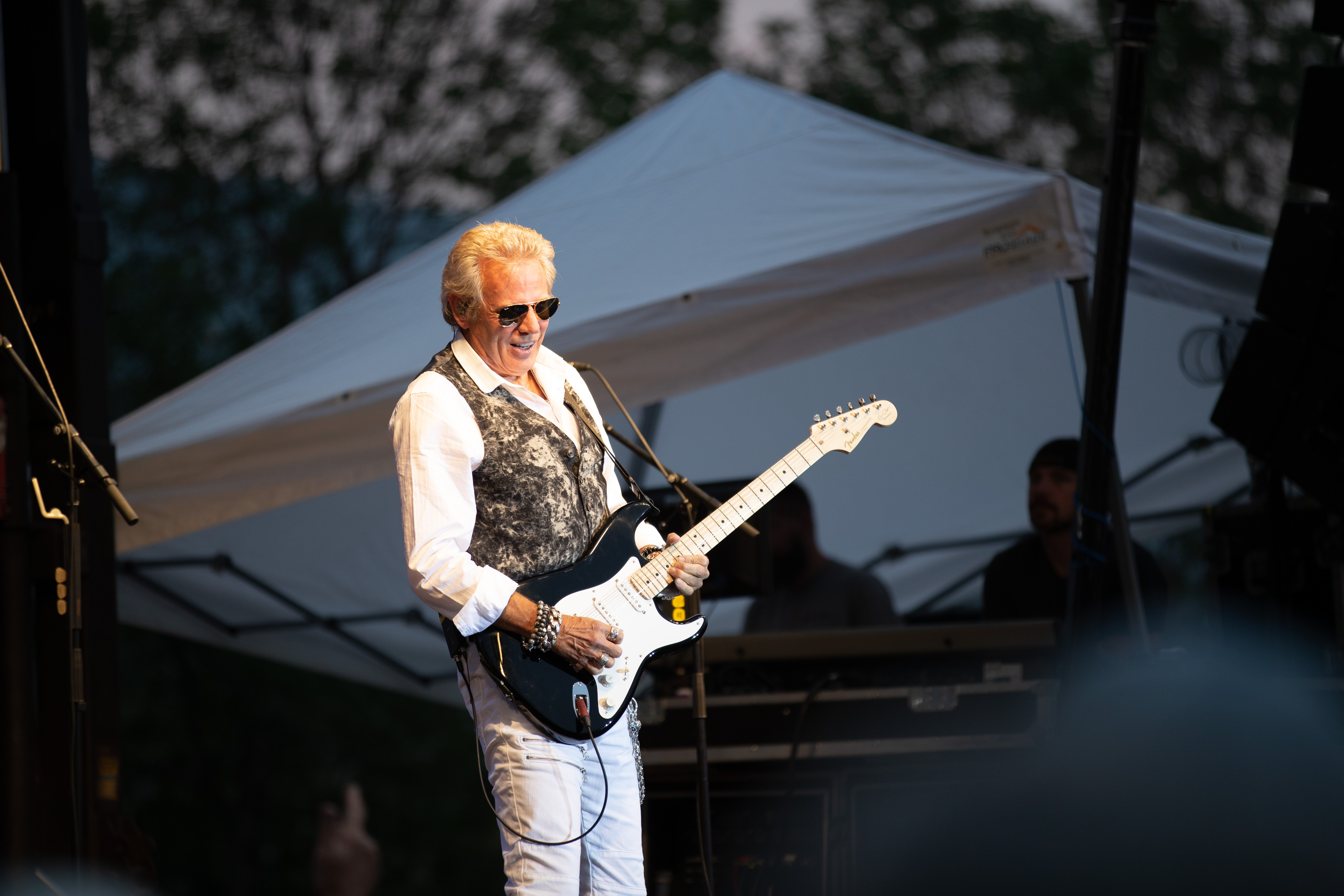