In case you hadn’t heard, Utah loves David Archuleta.  So much so that he scheduled five stops throughout Utah on his Winter in the Air Tour.  Last night I saw thousands of adoring fan scream their hearts out at the UCCU Center in Orem. If you can believe it,  David was the runner-up on American Idol ten years ago. But I don’t think his popularity here in Utah will ever fade no matter how far we get from Archuleta’s epic showdown with David Cook.

When I spoke to David a couple weeks ago, I could tell how excited he was to bring this show to the fans in his home state.  Archuleta plays here quite often, so I’d imagine he was looking forward to presenting a new and original show. From the moment he walked on stage Archuleta was smiling, looking almost eager to meet this crowd.  And there was no doubt the crowd was so happy to be seeing him. At times the crowd sounded like one of those American Idol crowds. You know, when the contestant hits a big note, everyone goes crazy? It was just like that inside the UCCU Center. Every big smile, every big note, and every big move was greeted with a loud ovation.

I would say that judging by the sound of the audience, the majority of fans in attendance were female.  Many of them were in a trance everytime Archuleta spoke or sang in their direction. I recall looking over at a group of girls and they were battling over who in the group he pointed to.  From my vantage point, he was just pointing to the audience in general, but hey, if it makes their night thinking David Archuleta pointed at them, then who am I to say otherwise.  I’ve seen a few former American Idol contestants, including season one winner, Kelly Clarkson, and I don’t think I’ve seen any of them get this kind of response. There is still a real teen idol feel to the way these fans were fawning over him.  Now, no one got too crazy. No one rushed the stage, and no one tried to tear any of Archuleta’s clothes. But the intense adoration was most certainly there.

The thing that surprised me the most was the depth and substance of this show.  Obviously, Archuleta is talented. I mean, how many winners of American Idol can you name, let alone those who took second place?  So the fact that he has a decade-long music career says more to me about his actual talent, than how we got to know him. With this being a Christmas concert, most of the songs followed that theme.  But only a few of the songs followed the commercial theme of Christmas and instead Archuleta chose to focus the majority of his set on the original topic of Christmas, the birth of Jesus. Songs like “God Rest Ye Merry Gentlemen” and “Pat-A-Pat-Pan” were given an upbeat arrangement to keep the show moving with a fun atmosphere.

David took the time to talk about being from Utah, and how much he loved coming back.  He mentioned that his sister attends Utah Valley University where the UCCU Center is located.  He seemed in great spirits the whole evening, sharing his joy in releasing his second Christmas album Winter in the Air.  He told us he would be performing three songs he penned from the album. One would be spiritual, one would be about winter, and then one would be a fun Christmas song.  He started with the spiritually themed “He is Born”. He followed later in the show with the winter one which is the albums title track, “Winter in the Air”. I always get a little skeptical when I hear new original Christmas songs.  I’m can be particular and like the songs I grew up with. But I have to say that these were solid songs.  During “Winter in the Air” a man and woman dancer stepped onto the stage dressed in all white. They danced beautifully as Archuleta a sang a little off to the side, giving them the spotlight.  I thought it was a great moment in the show.  I found it really cool that David kind of took a back seat to the dancers for this song.  I thought it showed a lot of humility.  “Christmas Every Day”, which David closed the main part of his set with is a song that I think we’ll be hearing for many holiday seasons to come.  It’s his upbeat Christmas song, and it checks off all the things that make fun Christmas songs re-listenable.

I have three personal highlights from this show.  “Christmas in the Air” was one of them. When the song started, the crowd cheered with excitement.  It made me really happy for David. It had to feel good that a new song he co-wrote was that well received.  Many fans rose to their feet to dance along with this song, just as they did when Archuleta sang his first hit single “Crush”.

I think the biggest highlight for me was when Archuletta sang, “My Little Prayer”.  He told of us that he tries to kneel down in prayer when he wakes up, and before he goes to bed.  He shared that one night he had forgotten to pray before going to sleep, and in the midst of a dreamlike state, he dreamt he was speaking with God.  However, he was communicating through song, and God was responding through music. He dreamt that God told him to wake up and write down the music in his head or he’d forget it by morning.  David did just that, and the song became “My Little Prayer”. Now, religious or not, Christian or not, it was impossible not to feel the depth of Archuleta’s faith and spirit in which this song was intended.  I don’t know if this happens often, but towards the end of the song, Archuleta became emotional. He finished the song with tears in his eyes, and a quiver in his voice that only enhanced the moment. As I looked around the venue, I could see many a tear-stained face.  It was the most impactful moment of the show and a touching display of what David Archuleta is all about and what kind of show he wants to bring to his fans.

The final highlight was “O Holy Night”, the song Archuleta closed the show with.  This is the perfect song for David’s voice and was the perfect song choice to end the evening.  I don’t know what song could have followed this performance. Once again, I could see people wiping away tears from their eyes. It was a beautiful performance.  “O Holy Night” is not an easy song to sing. But Archuleta looked effortless throughout the song. I noticed him grip the microphone stand when the big note at the end of the song was approaching.  I was a little nervous for him. “Utah is dry! What if he can’t hit it tonight?!” I thought. But I worried for nothing as that big powerful note rang out perfectly through the arena.

I have to say that I was more than impressed with this show.  It was a really fun and meaningful Christmas concert. I think if I was ever to see David Archuleta in concert, this was the one for me.  He’s an excellent performer and has a singing voice that I think Utah will love hearing again and again for years. A great selection of songs sung by a very talented vocalist makes for an entertaining night in December. 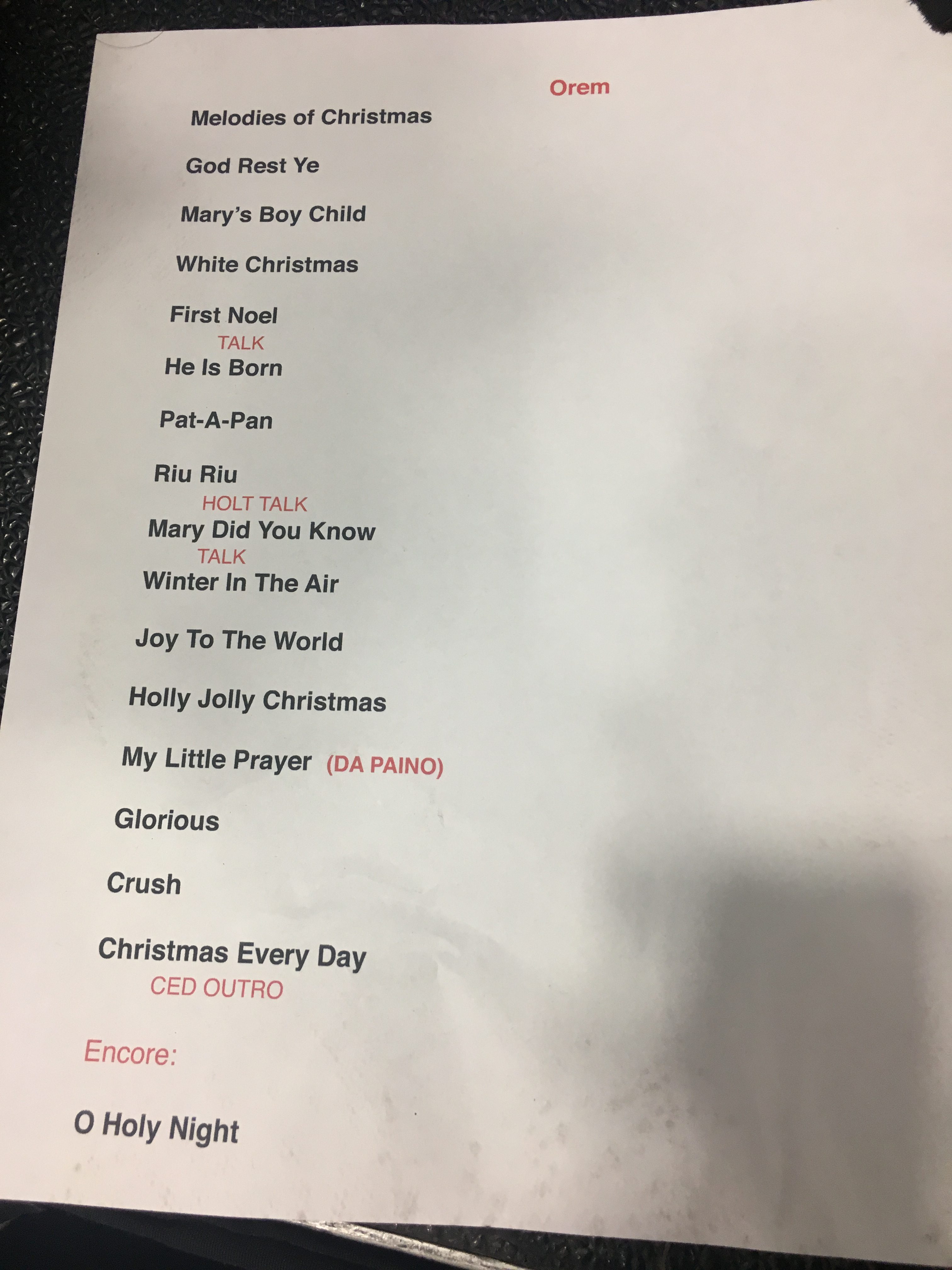