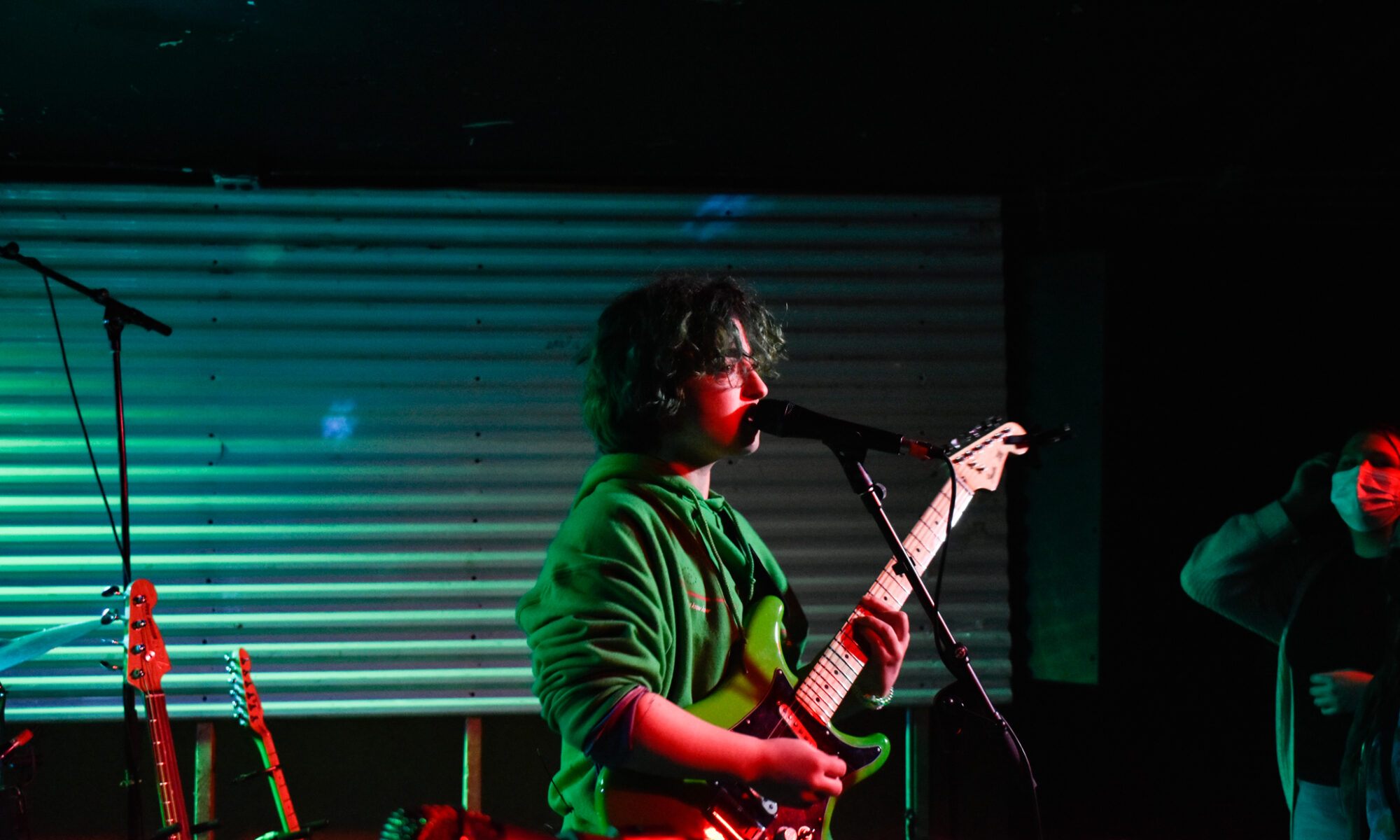 Reviewed and Photographed by Ellie Powell

On March 2, I had the opportunity to go and see Claud’s “Super Monster” tour performed at Kilby Court! I arrived only a few minutes before the show started. Luckily I made it into the venue easily alongside the excited fans. The venue was decorated with a blue and green theme. It reflected the theme of Claud’s album Super Monster.

Claud’s first opener was Brother., a band who just so happens to be from Salt Lake City! They did an amazing job performing and had amazing energy on stage. The crowd was very excited to see Brother. perform. Their entrance was met with loud and excited cheers.

They played through their first two songs. After their third song, “Don’t”, the lead singer repeated, “can I get an amen” twice. Each time met with an enthusiastic response from their fans.

One audience member commented on how they had a “fun light show”, and that was very true! It made their set even more engaging for those in the room. Their set was performed with buzzing energy from the band and met with the same from the audience. Everyone bobbed along to the beat of the music. They did an amazing job. This was their first show on this tour. I hope they have fun on the rest of the tour!

After leaving to check out the merch table (and getting a free sticker), I came back to see Dad Bod from Minnesota! They started to set up when we returned, and the crowd was definitely excited to see them perform.

After a couple of songs, they introduced themselves. They mentioned their knowledge of the existence of Dad Bod from Salt Lake. One of the guitarists thought it would be funny if they were to meet up at a venue and have a competition. The sign in the back that had Claud’s name on it did fall. But they had fun with it and handled it very well (it did eventually get put back up).

They are a very talented band. One of the guitarists was facing the back the whole time, and I may not know why, but it was a cool twist. Their set was a lot of fun! Before one of their songs (“Rot”), they mentioned how it had gotten half a million listens on Spotify, and how grateful they were for that. Congratulations to them! This was their last show on the tour, and I hope that they had a great time!

The intro to Survivor’s “Eye of the Tiger” began to play as Claud made their way to the stage. The cheering crowd only added to the rapidly increasing energy of the room. They made it on stage, quickly introduced themselves, and began playing their first song of the night! They played their bright green guitar, and then switched to bass for the second song. This was a common switch made throughout the night, and I thought it was really cool! The banner in the background did fall down again at some point, but once again, it was handled extremely well.

Near the beginning of their set they mentioned how they were “Expecting snow, salt, and lakes” while in Salt Lake City which, to be fair, is a reasonable expectation given the name. Our state was later on complemented as they mentioned that the drive in was pretty! During a later song, “Neon” in the phrase “neon sign” was replaced with “Salt Lake City”.

During the transition before their fourth song, they asked the crowd “it’s a Wednesday… who lied to their parents about where they were”, and there were a few cheers from some (hopefully) honest audience members.

Their fourth song was called “Pepsi”, and it was obvious that fans have been having a blast throughout Claud’s whole set! People were deeply into the songs and just having fun with those around them. After Pepsi, the bassist (Molly) struggled with their transition to their guitar due to a sound issue, but Claud was more than happy to offer up theirs (after jokingly forcing them to “play more play more!”) and things were able to proceed smoothly!

During “Mr. Bitch”, Claud took out a disposable camera from their pocket and began filming the crowd as they sang and danced around. After this song, they performed a new one titled “Go Home”, and asked if anybody was from Chicago (which no one was, to Claud’s disappointment). Next, before “This Town”, Claud explained that they make up a story about the song every time they play it. They explained that they really don’t know what it’s about.

The night was full of different anecdotes, such as the topic of Crocs and how Claud accidentally spilled hot tea on their Crocs and ended up with circular burns on their feet and a ruined laptop. A teaser of “Driver’s License” by Olivia Rodrigo was performed as well, which ended shortly after it started as Claud explained that they don’t actually know how to play the song (and briefly mentioned that they couldn’t be seen while seated at the piano).

The crowd members left the show buzzing, as Claud had left us all feeling very happy! A great performance was given as well as some music advice (“the thing about playing the keyboard is you have to hit the right notes”). We are most definitely looking forward to their return here to Salt Lake City and are excited for what they may have in store for fans in the future!