Salt Lake City’s prominent alternative station X96 did the Utah community a solid by sponsoring, along with others, The Salt City Sounds concert series, a free concert downtown at the Gallivan Center.  Their invited guests were Broods.  A brother and sister electronic duo from New Zealand.

With only a couple days away from the release of their much anticipated new album ‘Conscious’, we were given a well mixed 13 song set featuring favorites from their first album ‘Evergreen’, along with songs many of us were hearing for the first time.

Lead singer Georgia Nott didn’t let the hot summer night, or even the high elevation slow her down.  She owned the stage with a balanced, yet highly energetic display of crowd work, and vocal prowess. Georgia is bite size.  I mean, she’s tiny!  With the way the stage is set up at the Gallivan Center, there were times when the crowd was jumping up anddown, she would all but disappear.  I noticed how much the crowd enjoyed when Georgia spoke with her New Zealand accent.  Many of them actually wanted her to speak more often.  Keyboardist, Caleb Nott stayed busy working synths, drum pads, and backing vocals.

Once again, Utah concert goers have done it again.  Early in the show, Georgia mentioned how much they loved performing in Utah.  She told us not to tell anyone, but I had to say it because I have always believed this is one of the best places to see a show, because the crowd is usually so good.  I’ve been to enough concerts to know thatthese artists are genuine when they say that.  And I’ve heard many bands come through here tell us that this is their favorite place to play.

The only thing that wasn’t my favorite, was they left the stage and never came back.  The crowd was the highest they had been the whole night, and they stuck around hoping, maybe even expecting Broods to come back.  But they never did.  Now, I know that the whole encore thing is a little cliche’, and it is understood that our cheering isn’t necessarily what’s bringing the band back on stage.  But, it is what it is.  We want you to leave, we want to cheer, and we want you to come back and sing a few more songs.  That’s just how it works.  Don’t get me wrong, it didn’t ruin the night or anything.  We just want our encore! 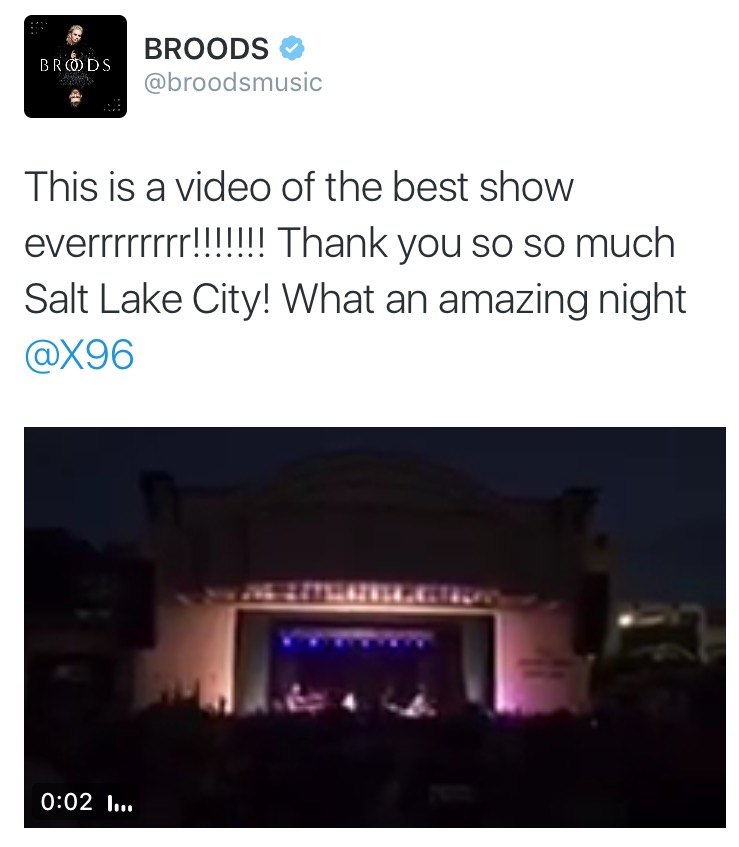 As the band left the stage, Georgia Nott said “Best show ever!” into the microphone.  Now it’s hard to believe that this would truly be the case.  But, later that night, a clip of the show was
posted on their twitter account making the exact same statement.  So, I have no other choice than to believe her. It was a really fun night.