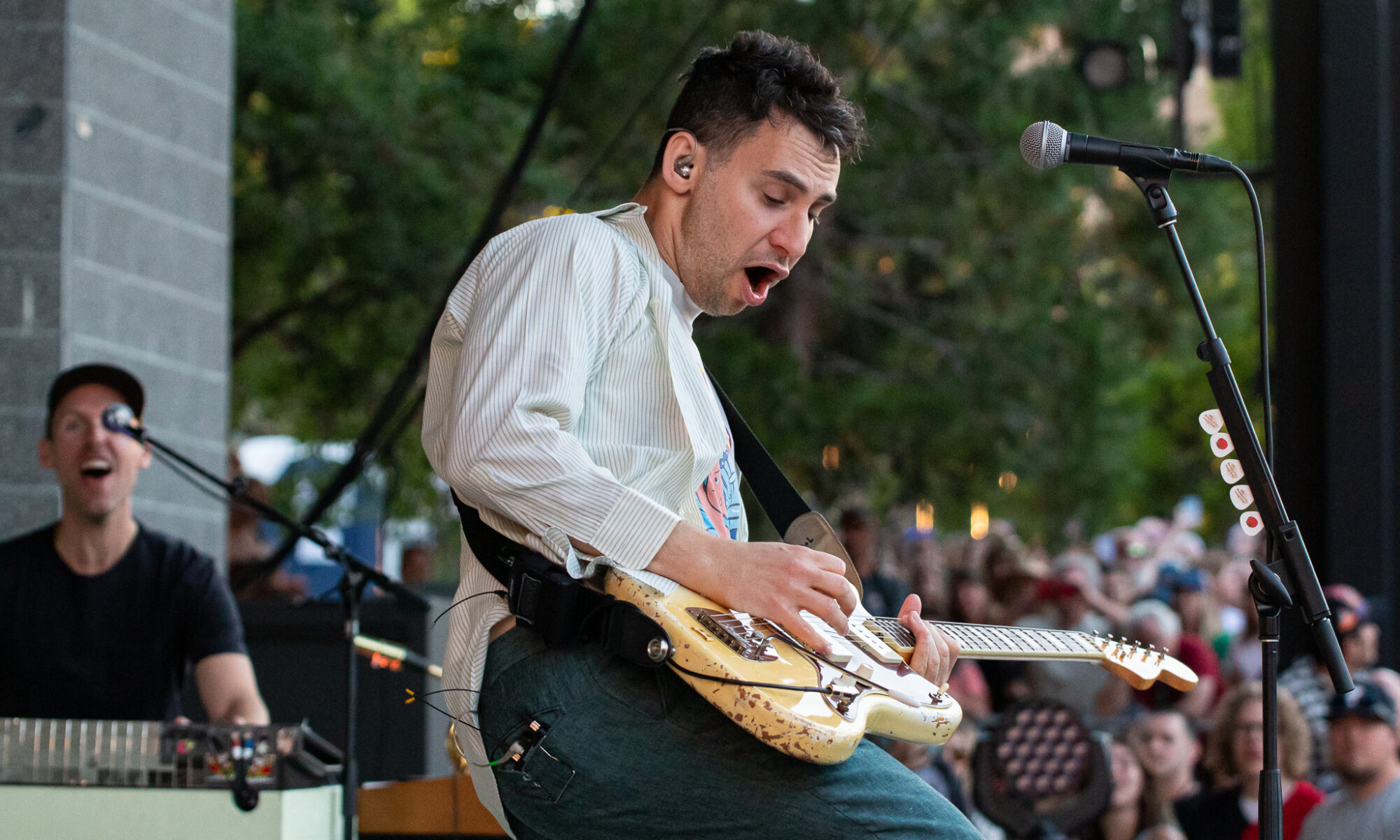 If it were possible, I would simply write, WOW, and be done with my review. It’s just about all that needs to be said. What an incredible night of music. Bleachers opened up the 2022 Ogden Twilight Concert Series. Everyone else scheduled to play in this series will have their work cut out for them when it comes to measuring up to what Bleachers brought to the Ogden Amphitheater. Less than a year ago, Bleachers played a memorable show at The Union. I, unfortunately, had to miss that show. The discussion of how amazing that show lasted for weeks. I regretted so much not being there. So when I saw that Bleachers would be on the Ogden Twilight bill, I knew I couldn’t miss it.

We have some really good venues in Utah. I don’t know if we have any great ones. Bleachers came to Utah by way of Colorado where they played the legendary Red Rocks Amphitheater. They are most likely leaving Utah and at some point ending up in Los Angeles. Where they’ll play the Greek Theater or maybe the Hollywood Bowl. We don’t quite have that level of iconic venue just yet here. I get a little insecure, like a band will think, “We were just at Red Rocks. Now we’re inside of a warehouse with a stage.”. But then I remember, that what we might lack in great venues, we more than makeup for it in amazing crowds. Utah has great fans. The buzz inside the Ogden Amphitheater was electric. ABBA’s greatest hits were played over the PA and the audience sang along as they waited for Bleachers to appear.

While Utah might not have what some might consider iconic venues, they do have some really enjoyable venues to see a concert. Ogden Amphitheater is quickly moving up the list for me. It feels like a larger venue than it actually is. There really isn’t a bad spot inside. Lined around the back with food trucks and other booths, there is a lot to do and see well before the concert begins. This venue combined with the amazing Twilight Series lineup makes for an almost guaranteed good night out.

The time came for Bleachers to take the stage. The crowd was chomping at the bit and seeing the band take the stage gave the audience this huge moment of released energy. The place went wild. I was up in the photo pit and it was like this huge wave brushed passed me onto the stage. Bleachers opened with “91”. The song began to build and they moved right into “Dream of Mickey Mantle”. These songs seemed to be building in momentum into some huge explosion of sound about to happen. “Wild Heart” and “How Dare You Want More”.

We’re just a handful of songs in and the show was already hitting its stride. I wondered if the crowd or Bleachers frontman Jack Antanoff would have the ability to sustain this. That’s because I’m an idiot. How dare I question the great Jack Antanoff or this Utah audience? They were feeding off of each other and it would sustain them the entire night.

Antanoff shared with the audience that playing Utah has felt like a hometown show. “Utah has been our home from the beginning.” Recalling times back in the day playing Kilby Court. I take it back. For better or worse, Kilby Court is an iconic Utah venue. So many bands have made their way through that venue and on to greater things. Crowds love hearing that a band once played there. And many of them fib and claim to have been there. But there’s no way the number of people who claim to have been at these shows would fit into Kilby Court. But I digress.

Anytime Jack Antanoff called on the crowd, they were right there for him. Singing every single word. People all over Ogden Amphitheater were throwing up heart hands throughout the night. Antanoff reiterated throughout the night his love of Utah. Asking how many from the crowd were from Utah or who came from out of state. The majority of the crowd was from right here. He followed up by asking if anyone was at their Red Rocks show. A decent number of fans had made their way to Colorado for the show. Jack told us it was a pleasure to be here.

He then had some not nice but very funny things to say about Clevland of all places. He told us Utah was where people came to have a wonderful happy life. Everything he was saying felt so genuine. It seems like he has some great memories of playing here over the years.

It’s hard not to comment on all of the great things Jack Antonoff had to say. But I don’t want to make it seem like he just talked the whole time. The night was filled with music. Some of my favorites from the middle of the set were, “Everybody Lost Somebody”, “Goodmorning” and an early surprise, “Rollercoaster”. It was the 13th song in a 22 song set. I figured I’d be hearing that towards the end. But Bleachers knew what they were doing. It was the perfect placement. I can’t express in words the level this crowd rose to. Do you ever watch festivals in Europe and people are all over each other, jumping dancing, and going absolutely nuts?

Think Glastonbury. Well, looking out at the Ogden Amphitheater during “Rollercoaster” looked very similar to that. I just stared and marveled at the expression of joy I was witnessing. It was a moving experience.

The show moved quickly. But also started to run long. The only reason I say that is some people take the train to Ogden. I can’t remember the exact time the last train leaves. But we were getting close to that. I don’t think anyone was concerned about that. Everyone seemed so in the moment of this amazing night. We were caught up in “Let’s Get Married”, “45”, and “You’re Still a Mystery”. People were really feeling every song, and I must admit, I totally get it.

Bleachers explicitly made it clear that they do not do encores. Jack Antanoff shared that he gets that other bands do it, it’s fine, but he wanted to make sure we knew how ridiculous he thought it was. The audience had a good laugh at the passion of his explanation. I don’t think Bleachers are a band that should do an encore. There is so much momentum built in their shows that leaving for two minutes might break that. Instead, they kept things going with huge hit, “I Wanna Get Better”. I know I keep writing about this, but I can’t help it. There were several times when I thought we had reached the peak of the energy this crowd could produce. And several times I was totally wrong.

“I Wanna Get Better” took this place to another high. And it didn’t end there. “Don’t Take The Money” kept things going. And “Stop Making This Hurt” ended the night. In some ways, I think everyone could have kept going. But I also think everyone gave all they had and that was the perfect place to end.

The Ogden Twilight Concert Series is off to an amazing start. It will be difficult to match this show. But the lineup is so good that I think there is potential to reach the levels Bleachers brought to Ogden Amphitheater.

Up next is Local Natives. But that’s not until August 4. Get your tickets and we’ll see you there! Well done Ogden. And Bleachers, please come back soon.