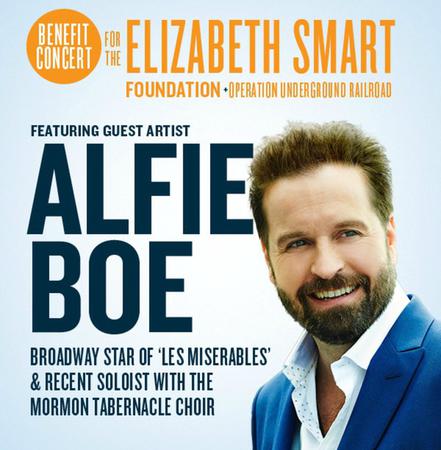 Alfie Boe is Tony Award winner, and known throughout the world for playing the lead role of Jean Valjean in the 25th Anniversary Concert at the O2 Arena in London. And while the latter event brought him into the spotlight for the mainstream world, many have known him and loved him for years. And there he was, in our own back yard, on March 14, at the UCCU center in Orem, Utah. Word on the street is Alfie is married to a native Utanian, and because of this he lives in Salt Lake City for part of the year. Because of this, we here in Utah have the benefit of getting to see and hear him in person, where otherwise we might not be so fortunate.

The events of this evenings performance can really be told in a tale of two acts. Act one, The Utah Stars and Friends show, and Act two, Alfie Boe. While many of the acts were top notch, I felt they were served quite the injustice as to how this show was advertised; (As can be seen by the posted picture) as simply an Alfie Boe concert. Not, a night where Alfie sings about 8 songs, and we listen to local talent for two and a half hours.

Upon arrival to the venue, there was a line for will call about a quarter mile long. Seriously. At first this was a concern, but I have to hand it to the ticket office at the UCCU center because they got people their tickets in a quick and efficient manor, all things considering. I must say, the UCCU center doesn’t seem like the best venue to host a night of arias, broadway showstoppers, and art songs. But I suppose it’s one of the larger venues in Utah County, so they made due to what was available to them. The acoustics seemed more suited for a basketball game, or a rock concert.

When I entered the venue and sat at my seat, I realized, this wasn’t just an Alfie Boe Concert. This was going to be much more. Now, I was aware that this was a benefit concert for the Elizabeth Smart Foundation and Operation Underground Railroad, but what I wasn’t informed of was that I would be listening to local artists for a while before Alfie came out. I was not the only one who didn’t know this. There was a buzz in my section and throughout much of the area, of people looking at the program and seeing a surprisingly long list of performances before they saw the man they had actually come to see.

Now don’t get me wrong, the artists that performed were actually extremely talented. So this is not a slight on them. And I believe if this concert was advertised as a show featuring local artists, people would have been more accepting. But because no one that I could see knew this was happening, they were more anxious for the first act to end. On top of this misinformation, the sound was terrible! The mix was so bad, and the treble was so piercing that people around the arena were plugging their ears. Again, I must say, this had nothing to do with the talent. Acts like, Gentri, The Strike, Everyman, Jenny Oaks Baker, Kendra Lowe, Ben Hale, The One Voice Children’s Choir, Aimey Kersey, and 12 year old sensation Lexi Walker, were amazingly talented, and many of their performances wowed the audience. But with the sound that poor, and the two and a half hours it took to get through the whole first part of the show, the audience was ready for it to be over, and sadly, I saw a few frustrated groups depart before they were able to see the headlining act. I thought that was a little extreme, but I understood the frustration all the same. And I can’t emphasize enough how poor the sound quality was. I felt for the local talent, because I think a real disservice was done to them.

Well, finally after about a ten minute intermission, the time had come. Alfie took to the stage, and to many it was if they had never had to sit through the previous act. And despite the flaws of the first part of the night, all was in fact forgotten once Alfie Boe appeared. I was nervous that we would be seeing this amazing tenor, and yet cringe at the high notes due to the sound. But all concern was lifted when he began to sing. The sound was excellent. The orchestra, and his vocals were mixed to perfection. I’m not sure if any of you recall going to concerts and the opening band never really sounds great, and then the headliner is always sounding good because everything is mixed to their specifications. Well that clearly seemed to be the case here. It was just unfortunate because the opening act went on for forever. If the opener is going to be over two hours, they should be better mixed, that’s all I’m saying. And I am sorry to be negative, but it just wasn’t fair for those performing to have to see people plugging their ears. Anyway, back to Alfie.

Alfie began his set singing two italian arias. He made jokes in between about how he didn’t know what they were about because the songs were in italian. But he confessed that he did actually know their meaning. Alfie was actually pretty funny throughout his set, which was a contrast to the more serious material he was performing. It really made for a good mix. He moved on from the opera world to the musical world performing “Wheels of a Dream” from Ragtime, which is a personal favorite. He performed a “Come What May” from the film, Moulin Rouge, and brought back a local three part all male group Gentri to perform another favorite of mine Tim Buckley’s “Song to the Siren”. I was really impressed with Gentri the way they were able to hold their own against the amazing talent of Mr. Boe. And it was nice to hear them with the sound ship shape. That had to be a special moment for them in their young career, and it really was a highlight of the evening. Then came the time of the evening we were all waiting for. Alfie performed songs from the musical Les Miserables. He chose two perfectly contrasting songs, one to show off his vocal range and his impressive vocal power, and two to bring the house down with a much different power, the power of emotion, and sincerity. The first song he performed was “Who Am I?” The instant he was finished with the number the entire arena launched to their feet, and roared their approval.

Alfie left and returned to sing what has become his signature song “Bring Him Home”. Now, he has to have sung this song thousands of times at this point, you would think he had just learned the song for this evening. This is one of my all time favorite songs, as I know it is for many others, so I can get a little too particular with how it’s performed. Well, this was easily one of the best performances of this song I have ever heard. He sang it with clarity and beauty, like throwing a rock in a glassy lake, and seeing the smooth ripples one at a time. He almost lead me to believe he was actually praying and pleading with God. Again, the crowd rose to their feet, many with tears running from their eyes. Alfie did not disappoint. I hope I have the opportunity to see him perform again. He understands the crowd, and understands how to move them emotionally, comedically, and bring them to a place where it seems the outside world stops, just to hear his voice. That is an talent you rarely find in the entire world, and we had him for a night, right in Utah County.

While the event is one I will not soon forget, I hope that in the future, the other artists are considered, as well as the audience. We all appreciate talent, especially from this great state, but when we come to seeing one of the best in the world, get to it already!!!