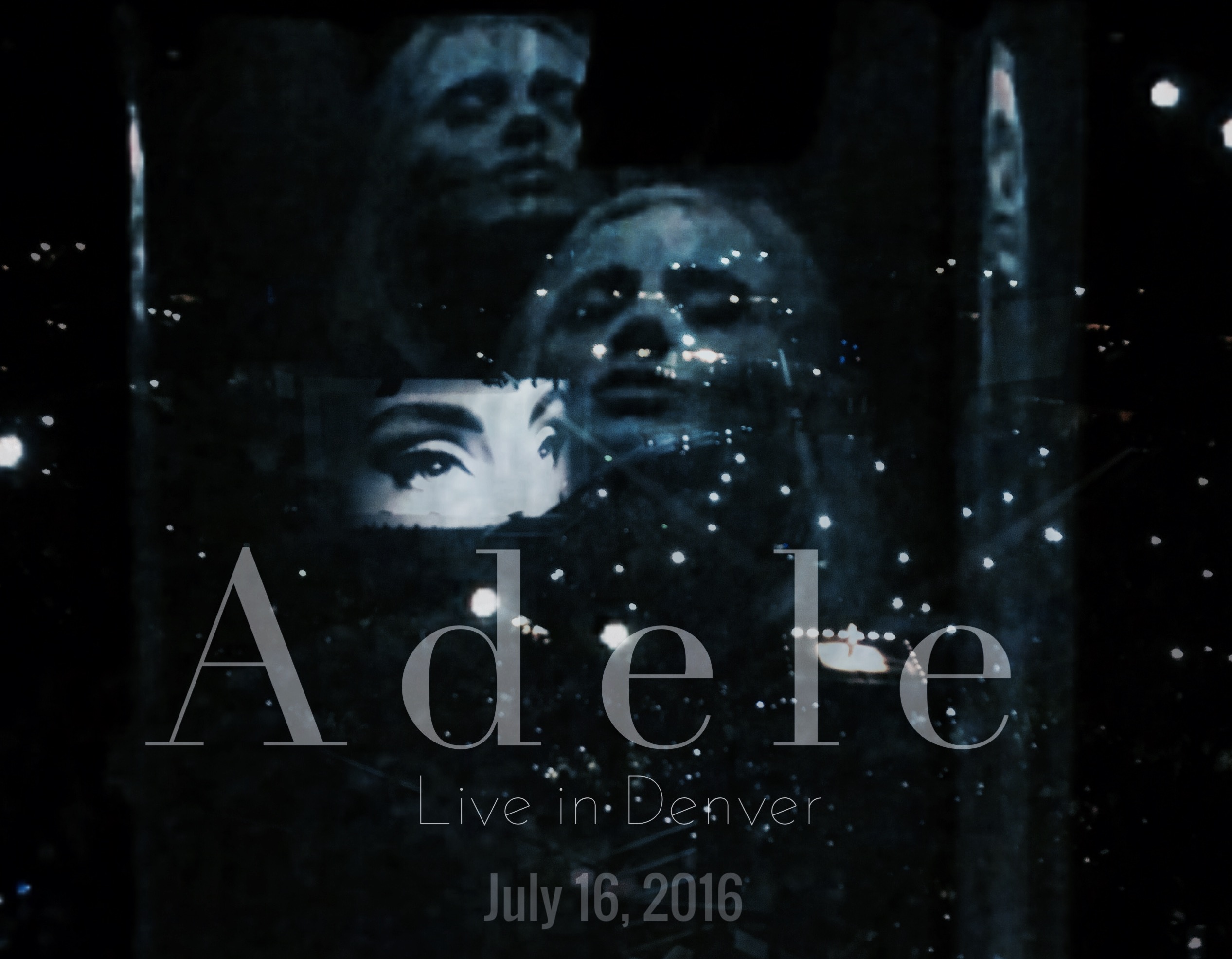 So it has been over a week since I saw  Adele in concert.  I saw her in Denver, and I don’t really do reviews outside of Utah.  It seems a little weird since we are Utah Concert Review!  But, I just can’t stop thinking about the show.  I have replayed it over and over in my head since I left the Pepsi Center.  So, I decided to do a write up on my experience anyway.  Therefore, I’m adding a new section to the website called “UCR On Tour”.  This is where I’ll put reviews of any shows I see outside of the beehive state.

So, Adele.  I have had the privilege of seeing many of the greats in concert.  And while I knew Adele was a great live singer, and accomplished performer, I didn’t think the show would make the impact it did.

I did a little research before the show, and I found out that Adele doesn’t have a supporting act, and she goes on right at 8 PM.  I’m glad I looked into it because most of the time I’ll show up during the opening set.  If I hadn’t looked into it, I would have missed a decent portion of the show.

I showed up to the Pepsi Center at 7:57.  I had planned my flight out perfectly so that I would have plenty of time to meet my sister and her husband (the generous ones who gave me this ticket as a Christmas present.) and get to the venue.  What I didn’t plan on was waiting in the car rental line for over 90 minutes!  So walking into the venue with three minutes until showtime was not ideal.  But I still had three minutes to get to my seat!

After climbing three massive flights of stairs, and sprinting to the other side of the venue, I made met my family, already seated, just as Adele appeared from below the stage!  I was out of breath (I know we’re in Utah, but he altitude in Denver is insane! Adele even said so!  She had oxygen ready back stage just in case!), I was sweating profusely, and yet, all I could think was “I made it!’, and “Wow, there she is.”.  And there she was indeed.  Rising from beneath a small stage, on my side of the venue, with the main stage, housing her exceptional band and backup singers on the opposite other end of the jam packed arena.  (You can see what I mean from the pictures and videos posted in this article.) Adele greeted the Denver audience, appropriately with her huge hit, “Hello”.

The amazing thing about concerts is although you are in the midst of thousands of other fans, the event can be quite a personal experience.  And this night was no exception.  When I was given this gift on Christmas Day, we were unaware that almost seven months later, this would be the last night my sister and her family would be spending as citizens of Colorado.  A life enriching opportunity was leading them Georgia.  So not only were we seeing one of our favorite artists, they were also being given a spectacular send off.

Which brings me one of my favorite Adele songs “Hometown Glory”.  As expected, the crowd roared upon hearing the first few notes of the popular song off of her debut album.  The enormous screen show pictures of Adele’s hometown of London, England.  Midway through the song, the backdrop changed to some of the most beautiful panoramic views of downtown Denver that I have ever seen.  To no surprise, the local audience went crazy.  While I’m sure this happens in every tour stop, it really adds a nice touch, and for my sister and brother in law, it was a very touching moment.  In a room of almost 20,000 fans, Adele gave them a very personal, private, and poignant farewell to the beautiful city they had called home.

Now, just in case Adele decides to come to Salt Lake City, I won’t spoil all of the events that transpired that night.  I’lI finish this article by sharing the two things that stood out the most to me.

One, her interaction with the crowd.  She was so good with the audience.  I heard it mentioned several times in my seats way back in Booniville, “How can we be this far back, and she’s making us feel like we’re in the front row?”  My sister said it, the girls behind me said it, and the couple on the other side of the aisle said it. And it was true.  She spoke to us as if we were old friends from school handing out again.  She brought fans on stage.  She took the time to take selfies with them.  She crouched down so she could fit into the camera frame of fans on the floor taking selfies. She told stories about her time in Denver, and about her life.  She was so relatable, even though she is a huge huge star.  For all I know, it could just be an act.  And if it is, she’s as good at seeming genuine, as she is at singing.  No one is that good at pretending to be awesome.

And secondly, her voice.  What a voice!  I know what you’re thinking.  “Duh, of course she has a good voice.  I’m pretty sure her platinum records, and sold out world tour should have told you that.”.  And you’re right, I knew that.  That’s why I wanted to see her live.  So, Duh to you!  But how impressive is it, that even though I already knew she was an amazing vocalist, and performer, she still blew me away beyond my expectations? She far exceeded anything that I had hoped for.  And I was already expecting greatness.  This woman has a very unique gift.

I consider myself very fortunate to see Adele when her career is this white hot.  She might stay this way for years to come, but I think it’s impossible for it to go any better.  She’s had three albums that are just about perfect, her voice is in peak form, and she still loves what she does.  It’s obvious that even though we were her 55th show of 105, she was still excited to perform for us, and to bring us her songs.  I say this a lot, but I truly mean that this is a night I won’t forget.  This show moved into the top five of all the shows I’ve ever seen.  No frills, no dance routines, no killer guitar solos necessary, just a gifted and talented woman..  It was a perfect night.

Set list:
Hello
Hometown Glory
One and Only
Rumour Has It
Water Under the Bridge
Skyfall
Million Years Ago
Send My Love (to Your New Lover)
Make You Feel My Love
Sweetest Devotion
Chasing Pavements
Someone Like You
Set Fire to the Rain

Encore:
When We Were Young
Rolling in the Deep