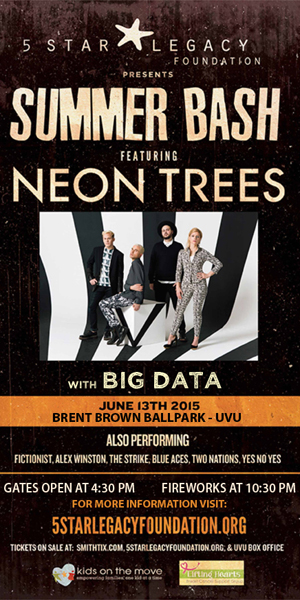 To have the opportunity to see a band that has become an international success, come back and perform in their hometown is a unique and special experience. There are some bands that don’t even claim to be where their actually from if it doesn’t seem cool enough. Some band are from such a big place like New York or Los Angeles, that a hometown show might not have the same feeling unless it’s someone like Bruce Springsteen in Jersey, or U2 in Dublin. But on a smaller scale, yet still applicable, I was able to see Neon Trees return to Utah County to do a homecoming show at the inaugural 5 Star Legacy Foundation Summer Bash at Utah Valley University’s Brent Brown Baseball Stadium. Neon Trees is a band I have really enjoyed over the years, and have always wanted to see live. They put the perfect mix of classic New Wave, with a modern touch. This is music made for my ears.

When this new summer festival was announced I was really excited to attend, and looked forward to seeing all the bands. Unfortunately there were circumstances that made it so I was only able to make it in time for Neon Trees. So my apologies to the other bands. I’m sure you were great, and I hope I get to see your shows soon.

Now, in case you missed it, yes, this concert took place in college baseball stadium. When I first walked in, I had some concerns about the setup. The stage was located in center field, the infield was blocked off of to prevent any damage, and there seemed to be a variety of things going on in different parts of the ballpark that gave off more of a county fair vibe than a concert festival. Food trucks in left field, blankets sprawled out behind second base, families sitting in the stands behind home plate eating hot dogs, booths for who knows what in right field, I was concerned that this wouldn’t quite have the concert feel I had hoped for. But, as I moved past the blankets, the tents, the soundboard and into the crowd, it was easy to forget I was in a baseball stadium, and it all seemed just like any outdoor concert I’ve been to.

Just about the entire outfield was full of people, and from the get go, they were high energy. Neon Trees opened with what I believe is their new single “Songs I Can’t Listen To”. They had the fans from there. Lead singer Tyler Glenn mentioned a number of times that they were excited to be back playing to their hometown crowd, and stating one time that “we have never claimed to be from anywhere but Provo, Utah!”, much to the delight of the crowd. 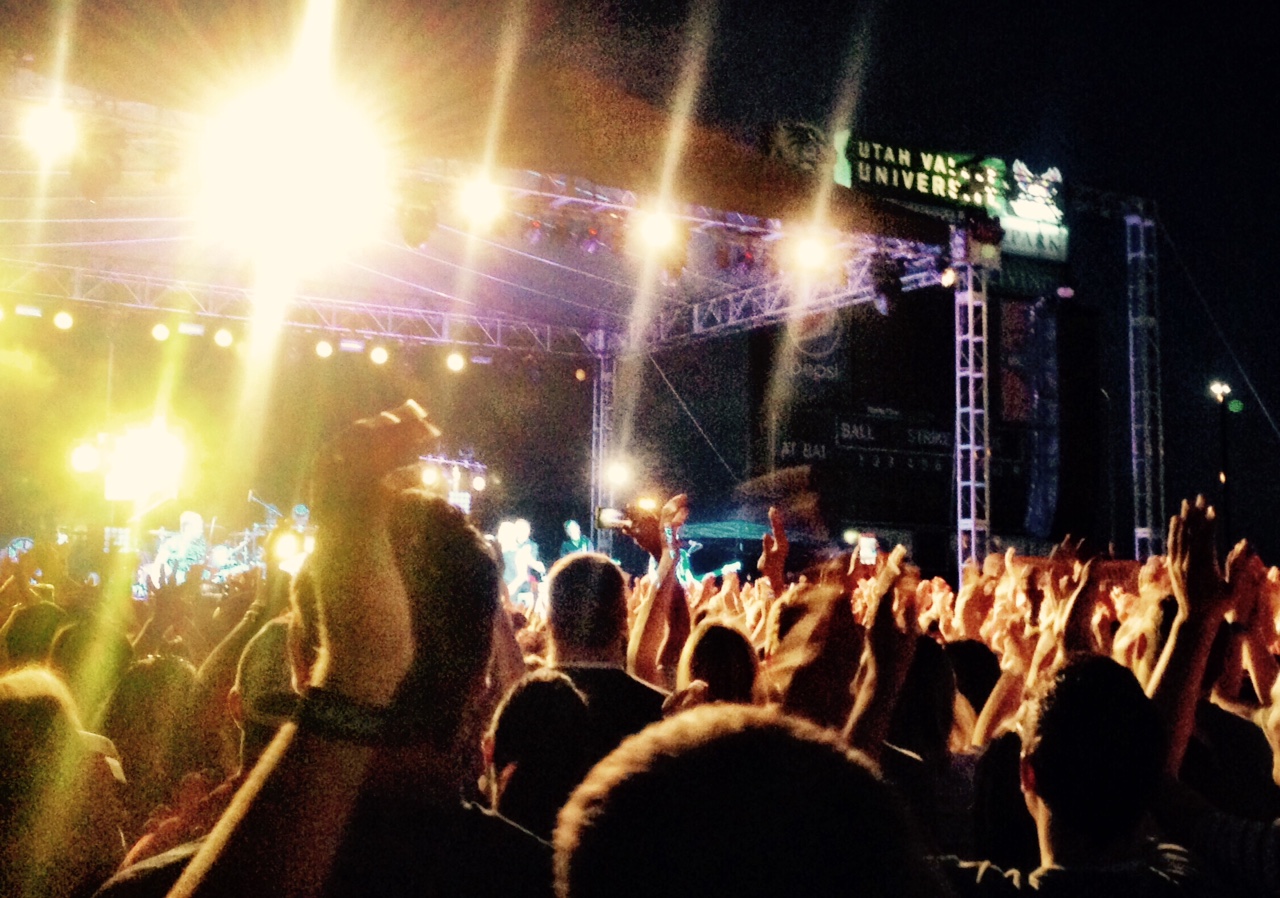 I thought Tyler Glenn sounded amazing live. He has a unique voice and while there may have been some signs of wear and tear on his voice from the road, he covered it all perfectly. There were times where I was anticipating a big note, and thinking to myself, ‘how is he going to hit this?’, and sure enough, he nailed it. Very impressive. I thought he did a great job of sharing personal yet universal messages with the crowd. He gave an inspiring speech about various times of his life when people told him he couldn’t be a certain way, from a Mormon missionary, to being too flamboyant on stage, to still holding on to his beliefs while being openly gay. This led to an inspired version of their song “First Things First”. The crowd seemed to turn into gospel choir at times, and left the crowd feeling uplifted.

While Chris Allen, and Branden Campbell are excellent at lead guitar and bass respectively, I found it difficult to take my focus away from Elaine Bradley on drums. She is an exceptional drummer in my opinion, and I wasn’t aware that she had such a good singing voice! When Elaine and Tyler would harmonize, it was magic. This is probably old news to those who have seen Neon Trees before, but this being my first time, it was a pleasant bonus to the show. I was really impressed.

I imagine for time constraints, they decided to forgo the traditional stage walk off after “Sleeping With a Friend”, and performed their encore straight away starting with an incredible cover version of the classic “80’s” hit “Come on Eileen”! They had the crowd in a frenzie! It was really a fun moment in the show.

If I was to complain about anything it would be two things that have nothing to do with the band. First, while Neon Trees were performing, the crew was taking down a side stage that I imagine was used for going back and forth between opening bands to save time switching one band to another. I get wanting to get going on take down so you’re not there all night, but this stage was right next to the main stage, and some of the equipment being taken down was loud and totally distracting. I hope this was just a rookie move considering it was the first Summer Bash, but it’s just something you don’t do. You have a fantastic headlining band, doing a homecoming show, you gotta make sure all eyes are on them. I could see the crowd looking over, annoyed that they had to battle hearing the band they came to see, and a bunch of clanking metal.

Second, at the end of the show, when Neon Trees was performing their final song “Everybody Talks”, fireworks begin to go off. Now don’t get me wrong, I have no problem with fireworks going off when a band is performing. It happens a lot at outdoor shows, and it brings an added excitement to the finale. But, generally the fireworks go off above or behind the stage. These fireworks were going off over by third base. Remember, the main stage was in center field of the baseball stadium. So right when the band was reaching their ultimate crescendo, at least half the audience looks to their left to start watching fireworks going off. This could have been a really cool moment, but instead, I found it to be really unfair to the band to have to battle with what ended up being another distraction. But to give credit to Neon Trees, they didn’t seem affected by it, and perhaps took the challenge head on, because they raised their energy level even more, and won back the crowd.

I’m glad I finally got to see Neon Trees live. As previously mentioned, I’ve wanted to see them for a while, and I just missed seeing them open for The Killers back in 2008. I figured I’d be seeing them soon, but I ended up waiting seven years. Well they were worth it, and I hope to see them again soon. This is a band with actual talent, and I hope we get to see what else they do because I believe the best is yet to come.

Setlist:
Songs I Can’t Listen To
Sins of My Youth
Your Surrender
Calling My Name
1983
Animal
In the Next Room
Moving in the Dark
Mad Love
Love In the 21st Century
Lessons in Love (All Day, All Night)
Still Young
First Things First
Sleeping With a Friend

Encore:
Come On Eileen
Everybody Talks