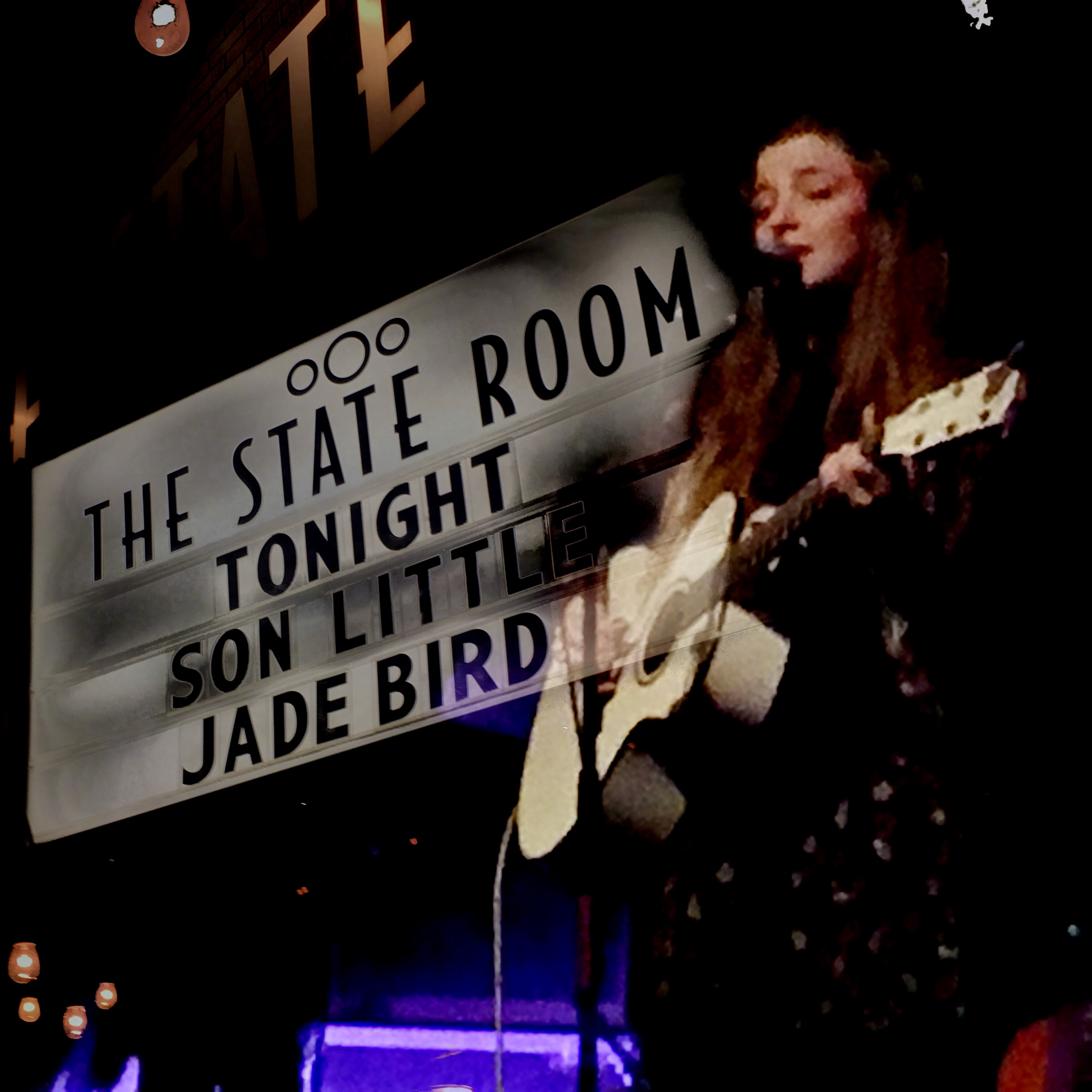 Getting the opportunity to be the support act on a  tour is a  great opportunity for an up and coming artist to get their music heard by those who might not be familiar with their work.  That being said, I generally get nervous for these artists who open the show for the headliner because I’d imagine that it’s not their ideal situation to be performing in.  The audience isn’t necessarily there to see them, the venue is half full at best, and the sound isn’t always perfect for them.  In my experience more times than not, if the opener isn’t known, the audience tends to ignore them by talking with their friends and paying very little attention. This was not the case when Jade Bird performed at The State Room in support of Son Little on Tuesday night.

The State Room is a venue I don’t get to as often as I’d like, but it’s one of my favorite places to see a concert in Utah. I have never been disappointed with any of the shows I’ve seen there.  They have an open floor with a few dimly lit pub tables scattered throughout.  Behind the floor is a seating area that looks like it could have been pews from a church at one point.  I like the way the sound resonates in the room, and there isn’t a bad spot in the venue.

Jade walked out to a half-full venue by herself bringing only a white acoustic guitar with her to the stage.  She said some brief hellos and jumped right into her set.  I noticed a number of the audience members questioning whether Jade had a British accent or not.  Her singing voice doesn’t really display any type of accent so I could tell they weren’t exactly sure.  Especially because Jade’s music is blues and country influenced.  It was fun for me to know of her British background already and watch the audience delight in her speaking voice then blended with the type of music she was playing.  I think it may have contributed to initially gaining the audience’s attention.

Now if I had to guess, I would say that maybe ten people knew who Jade was.  This was a real opportunity for Jade to gain some new fans and it was obvious that she did exactly that.  Jade played songs mostly from her five-song EP Something American.  Initially, the crowd was polite in their applause, but then they really started to warm up as the show progressed.  She sang the title track to her EP and as she was singing the song I noticed a number of people walk from the seated area to the middle of the floor.  I saw heads begin to bob as she went through her set. By shows end Jade had the audience clapping along.  She attempted a new song called “Anniversary”.  Jade joked that she had made it through the song only once out of three attempts so she was hoping to even it out with this performance.  She was flying through the song brilliantly when all of a sudden she stopped and said “I lost it!” inferring that she couldn’t remember how the rest of the song went.  The audience just cheered their support as Jade just laughed it off.

The highlight for me and from what I gathered was the highlight for the rest in attendance was when Jade did a Johnny Cash medley.  She sang “Cocaine Blues”, “Folsom Prison Blues”, and “Ring of Fire”.  This really got the audience going.  They were clapping and singing along.  I thought Jade did a great job of making these songs her own while at the same time staying true to the original arrangements. When Jade finished the medley she received her biggest ovation of the night.

By this point, the floor was mostly full and Jade had their full attention.  I really need to hand it to this audience.  I couldn’t hear anyone talking.  In fact, I actually heard a pen drop.  That’s right, a pen.  It was so silent in The State Room that when someone pulled their phone from their pocket and a pen fell to the floor on the other side of the venue from where I was standing I could actually hear it when it hit the ground.  Jade even thanked the crowd for how engaged they were.  Like I mentioned, this is not always the case for support acts so I could tell that Jade was really enjoying the respect she was being paid.

Other than the Johnny Cash songs, my favorite moment of the show was when Jade sang my favorite song on her EP “Cathedral”.  I noticed a few fans in the front singing every word of the song.  Jade even looked at them and smiled with a surprise that someone in a very unfamiliar town for her, knew the lyrics to one of her songs.

Jade has a beautiful singing voice and a really fun stage presence.  I’m happy I was able to see her this early in her career because I really think we’ll be hearing a lot more from her in the future. It’s an amazing thing to witness when an artist has the opportunity to introduce themselves to a new town and they leave having gained more fans than they came in with.  That’s what happened with Jade Bird.  I fully expect her to be the headlining shows in Salt Lake City in the future.