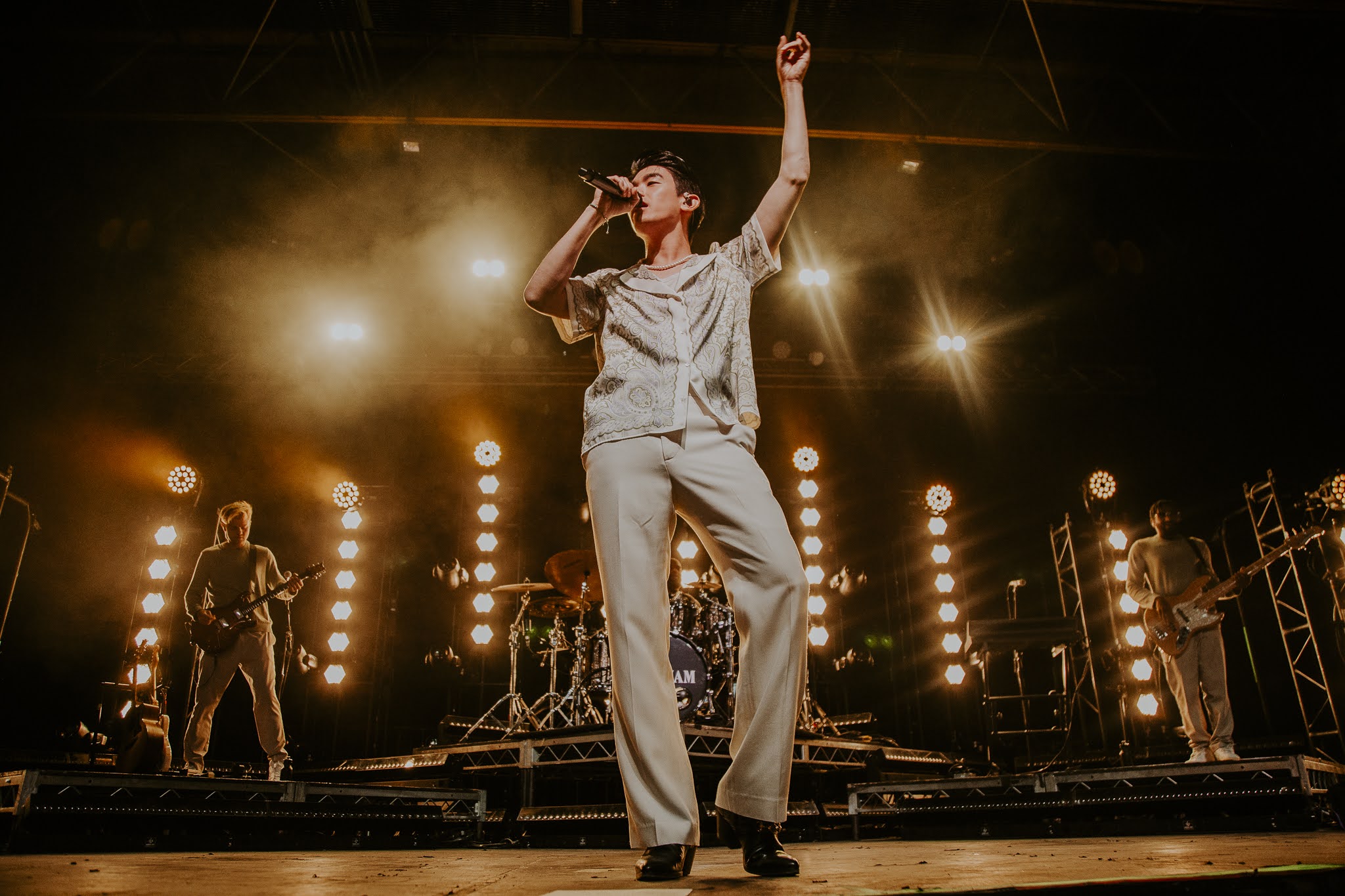 Review and Photos by Vanessa Holt

Eric Nam began his There And Back Again Tour in late January in celebration of his brand new album. Salt Lake City has been anxious to see Nam for the first time here in Utah. Doors opened and fans rushed in! There was a constant buzz of excitement. Fans kept themselves busy while waiting for the show to start by singing along to the songs playing over the speakers. The songs consisted of trendsetting artists from Dua Lipa, Kid LAROI, Halsey, to Harry Styles. I could hear fans discussing amongst each other what outfit Eric Nam would step out in. Nam’s steller concert outfits are one of the many things he’s known for.

As Lyn Lapid made her way to the stage fans caught a glimpse of her through the curtain and went wild screaming how much they loved her. Many people in the crowd knew of Lyn Lapid mainly from TikTok. She is one of the few artists who has blown up from the app. Many of her songs are currently trending. Her setlist was curated with a variety of different songs from a cover of her current favorite song, “Dandelion” from Ruth B to a new and unreleased song, “How Could I Ever Love You?”

Lapid stated that the new single is dedicated to anyone who’s gone through a breakup. She suggested that everyone’s mindset for the year should be to stop doing “charity work” by falling into relationships with people who don’t give as much effort back and start to prioritize yourself. During the set, Lapid had caught a glimpse of a fan’s sign at the barricade that was asking if she would be their valentine. She graciously accepted and hopped off stage to sign their board. She went on to express her gratitude for everyone’s support through the night and for showing up early to hear her perform. Lapid was beyond grateful that Eric Nam brought her out on this tour. Before stepping off for the night she had the entire crowd chanting for Eric to get him excited about stepping out on stage.

It was a quick transition after Lyn Lapid. The minute Eric Nam set foot on stage I knew it was going to be a great set. From the very beginning; Eric, his band, and his dancers had this energy that stayed strong all night. With it being his first time in Utah fans did not hold back on displaying their excitement. They were so happy to be able to witness him perform live in their hometown and not have to travel hours to see him. After the first three songs, he greeted the crowd, “Hi I’m Eric Nam. Welcome to my Ted Talk. My shows are pretty much like Ted Talks with a little bit of music in between. We’re going to solely focus on manifesting your destiny and focusing on positive thoughts. So buckle in everyone, we’re in for a long night.”

Eric stayed true to his word, his show had felt like a comedy show and the music just felt like a plus. He soaked up every second that he got to interact with the crowd. Eric observed everyone’s signs. His overall conclusion was, that it was outrageous due to the fact that many of them had asked for him to “throw there and back”. A quirky reference to his album title. One said “Eric you’re papi material.” He made a quick statement, “All of your signs are dirty. This is a family show! Not a thirst session. The only age-appropriate one is asking me to be their valentine.”

While there were over a thousand people in the room that night, the way that he interacted with everyone made it feel like we were all in a smaller room. We were getting the best version of him possible, especially when he slowed down the set. It was just him and his guitarist with an acoustic guitar. He let the crowd pick out what song they wanted to hear from him.

He asked a series of questions. Who had seen him before? Which was only a handful of people. And who was seeing him for the first time tonight? Which was the majority of the room. He had even gone out of his way to ask a question that I’ve never heard an artist ask before. “Who is here against their will? In every show I have there is always a chaperone. Whether it’s a mother, father, sibling, grandparent and they’re usually standing off in the corner with their arms crossed counting down the minutes till the show is over. That’s totally okay! I appreciate you playing a part in getting my fan to the show. I hope you get to enjoy the night in some sense.”

While it was true that there was a wide range of people there with absolutely no idea who Eric Nam was and what his music was, there wasn’t a single person in the venue who didn’t seem too bored being there. It was my first time seeing Eric Nam and I had just become a fan of his two weeks prior. But after this show, he resides high on my list of favorite artists that I’ve seen live.

It was a dream come true for many fans that night. It’s rare for Korean artists to do a full US tour and even more rare for there to be a Utah stop. It was a blessing all around and Utah made quite the impression on the Nam. He promised he’ll try his best to return again. Especially when we the fans played a big part in making the night so fun.