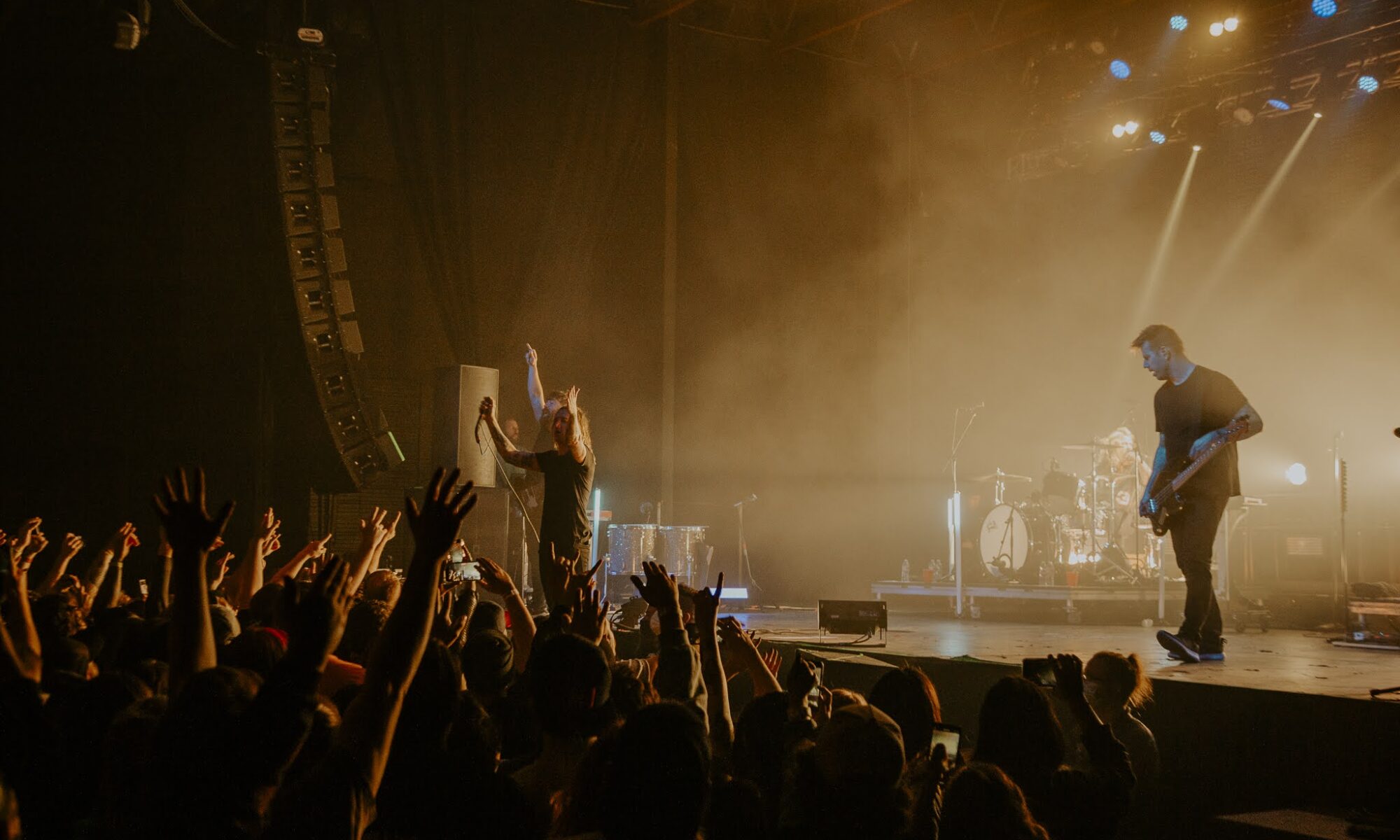 It’s been what feels like a long wait, since the release of Underoath’s latest album, Voyeurist. The full-length run of their North American tour was announced in August of 2021 and officially kicked off in February of this year. The tour lineup started as Underoath, Every Time I Die, and Spiritbox. Then due to drastic changes earlier this year that Every Time I Die endured, the lineup took a quick change. And Bad Omens and Stray From The Path were added. There was no doubt that there was heartbreak not being able to see Every Time I Die who’s been a band for so long on tour with Underoath. But there also wasn’t going to be any type of disappointment for the two new bands. I’m always excited to attend any shows but there was something about this one specifically with this lineup that had me anticipating it for days.

Stray From the Path

Stray From the Path kicked off the night. They are one of the best bands to open up for anyone. Their music falls under the hardcore genre meaning the entire set is nothing but moshpits and circle pits. I’ve only seen the band play in smaller venues like In The Venue and The Loading Dock where fans had the chance to stage dive. Being on the Rockwell side of The Complex prevented them from doing so. But that didn’t stop fans from giving it their all.

Many of their songs address controversial topics which can cause a quick conversation amongst people. But it has never been in the way of Stray From the Path forcing their opinions onto someone. They reminded others that shows are supposed to be a safe place where everyone is welcome. They played a few of their older songs such as “Badge & A Bullet” and “The House Always Wins” along with a few of their newer ones such as “Fortune Teller” off their last album, Internal Atomics, and their newest single, “Guillotine”. The single was released just two days before they joined the Voyeurist tour. Having it on the setlist that soon after the release was great to hear. Stray From The Path had only been on the tour for a few days but vocalist Drew Dijorio thought it was one of the top 3 shows so far.

I’m a pretty big fan of Bad Omens. This was going to be my first time seeing them live, and they didn’t disappoint in the slightest. The band’s setlist consisted of a majority of their newer songs off of their latest album, The Death of Peace of Mind. Which has become one of my few albums of the year. The first four songs were their singles off the album; “THE DEATH OF PEACE OF MIND”, “ARTIFICIAL SUICIDE”, “Like A Villian”, and “What Do You Want From Me”? The singles were a clear insight of how new this era of Bad Omens is, while they still kept to the heavier elements. Meaning we still got to hear his deep and low unclean vocals, which gave me chills hearing live. They incorporated newer sounds that fit so well for the band.

Before starting each track, the lights would dim and a recorded track would play before the band started on the next song. During “ARTIFICAL SUICIDE” vocalist, Noah Sebastian stepped out in a ski mask. It made his presence even more intimidating with a black trenchcoat. The entire execution of it all made it one of the best performances I’ve ever seen. For the fans who’ve known Bad Omens for some time, they played a few older songs like, “Never Know” and “Limits” which the majority of the crowd was singing along to. They saved the best for last, “Dethrone”. Sebastian had one question before starting, “Are you ready to go crazy? I want to see you all lose it in the circle pit.”.  I believe it’s one of their heaviest songs to date. The circle pit was one of the biggest I’ve seen that lasted the whole song.

There are no words to express how much I was looking forward to seeing Spiritbox perform. This tour was one of the first US tours they’ve been on. Everyone I’ve known has told me that Spiritbox puts on an unbelievable performance and vocalist Courtney LaPlante’s vocals are some of the best to hear live. The entire crowd had shown up with the same amount of excitement to see the band. It felt like everyone in the crowd was singing along to their songs. The majority were off of their latest album, Eternal Blue. When people first hear Spiritbox on any streaming service, some think that all the unclean vocals are covered by someone else in the band. Everyone ends up blown away once they learn it’s all done by LaPlante herself.

She had one of the strongest and most intimidating stage presence I’ve ever seen. While most vocalists wander the stage constantly bouncing around back and forth, a lot of her time was spent at the mic stand when headbanging during intros or breakdowns, every second was still captivating. They ended the set with “Eternal Blue”, which is one of my favorite tracks. It has fewer vocals and more instrumental. Before starting the song LaPlante had stated, “Feel whatever you need to during this song, let the emotions take over and I’ll feel it too.”. The energy in the entire room had calmed. It was a peaceful moment to enjoy being in that room surrounded by other fans and listening to this amazing song.

Everyone was singing but it wasn’t the type of song to be screaming lyrics at the top of your lungs. Our voices seemed to blend so well with LaPlante’s. For those who came to the show and had never heard of Spiritbox before, they left as fans. There was no doubt that when the time comes that Spiritbox does a US headlining tour there is going to be a major turnout.

I haven’t seen Underoath since 2018 on their last headlining tour. It’s been long overdue and many fans were unsure if we would ever get to see them again. I was impressed with this tour specifically because it had as much fan interaction as possible. Despite being high up on the stage, vocalist, Spencer Chamberlain hopped down onto the speakers to get as close as possible. Parts of their setlist were picked by fans. Including one of their encore songs, “Thorn” that won on a Twitter vote. “We are so happy to be back in Salt Lake City. Thank you for showing up and selling out the show,” Chamberlain stated. “We’re happy to be here with our friends, Stray From The Path who we’ve known for 10 years. And our new friends in Spiritbox and Bad Omens.”

Underoath has been in the scene for quite some time. Every time I’ve managed to see them whether it was a headlining tour, opening for a band, or playing a short set on a festival lineup, the energy the band of six brings to the stage is crazy. Even from the back, drummer Aaron Gilipsie gives it his all. Chamberlain on the early half of their set, “our guitarist, James Smith got food poisoning last night and he’s not feeling too good, give him a round of applause!” The crowd cheered him on. “We had one of our techs Andy learn the songs last minute in case he couldn’t do it. I know you’re not feeling good James but you’re killing it.” Chamberlain exclaimed.

His encouraging words to his bandmate were true. For someone who spent a lot of their day not feeling the greatest he still put on a good show. When they stepped out for their encore and asked whether or not we wanted one or two songs, someone from the crowd asked for three. Chamberlain joked, “James has food poisoning! This guy is trying to kill him by asking for three songs.” While the tour was announced after their album came out, most bands would play the album front to back. But it was the perfect mix of their newer songs and older songs to satisfy all fans across the board. Leaving that night a ton of fans were raving about how this is one of the best shows of the year.