Thirty-four years ago today, the song “Do They Know It’s Christmas” by Band Aid was released.  Boomtown Rats frontman Bob Geldof saw a report on the BBC about the famine in Africa and desperately wanted to help.  He recruited Ultravox frontman, Midge Ure, to write a song with him in the hopes of raising $100,000 for famine relief.  They wrote the song in a few days, and then they took to their individual assignments in getting this project off the ground.

Midge locked himself in the studio, recording, arranging, and producing the track so that it would be ready when the time came to add vocals.  That was Geldof’s job. Bob Geldof went on a mission to form a one-off supergroup by recruiting some of the biggest voices in British music of the day.  He didn’t go through managers or publicists. He went straight to the artists themselves. He recruited the likes of Bono of U2, Boy George of Culture Club, Simon Lebon of Duran Duran, Tony Hadley of Spandau Ballet, and George Michael of Wham.  These vocalists along with many others agreed to show up and record this song over a 24 hour period. The song was recorded and released the very next day. It was the fastest selling single in UK chart history selling 1 million copies in the first week and has sold almost 4 million copies in the UK to date and about 13 million worldwide.  The song did not raise $100,000 dollars. However, within a year of its release, the song had raised $8 million. The success of the song drove Geldof and Ure to put together one of the greatest concert festivals of all time, Live Aid.

A while back I spoke with Midge Ure, and he shared some of his thoughts and memories of the song “Do They Know it’s Christmas”.  I thought the information he shared was really interesting. Especially since It’s a song I look forward to hearing every year around Christmastime. I’d like to share it with you.  Enjoy!

Utah Concert Review:  Looking back at the release of “Do They Know it’s Christmas”, that was a huge event when it happened!  All these years later, what are some of your thoughts on that song, and the experience you’ve had recording it?

Midge Ure:  I think of the song as a bastard child.  It’s mine, but it’s not part of my family.  Has it outlived it’s welcome? I don’t think so.  I think people hear it on the radio now and it’s just another Christmas song.  The fact that it’s still being played now, you have to understand that when we did that song, neither Bob or I thought the song would ever get played the year after.  We only thought about that one Christmas. That was it. We’re not very clever. It never struck us that it was now an established Christmas song. So, I’m afraid you’re going to hear that song for the rest of your life.  Because it’s in there with “Jingle Bells”, or at least the songs from Elton John (“Step Into Christmas”) or George Michael (Wham’s “Last Christmas”) songs. So that’s fine. 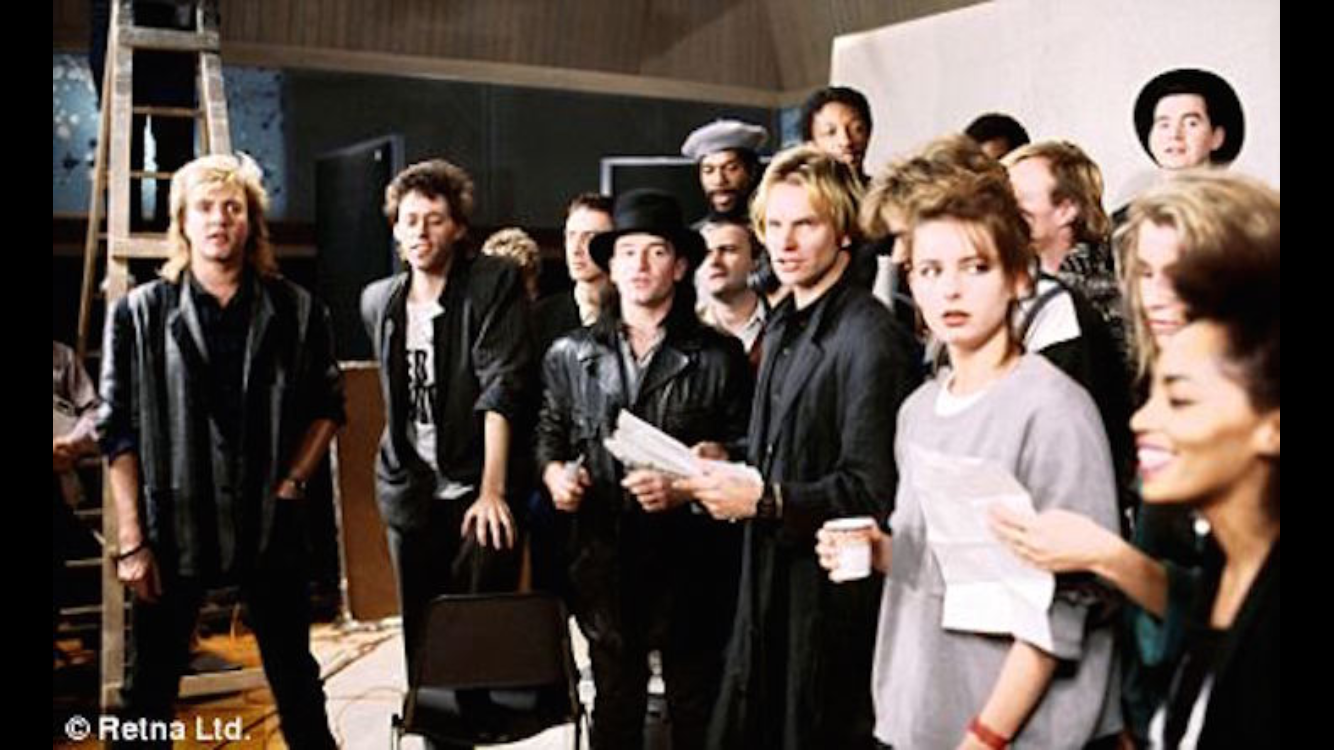 Looking back at that period, it was a great period!  It wasn’t a great song, but it was a great record. And that’s me flipping the coin there. I can say that it’s not a great song because I co-wrote it. I can say it’s a great record because I produced it and played all the instruments.  It did its job absolutely brilliantly. So just being part of it. Seeing this moment, something that other artists attempted to do and failed. Pulling other artists together for a cause, to use an industry that was notoriously selfish, and turn around to do something for someone else.  To be part of the first one that did that, was just amazing. It was like dropping a pebble in a pond, and the ripples going out. We were the pebble. Then there was USA for Africa, then there was Northern Lights in Canada and it just kept going and going and going.  Yes, it does wear thin. I think it’s not the answer to everything.  Making a record and putting a concert together. But it did a great job.

You know, there are people alive today who wouldn’t have been had we not done that.  And that is the bottom line. There’s nothing else. It doesn’t matter, the big figures, the money, what’s going on.  The fact that we’re still doing it all these years later. Bob and I are still Band Aid trustees. We still oversee that any income that comes from every time it’s played on the radio, the songwriting royalties go straight to the Band Aid trust and it funds yet another thing out there. So it worked incredibly well!