Is there anything better in live music than being blown away by a performance?  I would venture to say, No. We all attend concerts because we’re going to see a band or musical artist that we like.  But even when we’re expecting a good show, and to love the songs, there are those amazing times where things just go way beyond our expectations.  That was my experience on Monday night with Jessie J. I’ve always loved her voice, and the few times I’ve seen her interviewed I’ve enjoyed her personality, but I never thought her concert would be this entertaining.  On every level, I was entertained! I laughed, I was moved, I was excited, and overall I was impressed with the show.

Jessie J broke her show into four segments titled Realisations, Obsessions, Sex, Empowerment which also are the titles of her four EP’s, and what make up the title of her current tour, R.O.S.E.

Jessie opened the show with “Think About That” from her Realisations EP.  The moment she appeared Jessie J had the audience totally captivated, and complete command of the stage.  Her voice immediately impressed me. She mentioned at one point during the show that her voice was tired. I can’t imagine it sounds any better at “full strength”.  She either knows her voice so well that she knows how to mask any weariness in her voice, or she was just being modest because I didn’t notice any vocal fatigue. Her voice was on point in every single song.  I couldn’t get over it. I still can’t. She sounded incredible.

It wasn’t until after the third or fourth song that Jessie officially addressed the audience.  At first, I wondered if she was the type of performer who didn’t engage much with her fans or say much during a show.  I was totally wrong about that. Not only did she speak a lot throughout the show, but she seemed intent on engaging and connecting with as many fans as possible.  She talked about how she cruised through downtown Salt Lake City with her crew on some Bird Scooters. She pointed out someone in the crowd who she met on that adventure and got their email address and gave them a couple tickets to the show.  She seemed delighted to see them there in the front row. I thought that was such a cool gesture, and it went over really well with the audience.

Jessie J told the audience the four rules she expects everyone to abide by at her show.

Clearly rules three and four were jokes.  Jessie’s sarcastic wit would be a predominant theme throughout the show.

The Realisations segment ended with  “Easy On Me”. She talked about how her grandfather sent her a voice message just days before he passed away.  When the song finished, Jessie left the stage and her grandfather’s message played through the speakers. It was a little difficult to make out his words due to his thick cockney accent. I pride myself on being able to hear through accents, but this one was pretty thick!  While I couldn’t make out the words, the tone was clear. He definitely loved his granddaughter. His message ended with him making three kissing sounds. It was a very touching moment.

Jessie J then moved to her Obsessions segment. This was probably the quickest segment of the show.  After singing “Petty” she mentioned that she didn’t know how the audience wasn’t dancing more after hearing a song like that.  Everything she was saying was in jest, or with sarcasm so it wasn’t like she was really coming down on the crowd.  Honestly, I think the crowd was in awe of her. People were moving, but they just seemed so drawn to her that they just kind of stopped and stared during some of the songs.  They wouldn’t stay that way for long. The show was so high energy that it was impossible to not start dancing at some point.

The Sex segment was where I thought Jessie did some of her best crowd work.  She spoke to what looked like a young married couple on a date night. Turns out they had three kids.  Of course being in Utah, that doesn’t preclude them from being very young still. She even joked after singing “Dangerous” that baby number four would be on its way following the show.  She also spoke to a group of girls up in the balcony, discovering that they came from Las Vegas for the show. One of the girls was from Jessie J’s home country of England. Jessie was so natural in the way she conversed with them that I almost forgot I was at a concert.  It was as if people were chatting at a party.

The fourth and final segment was of course Empowerment.  This was the most hit-filled segment. With a song like “Bang Bang”, the crowd was most definitely moving now.  The Depot was transformed into a full blown dance club. Jessie told us that she was close to breaking the city curfew so she had to cut a song.  She gave us the option of performing “I Believe in Love” or performing “Price Tag” and “Domino”. It came to no surprise to her or anyone else that the crowd chose the latter.   But in true Jessie J fashion, she still sang about a thirty-second clip of “I Believe in Love”. I’m sure there were some who were really hoping to get the full song, but I thought it was pretty cool that she gave the crowd at least a snippet.

I’m not sure if Jessie usually does the whole encore thing or not, as was previously mentioned, she was running out of time. So she stayed on stage and performed “Price Tag” then ended with “Domino”.  Despite the time constraints, she didn’t rush through the songs, she performed them with the same attention and energy that she had performed the entire set.

It was impossible to leave The Depot without being totally blown away by what just took place.  It’s as fan friendly a show as I’ve ever seen. She praised a father who brought his daughter to the show, inviting him to bring his young daughter to watch from in front of the barricade.  She would tell fans not to look away when she looked at them. She wanted to make eye contact with every person there if she could. She would tell people to put their phones down and dance.  Jessie J wanted to create a moment not only for her but for every person in attendance. I left completely entertained, and more impressed with her than I was before the show began. 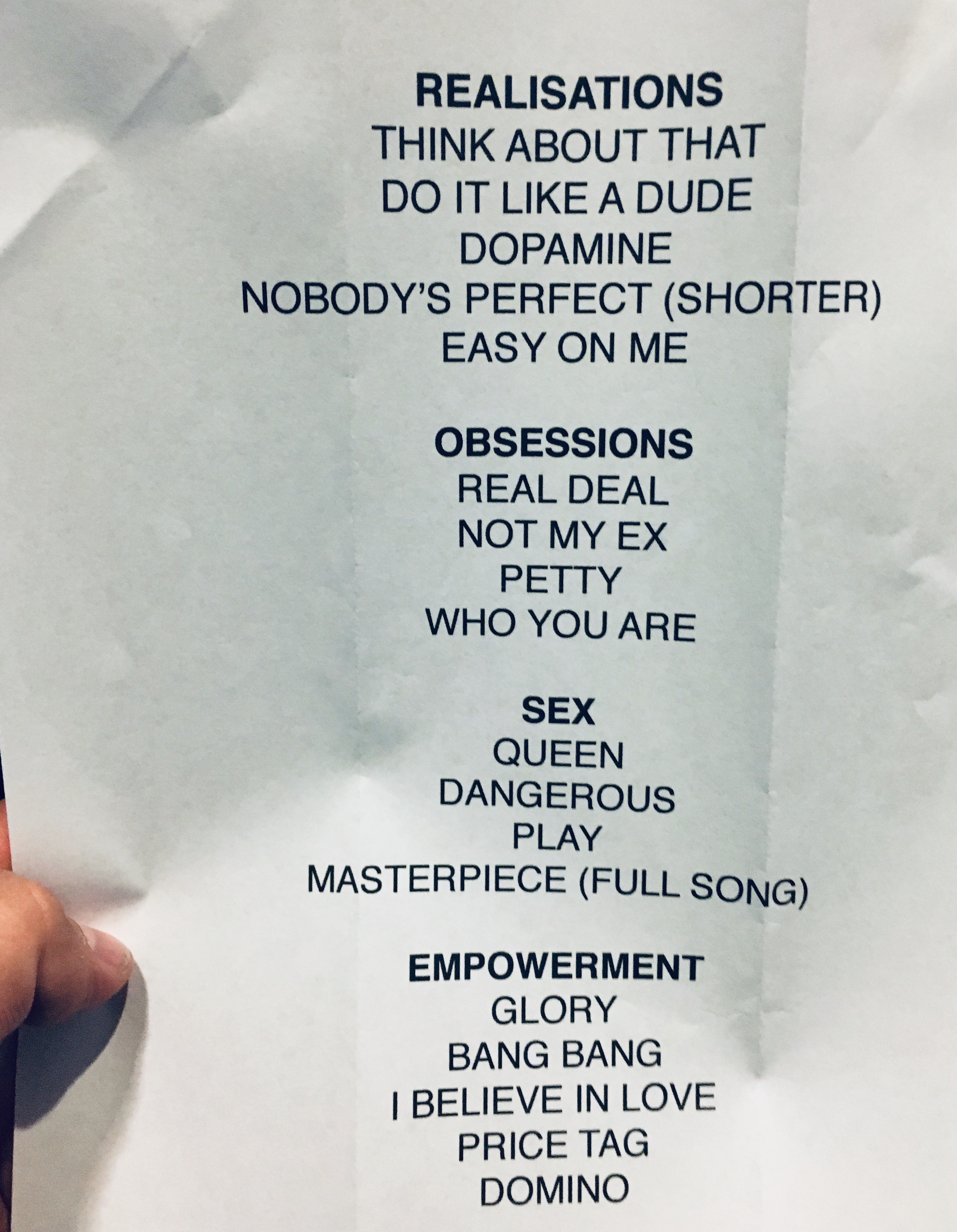